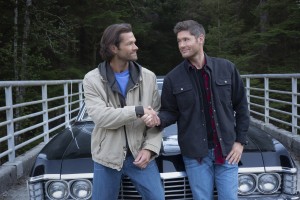 SUPERNATURAL does several smart things with its series finale. The first and most important is to end in a way that doesn’t make longtime fans want to kill themselves or other people.

That aside, SUPERNATURAL spreads its denouement over two hours, the documentary “The Long Road Home,” and the actual last episode, “Carry On.”

Reversing what might be the expected order, the say-goodbye doc, “The Long Road Home,” runs first. We get friendly, emotional, non-spoilery interviews with Episodes 1-327 leads Jared Padalecki (Sam Winchester) and Jensen Ackles (Dean Winchester), plus newer regulars Misha Collins (the angel Castiel) and Alexander Calvert (half-angel/now-God Jack). We also hear from creator Eric Kripke, executive producers Robert Singer and Andrew Dabb, and some longtime cast members, including Jim Beaver (Bobby), Ruth Connell (witch/Queen of Hell Rowena), Kim Rhodes (Sheriff Jody Mills), and Samantha Smith (Mary Winchester). Gratifyingly, we also hear from Mark A. Sheppard (the demon Crowley), who has been absent from the series for the past few seasons. Baby the car isn’t actually interviewed, but is discussed at length.

It’s a little odd that we hear about but not from actors like Mark Pellegrino (Lucifer) and Rob Benedict (Chuck/God), but what the heck. We also get the “Carry On, Wayward Son” recap montage – which is good, since we don’t get the traditional end-of-season montage at the beginning or even the end of the actual final episode. 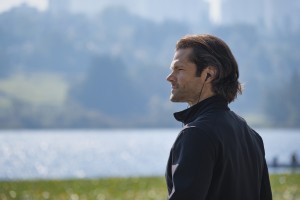 Even more oddly, there’s a scene with Sam and Bobby that’s purported to preview the finale. The sequence is not in that last episode, although it sets up what we’ll get. It will be interesting to know if the scene was shot for the finale, cut, and repurposed, or whether it was shot for the special.

This brings us to the actual SUPERNATURAL series finale, “Carry On.” Sam and Dean wake up on what appears to be a completely normal morning at the bunker. We see that Dean has adopted the adorable dog we met in the previous episode. She/he jumps on the bed to greet Dean, and Dean returns the love. Yay!

We also see there’s no sign of Sam’s girlfriend Eileen. Her disappearance was a source of trauma two episodes back. Though she ought to have returned from wherever when new God Jack snapped His fingers and restored the world’s population, nobody says anything about her. Boo!

Searching on the Internet for a case, Dean finds something – which turns out to be a pie festival in Akron, Ohio. Dean is ecstatic about all the different kinds of pie.

Sam misses Castiel and Jack. Dean says the pain of their loss won’t go away, but the brothers have to live their lives. Otherwise, all the sacrifices were for nothing.

Sam is not all that excited about eating pie, but when he finds a piece topped with whipped cream, he smushes it into Dean’s face. Now Sam is happy, too.

Then a real case materializes in Akron. A team of home invaders, wearing skeleton masks and wielding cutlasses, kill a father and rip out the tongue of a mother, then kidnap the two young children.

The mother is able to do a sketch. Dean and Sam, doing their FBI thing (as Agents Kripke and Singer), get access to the artwork. They realize this is a case like one that their dad worked in 1986. 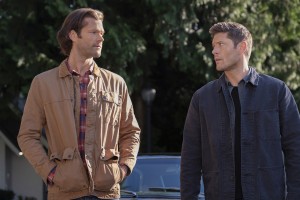 Looking at the sketches (from ’86 and now), Dean deduces, “Evil mimes.”

Well, he’s half-right. The boys figure out where the vamps are likely to strike next and get the drop on two of them. Dean decapitates one, and Sam shoots the other with a bullet soaked in dead man’s blood, debilitating but not killing the vamp. Faced with a choice between a quick death and torture, the vampire reveals that the kidnapped children are alive and at the vamps’ nest.

The nest is in a dark, spooky, abandoned-looking barn, a perfectly respectable lair for a bunch of vampires. Naturally, there’s a big fight, the guys are outnumbered, and they win. The two children are rescued, and sent running out the door.

However, in the fracas, Dean is knocked backwards against a post that has a long piece of metal sticking out of it. He is impaled.

Wait, Dean is going to die in an otherwise ordinary monster takedown? Okay, 1) This is the series finale. 2) Although nobody mentions it, now that Chuck isn’t continually saving Dean and Sam with his writing them out of jams and into permanent good health, Dean is probably lucky he didn’t die of diet- and/or alcohol-related causes. 3) Given where the episode is going, this turns out to sort of not matter.

Dean realizes he is dying. Sam, in tears, says he’ll do something. Dean asks Sam not to bring him back, because that never ends well. (What is he talking about? It’s worked out fine for fifteen seasons now. Oh, never mind …) 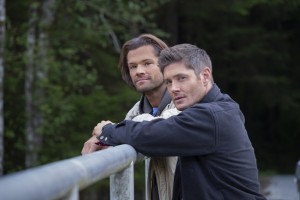 Dean asks Sam to stay with him. Dean says that he’s always looked up to Sam, who was stronger, able to stand up to Dad. Dean also says he waited for hours before going to get Sam from college (in the very first episode), afraid Sam would tell him to get lost. “I love you so much,” Dean tells Sam.

Sam, alone, gives Dean a Hunter’s funeral by burning his (covered) body. In the bunker, Sam sits with the dog. The dog whines. Sam sympathetically says, “I know.” Sam takes a last look at Dean’s room, left as it was when they went out for pie, not knowing he’d never come back.

But then one of Dean’s many phones rings. Sam answers, hesitant. The lawman at the other end asks for “Agent Bon Jovi.” Sam identifies himself as the agent. Seems that Donna Hanscum has suggested the lawman call Agent Bon Jovi, as there’s a case in Austin with bodies that are missing their hearts.

Then Sam, with the dog, leaves the bunker and turns out the lights.

And boom, we’re back at Dean’s cremation.

And then suddenly Dean, healthy again, is outside a cabin, where Bobby – yes, original real Bobby – is happy to see him. Dean asks, “Which memory is this?”

For those wondering what Dean is talking about, the last time Dean got to visit with souls in Heaven, each soul got to live in his or her own favorite memory.

But Bobby says this is no memory. Jack (now God, remember?) has made some changes. Now everybody gets the Heaven they want, need, and/or dream of. Bobby’s old Hunting friend Rufus has a cabin nearby. Dean and Sam’s parents, John and Mary, have their own place a few miles up the road. Dean can have the Heaven he deserves.

Dean is amazed that Jack was able to think of all this. Bobby tells him that Jack had help from Castiel. 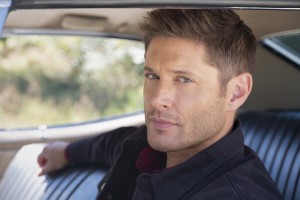 Needle scratch here. This means that Jack got Castiel out of the Empty. Which is great.

A lot of people are upset that Castiel doesn’t actually appear in “Carry On.” From both a narrative and production standpoint, it’s easy to understand why this didn’t happen.

1) The big reunion at the end of this episode has to be Dean and Sam. If the Dean and Castiel reunion was undersold, there would be no point, and if it was big and dramatic, it would cast too long a shadow over the climactic meet-up.

2) As Bobby explains it, there is now all the time in the universe for reunions. Castiel doesn’t need to show up at this exact moment.

3) Given what was said the last time Castiel and Dean got together, they’re going to need more time than the rest of this episode can provide to talk about it.

4) Dean doesn’t see his parents, either, and they’ve been gone longer than Castiel, and under pretty traumatic circumstances, too.

5) While the last seven episodes of SUPERNATURAL aired during COVID, only the last two were actually shot during the pandemic. It may have been logistically difficult to bring Collins in for what would be a quick appearance.

All that said, shouldn’t Dean have some reaction to this news, like, “Oh, Castiel isn’t stuck in Bad Hell after all, that’s wonderful, is he around here somewhere, or is he being invisible, like Jack”? Granted, Dean is sort of in shock, since whatever he was expecting, it doesn’t seem to have been this.

Dean and Bobby share a beer. It tastes like the first one Dean ever had with his dad. That is to say, it tastes like crap, but it’s great. But something is missing …

Bobby assures Dean that time works differently here than it does on Earth, and that Sam should be along presently.

And then, on the gravel outside the cabin, there sits Baby, in mint condition. Dean gets behind the wheel, and as “Carry On, Wayward Son” comes on the car radio, he drives off through the roads of Heaven, which look an awful lot like they wind through the mountains of Vancouver.

As “Carry On, Wayward Son” finally plays in an unabridged version, we get a short montage of Sam’s subsequent life.

We see Sam playing with a little boy wearing a t-shirt that proclaims the child’s name to be “Dean,” while a dark-haired woman watches in the background. We can surmise this is Eileen, but we’re a bit too far away to be sure.

Later, we see Sam and his now-older son, who sports a Hunter’s tattoo, going over some lore. They appear to have a moment of speaking in sign language, which again leans towards the notion that Sam got together with Eileen.

A much-older Sam goes into the garage and sits behind the wheel of the Impala.

Finally, a very old Sam, with gray hair, is lying in a home hospice bed. His son is with him, and takes his hand. Son Dean tells Sam, just as Sam told his brother Dean, “It’s okay.” And Sam dies.

Dean parks Baby on a bridge and gets out. Fortunately, there’s no other traffic – it’s Heaven, after all, where no one will ever ram your vehicle – and as Dean stands on the bridge, without looking round, he says, “Hi, Sammy.”

And there Sam stands, back to the way he looked before he aged in the montage. The Winchester brothers hug, then gaze out at the Heavenly view of the mountains and the woods and the river.

And then Padalecki and Ackles appear as themselves, one last time, to reiterate how much they love the show, and their characters, and each other, and the viewers.

Finally, there’s a shot of Ackles and Padalecki and the whole crew on the bridge together, as director Robert Singer calls “Cut” for the last time.

Personally, I wish we’d seen the dog, but maybe he or she went back to her or his original owners. Also, what’s with neither confirming nor denying Sam married Eileen?

As to the ending itself, though, it’s about as thoroughly set up as an ending can be. The afterlife isn’t some tacked-on sop in SUPERNATURAL. Heaven and Hell have both been visited more times than, say, Akron, Ohio. If Dean can die in Akron, he can move on to Heaven. And no reason Jack wouldn’t fix Heaven, except for the whole hands-off speech He gave last week. Apparently, that only referred to Earth.

In the end, SUPERNATURAL delivered on its basics: absolute brotherly love, monsters, and a sense of hope. Kudos to the creators for not succumbing to the impulse to gauge their impact by how miserable they could make the characters and/or the audience. Having the show stop is loss enough. “Carry On” feels both right and well-earned.

And, should those involved ever wish to do so, it leaves the door open to carry on indeed. Either way, it’s been a ride that’s been sometimes bumpy and grumpy, occasionally hilarious, often moving, and overall glorious. Thanks, guys.