An okay episode that resolves the Dark Kaia storyline 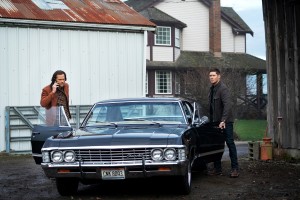 SUPERNATURAL has moved to Monday nights for the last nine episodes of its fifteen-year run. That run may be stretched out a little more than originally planned, since production on the series finale (like so many other things) was shut down due to concerns about the spread of Covid-19.

Meanwhile, SUPERNATURAL is back from its month-and-a-half break with the episode “Galaxy Brain.” We begin four weeks ago on Earth 2, one of Chuck/God’s (Rob Benedict) other creations. The radio news tells us that Hillary Clinton is the U.S. President there, and the world is coming together to solve climate change.

Chuck walks into an Earth 2 Radio Shed store. He doesn’t want to buy tech, He just wants an audience. The poor, bewildered clerk (Nicco Del Rio) listens to Chuck going on about how He made a bunch of worlds, and a bunch of other Sams (Jared Padalecki) and Deans (Jensen Ackles). Our world’s Dean has told Chuck that He’s never going to get the ending He wants. And Chuck says it shouldn’t bother Him – He’s gotten the ending He wants from hundreds of other Sams and Deans on other worlds, and He can get hundreds more, but He doesn’t care. The real Sam and Dean spark joy and challenge Him, disappoint Him, surprise Him. They’re the ones. Chuck decides He needs less of everything – no more other worlds, subplots, spinoffs. Uh-oh for Radio Shed.

On our world, now, Jody Mills (Kim Rhodes) is checking out a dead cow. On the phone with adopted daughter Alex, Jody says she thinks this was a case of regular human on animal cruelty. Then Jody sees a strange red light, goes into a barn to investigate, and is knocked unconscious by an unknown figure. 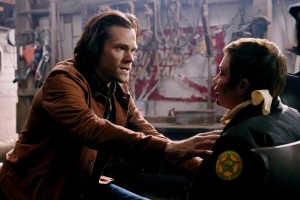 At the bunker, Sam is sharing his worries about Jack (Alexander Calvert) with Dean and Castiel (Misha Collins). Billie/Death (Lisa Berry) has brought Jack out of the Empty, but she won’t disclose her plans for him, except that she’s trying to help him get to a place where he can kill God. She’s got Jack eating the hearts of evil angels and he still doesn’t have a soul.

Jack is looking over the table where Sam and Dean carved their initials. Mary Winchester carved her initials, too. Jack accidentally killed her last season, and seems to be feeling major guilt about it (he’s also still understandably concerned about how Dean and Sam feel about this, even though they seem to have forgiven him). Jack is startled by the appearance of a strange woman, Merle (Sandra Ferens), who tells Jack he made a silent prayer to Death, but Death is busy, so Reaper Merle is here instead. She tells Jack to stick with the plan, lie low, and not to use his powers, or else God may find him.

Castiel, meanwhile, has his own fears for Jack, but Jack trusts Billie, and Billie trusts Jack. Sam is freaked out about what happens to the balance of the universe if Jack kills God. Dean is inclined to trust Billie, who is definitely a stickler for rules. Sam reminds everybody about Billie’s mistake with the Malek box (oops). But her plan is all they’ve got.

Sam hears Jack talking to someone and opens the door to Jack’s room. Merle is gone and Jack says he wasn’t talking to anybody. Sam says they’re all glad to have him back, and that they would have helped him if he’d come to them. Jack says he knows.

Castiel is drinking with Dean. Castiel says that when Jack’s mom Kelly was pregnant with him, she had faith Jack would be good for the world. Castiel had that faith, too, and when God took Jack away, Castiel felt lost, but he knew Jack wasn’t done. And he was right. Castiel wants Jack to fulfill his own destiny. Dean wants revenge on Chuck.

Then Jody calls. She says she’s in trouble, and if Dean doesn’t come, she’s dead. Dean and Sam show up at the barn to find Jody tied to a chair. It’s Dark Kaia (Yadira Guevara-Prip), from the alternate universe (but not Earth 2) where almost everybody got stuck at some point, who’s here for the magical spear she loaned to Dean. Unfortunately, the archangel Michael broke the spear back in Season 14, so Dean doesn’t have it to return to her. Kaia needs to get back to her world, because it’s dying. Furthermore, our world’s Kaia is actually alive in Dark Kaia’s world. Dark Kaia can see that world through regular Kaia’s eyes. 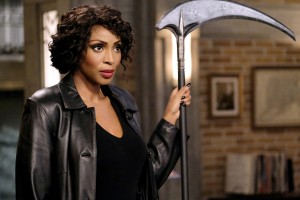 Jody is appalled. Kaia was one of her “adopted” children, and Jody and the boys just left her for dead.

By now, if you feel totally confused, you won’t be alone. “Galaxy Brain” seems designed to confound anybody who isn’t very conversant with the past few seasons of SUPERNATURAL. (Your humble reviewer had to consult several previous recaps to double-check details.)

Anyway, Cass and Jack are playing an old-fashioned box game (Jack wins) when Sam and Dean return with Dark Kaia and Jody. This is the first time Castiel and Jody have actually met in person. (This reviewer hadn’t realized this. Anybody else? Show of hands?) Dark Kaia wants Jack to return her to her world. Castiel refuses to hear of it, and nobody else really wants Jack to disobey Billie’s rules and use his powers either. So everybody starts hitting the books to see if there’s a spell that will work. What they really need is archangel grace. This world’s Michael is walking around, but nobody knows where.

Castiel reaches out to his slippery magic dealer Sergei, but Sergei’s not answering. Castiel asks if Jody has told adopted daughter Claire about recent developments. Claire and original Kaia were in love. Claire has spent years seeking revenge on Dark Kaia for (we all thought) accidentally killing original Kaia. Telling her that Kaia is alive would just torture her if they can’t get her back, so Jody is keeping Claire out of the loop.

Jack goes to see Dark Kaia. Why did Dark Kaia come here? Dark Kaia says she thought our world looked peaceful, but it’s cold and incomprehensible. She finds empty spaces and hides. She begs Jack to help her and original Kaia.

Jack uses his power to see through Dark Kaia’s eyes. He announces he’s going to help both Kaias by opening a rift. Dean, Sam, Castiel, and Jody are all appalled. Not as appalled as Merle, though, who appears and says what Jack is planning to do is not just dumb, but “Winchester dumb.” She threatens to tell Billie what Jack is doing. Jack tells her to go ahead. Merle threatens to stop Jack herself. Jack points out that if Merle harms Jack, Billie will be very unhappy with her. Then again, if Merle helps them find the safest way of doing it, Billie never has to know.

Merle observes that after Amara stripped the cosmic warding off the bunker, the guys have done a not-so-great repair job that now only keeps out demons and monsters, not everything else (like Chuck, for instance). There’s no way to do a full, permanent repair. Merle can temporarily repair it – she’ll need Castiel – and maybe that will keep them off of Chuck’s radar while Jack is using his power.

Glyphs light up, wards seem to be working. Sam is happy they’re doing the dumb right thing again. Castiel asks Jody to stay behind. Claire is the daughter of Jimmy Novak, the man whose body Castiel possesses. (Jimmy died, so he can’t go back into it.) Again, if you don’t already know this, all Castiel says is that he can’t replace what he took from Claire, but now she has Jody, and he doesn’t want Claire to lose Jody as well. Jody realizes this would kill Claire, so she agrees to remain in our world.

Our-world Kaia hears the boys calling for her, comes out of the cave, and hugs Dean. Dark Kaia says she’s staying, despite the apparent apocalypse. This is her home, and she never should have left. After the boys go through the rift with our-world Kaia, it seems that the storm is destroying Dark Kaia’s world as she braces for this.

Jody is waiting by the rift when the boys come through with Kaia. Jody and Kaia hug. Later, Kaia wears some of Jack’s clothing. Jack asks Kaia how she survived. She said she remembered a nursery rhyme, but doesn’t recite it. Jody takes Kaia back to Sioux Falls with her.

Merle says they just still be off Chuck’s radar, or they’d all be dead. An instant later, Merle is killed – by Billie/Death, who is royally annoyed.

Billie killed Merle for not keeping Jack in line. Billie says that all the worlds are dying except this one – he’s extinguishing galaxies until the end.

Sam wants to know what Billie’s plan is. She has Death’s knowledge and Death’s library. Everyone has a book, even God. The books write themselves. God had to build Himself into the framework of the world so it could keep ticking in His absence. Even Chuck cannot read His own book unless Death lets him. Jack is in God’s book. Sam and Dean are in God’s book, too. They are the messengers of God’s destruction.

God is watching the destruction of various worlds on the flat screens in the Radio Shed. He’s been there for weeks, eating takeout and forcing the unfortunate clerk to serve Him. The clerk begs for reassurance that he, and his world, will be okay. Chuck assures the clerk that he’ll be fine. Then Chuck exits the building and causes a flaming meteor to fall from the sky.

So what have we learned from all this activity in “Galaxy Brain”? Actually, not a whole lot, except that we see why Billie is staying her hand with Sam and Dean, and why she rescued Jack. We are getting royally annoyed with Chuck ourselves, as He goes around destroying perfectly good worlds with billions of perfectly good people and animals and plants on them.

It’s nice that our-world Kaia can come back and reunite with Claire, even though she did seem pretty dead when we left her. We also get the feeling that someone in the writers’ room realized that Dark Kaia, clearly intended to be a Big Bad for the spinoff that didn’t happen, couldn’t just be left roaming around forever, and this was felt to be the best solution.

There’s some mid-level angst, and it’s good to see that everybody seems to be done with blaming Jack and Castiel (we’ve got bigger problems that require more than sulking to solve them, thank you very much).

“Galaxy Brain” is a decent episode that moves things along a bit, but not by much, and doesn’t have a lot of high points. Then again, it has no low points, either, so it all evens out in the end.