Quite a dilemma we’ve got here 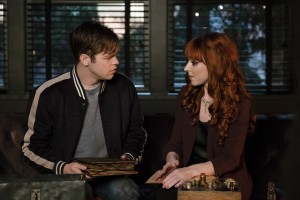 Sam (Jared Padelecki) and Dean (Jensen Ackles) return to the bunker, happy that Lucifer was preventing from reentering the world and that Sam didn’t die. They know that Jack (Alexander Calvert) saved Sam, but they don’t know – yet – that Jack was the one who really pulled the plug on the Devil.  Then they start to worry when their mom Mary (Samantha Smith) and Jack aren’t there. They worry more when they find Mary has left her phone at the bunker, and Jack won’t answer his phone. Sam tracks Jack’s phone, and finds that Jack is literally going all over the world – Nepal, Peru, France. Finally, he seems to settle at the remote cabin they’ve been using.

Castiel (Misha Collins) calls. When he hears that Jack and Mary were alone together, he’s extremely concerned. He tells Sam and Dean about Jack killing Felix the snake when the snake seemed to be ailing.

At the cabin, Jack’s subconscious appears to him in the form of Nick/Lucifer (Mark Pellegrino). The subconscious tells Jack what he already knows: he’s completely screwed. Jack killed Mary Winchester. There’s no coming back from this.

Sam loses Jack’s phone signal, but he and Dean track the phone’s last known location to the cabin. In the car, Sam tries to rationalize Jack’s killing of the snake. Felix was sick; maybe Jack thought it was a mercy killing. Dean can’t believe Sam and Castiel are talking about a snake. Boo on you, Dean.

Jack isn’t at the cabin, but Nick’s scorched corpse is. So is a giant blast area. Even Dean, who has been trying to find alternative explanations for what could have happened, is starting to suspect what really occurred.

Castiel arrives and says that when Jack killed Felix the snake, it wasn’t an act of evil, but Castiel felt the absence of good. Castiel blames himself for not telling Sam and Dean sooner, and for not trying to talk to Jack at the time. Dean agrees, deciding to blame the whole thing on Castiel. If Jack has hurt Mary, Dean tells Castiel, “You’re dead to me.” Sam tries to reason with his brother. They call witch Rowena (Ruth Connell) and have her try to find Jack and Mary. Jack is cloaked, and while Rowena can’t determine what happened, she says that Mary Winchester is not on this Earth.

Sam, Jack and Castiel all experience their own separate good memories of Mary. Sam tries to remind Dean that they all sort of made bad calls with Jack. Sam blames himself for dumping Jack on Castiel so much and not being more involved. Dean blames himself for not paying closer attention to what Donatello was trying to tell him.

At this point, Dean decides that if Mary is dead, they’ll just have Rowena resurrect her. Fair enough – almost everybody else Dean and Sam know (including each other) has been resurrected multiple times. Dean orders Castiel to see if Mary’s in Heaven.

Jack goes to see Rowena, and starts micromanaging her. Rowena tells Jack that she knows he wants to help. Rowena hears Jack talking to his subconscious/Lucifer, but sees him talking to nobody, which makes her understandably nervous. Subconscious Nick tells Jack that Jack doesn’t feel anything anymore.

In Heaven, Castiel tries to get big boss Naomi, gets angel Duma (Erica Cerra) instead. Duma says that Mary is indeed in Heaven, at peace and complete.

Avoiding the arrival of Sam and Dean, Jack zaps himself and Rowena to the cabin where Mary died. Rowena says they’ll need a body in order to resurrect her. Rowena then tells Jack frankly that, while they may be able to bring something back, it won’t be Mary Winchester. Annoyed, Jack sends Rowena back to her home.

Rowena calls Sam and Dean to warn them about Jack’s state. Jack tries by himself to bring Mary back. He does manage to recreate her body, but there is no life in it. Sam and Dean arrive at the cabin. Jack says sadly, “It didn’t work,” and disappears.

Subconscious/Lucifer tells Jack that Sam and Dean will never trust him again, which means he can’t trust them.

Castiel shows up to affirm that he’s seen Mary in her personal Heaven, reunited with John. There’s no sorrow, no guilt, it’s all joy. At this point, even if they could get her back, it wouldn’t be right.

The Winchesters and Castiel burn the body that Jack created for Mary, along with some photos of her. There’s a memory montage reminiscent of what we’d see in HIGHLANDER: THE SERIES when a beloved character died. Jack is nowhere to be seen, and Sam wisely stops Castiel from trying to approach Dean.

“Absence” overflows with emotion: love, loss, blame, guilt, not to mention the Shakespearean weight of a death of one loved one caused by another. Will Jack really break bad? Even if Jack can be redeemed and/or resouled, can Dean ever forgive him? Where does this leave life, the universe, and everything? It’s an intriguing road to find the answers.