The return of John Winchester in Episode 300 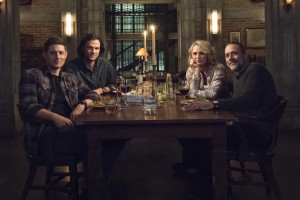 When there’s a series that’s gone on as long as SUPERNATURAL, and there’s a character that looms as large in its mythology as patriarch John Winchester, as embodied by Jeffrey Dean Morgan, it seems inevitable that he must reappear at some point. To be clear, the character John Winchester has showed up several times since his demise in the beginning of Season 2. But that was a younger version of the character, played in five episodes by Matt Cohen and once by Nels Guloien.

SUPERNATURAL celebrates its (holy heck) three-hundredth episode, Season 14’s “Lebanon,” by giving us the real deal, the loved, feared and resented figure Sam (Jared Padalecki) and Dean (Jensen Ackles) grew up with and without. This is courtesy of a pawn shop item.

Sam and Dean go into said pawn shop, which seems to be related to the establishment in FRIDAY THE 13TH: THE SERIES, where lots of magical/cursed items are in the back of the store. They pretend to be customers, but they’re really there for the proprietor, who killed a friend of theirs and stole his merch. When the proprietor tries to kill Sam, Dean shoots and kills the man. 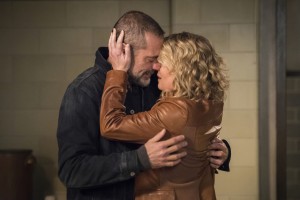 Sam and Dean then take all of the magical items and stuff them into the Impala. One of the items is a Chinese pearl that supposedly grants the heart’s desire. Sam thinks that they can desire for Michael to go away. But, oops, some neighborhood teens take Baby for a joy ride, telling each other tall tales of the weird monster-killing “Campbell” brothers (as the Winchesters call themselves close to home).

Once Dean gets over his fury enough to see straight (nothing makes him as mad as somebody putting hands on Baby), he and Sam ask some questions and obtain the address of the abandoned house where the kids like to hang out.

The kids have taken all sorts of magical items out of the Impala. John Wayne Gacy’s cigar box opens by itself, disgorging a clown ghost. As Sam and Dean enter, they are confronted by a terrified teen, who has just been attacked by said ghost. Dean and Sam spring into normal Thursday action, and do some ghost-busting. The kids see the ghost burn, so Sam and Dean give them the “monsters are real but don’t tell anyone” speech. (Let’s see how well the kids do with keeping that secret.)

Back at the bunker, Sam takes out the pearl and Dean wishes on it. Except it turns out that Dean’s heart’s desire is not to survive having Michael trapped in his head. Instead, what Dean really wanted is to have his and Sam’s dad, John Winchester, back with them.

And, lo, the lights flicker, and then there is John Winchester alive and well. He’s a little confused – he at first thinks it’s 2003, when Sam was still away at college. Sam and Dean tell John highlights of what’s happened since he’s been gone – God, Lucifer, a few apocalypses, Sam becoming a great Hunter, Castiel befriending them, raising Jack. John takes the information quite well, all things considered. 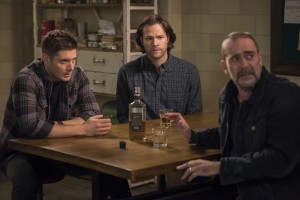 Then Mary (Samantha Smith) enters, John’s wife and Sam and Dean’s mom. From John’s point of view, Mary was killed decades ago, setting him on his Hunter’s journey. From Mary’s point of view, John died years before she was brought back. Mary is momentarily stunned to see John. Then she gets over her shock. They embrace and kiss.

Sam and Dean give their folks some privacy. Dean is reacting exactly how you’d expect someone to react when their heart’s desire is fulfilled. Sam is a little more circumspect. Time travel has consequences.

Okay, time out, because this affects the rest of the episode. Time travel? Why isn’t John just back, like Mary’s back? Because then there would be no good reason for him not to stay, and Morgan’s services are currently still required full-time over THE WALKING DEAD. But that’s a production reason, not a story reason. The story reason is arguably that Mary was brought back by the god figure Amara, while John’s return is wish-based. Well, okay. But still, phooey.

In any case, Dean just wants to have a family dinner with everybody there for once. Given the circumstances, this doesn’t seem too unreasonable. So Mary and Dean get together to make a shopping list for the newest round of Winchester Surprise. This leaves John and Sam alone in the library.

John is aware that he screwed up rather badly with his younger son, and apologizes to Sam. Sam says that he doesn’t think about what John did or didn’t do, just that Sam didn’t get a chance to say goodbye when John died. But John wants to talk about it, and says, “I’m sorry.” Yes, since in a way the whole of SUPERNATURAL has been begging for this moment, it has impact: on Sam, on John, on us, probably on the show’s trajectory.

Dean and Sam go grocery shopping, and find that, indeed, the timeline has changed. Nobody in town knows them anymore. Dean’s picture is on a wanted poster (in this timeline, he’s still wanted by the FBI for murder), and a video on the Internet shows Sam is now a successful, bespectacled lawyer, giving a talk on the importance of healthy living and avoiding interpersonal ties.

As if this isn’t bad enough, this timeline’s Castiel is still a by-the-book operative of Heaven, working with none other than the petty archangel Zachariah (Kurt Fuller), whom the brothers killed back in Season 5. Zachariah and Castiel are know somebody tampered with the timeline and are searching for the guilty parties. 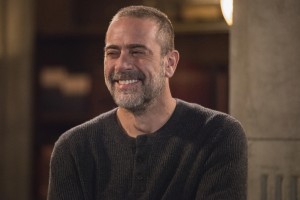 Sam and Dean see an angelic glow coming from a restaurant where Castiel and Zachariah are questioning the patrons. Castiel has his wings out – and doesn’t know the Winchesters at all. Zachariah is surprised to see them. Heaven had big plans for the brothers, but these didn’t work out once John disappeared in 2003.

Back at the bunker, Dean and Sam explain the problems with the time paradox to their parents. In addition to all the other issues, in this timeline, Amara never resurrected Mary, so Mary will evaporate. John agrees that he has to go back to his own timeline, with his memory wiped (remembering all this could change the timeline). But first, they have a Winchester family dinner.

After everybody decides to enjoy themselves this once, the dinner is a genuinely happy occasion, with all of the Winchesters (shown in montage) eating, drinking and laughing. John is proud of his sons. As Sam and Dean wash dishes after the meal, giving John and Mary some more alone time, Sam wishes Dad didn’t have to go back. Dean has a new perspective on things, though. After all these years of blaming their parents for things, he’s now glad with how he and Sam turned out.

Everyone hugs one last time. John tells Mary he loves her, then tells his sons he loves them. Dean tells his father, “I love you, too.” Then Sam crushes the pearl, and John Winchester vanishes from 2019. Castiel, obviously the one we know, enters and wants to know what’s been going on.

Back in 2003, John wakes up in the Impala. On the phone with Dean, John tells his son that he’s had quite a dream.

On most shows, especially ones with big arcs, episodes where everything goes back to normal at the end feel like cheats. “Lebanon” is a rarity in that it resolves issues of the series that go back to the first episode without cheapening anything that will come next. This would be a remarkable accomplishment, even without the segment’s well-earned emotional impact.