So many characters! So much plot! So little season left! 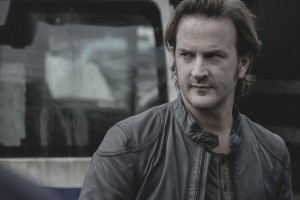 This is a little confusing, so follow closely, please. We are in the alternate universe, but with our original versions of the characters, unless otherwise stated. Lucifer (Mark Pellegrino) has just resurrected Sam (Jared Padalecki) after a vampire attack. Lucifer then returns Sam to his family, who believed him to be dead (albeit briefly, since the vampire attack just happened). Everybody is overjoyed to see Sam. They are less thrilled to see Lucifer, despite the nice present (Sam) he’s brought them and his protestations that he’s ready to join the team and help take down Alt-U archangel Michael (Christian Keyes). Lucifer is delighted to finally see his son Jack (Alexander Calvert), who doesn’t know how to feel about not-so-good ol’ Dad. Dean (Jensen Ackles) and Castiel (Misha Collins) insist to Lucifer that it’s not even up to Jack whether the half-angel, half-human being interacts with his father. Dean then commands an ambivalent Gabriel (Richard Speight Jr.) to kill Lucifer with the angel blade. This is all too much for Jack, who yells at everybody to stop it, and then disappears. So we’ve got the episode’s first search, and it’s clear who’s donned the mantle of sulking for this go-round.

Lucifer says that, back on our Earth, he’s left the witch Rowena (Ruth Cornell) enough grace to keep the rift between worlds open for another thirty-seven hours. He submits to being handcuffed, and is even good-natured about being punched in the face by Mary (Samantha Smith) when she sees him. 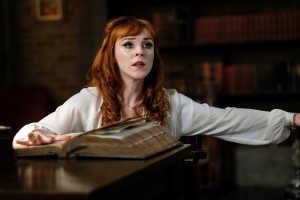 There is the sort of scene we reasonably expect with Sam and Dean, with Sam apologizing for bringing Lucifer along, Dean telling Sam that he has nothing to apologize for. Dean says he thought he lost Sam. Then the brothers hug. Go Team Winchester. Sam says he’ll deal with Lucifer.

Jack, by himself, remembers advice he got from his late mom (Courtney Ford) via video message and from Sam in person, about trusting his instincts. So Jack shows up just as Castiel is arguing with Lucifer. Jack admonishes Lucifer to call him by his name and not “son,” but says he wants to listen. Lucifer is happy about this, Castiel much less so.

Sam and Dean go to get Mary, but Mary says she can’t abandon the people she’s been fighting for/with. She’s staying. Dean tries to talk her out of it, but Sam realizes Mary has made her mind up. She doesn’t want to leave her people – so why not bring them all back to regular Earth?

The Alt-U Bobby Singer (Jim Beaver), for one, thinks this is a terrible idea. Dean wants to know the whereabouts of Alt-U Charlie (Felicia Day) and our-world Ketch (David Haydn-Jones) – Bobby says they’re off on a mission. Dean is also freaking out about Lucifer talking to Jack, but Mary assures him that Jack is able to make up his own mind about his father.

Lucifer is giving his version of events to Jack. Gabriel, one of Jack’s uncles (all those archangels are brothers), finally can’t take it anymore and tells Lucifer to stop blaming their father (God) and painting himself as a victim. Lucifer does show his usefulness by blowing up a squad of bad guys, and then melting his shackles, which don’t work in Alt-U anyway.

Charlie and Ketch’s mission goes sideways, and they wind up in the clutches of the evil angels of the Alt-U. The angels bring in their ace interrogator: Alt-U Castiel, played by Collins with a really peculiar accent. (Eastern European? Moosylvanian?)

Mary’s people decide to vote on whether or not to visit our Earth, where they can borrow some Winchester weapons, come up with an actual plan and then return home, versus staying in Alt-U and getting slaughtered. Sam endorses the former.

Our guys hear that Charlie and Ketch have been captured. Regular Castiel mind-tortures info out of a baddie, then goes with Sam and Dean to do some rescuing.

Left behind to guard against more angel attacks, Gabriel and Lucifer argue. Gabriel doesn’t think Lucifer will ultimately win over Jack. After all, Lucifer has never felt empathy, or love. Gabriel reminds Lucifer that Dad locked up Lucifer because humans were good and innocent, but Lucifer kept tempting and corrupting them because he was mad that Dad loved them more. Lucifer is not happy

Sam and Dean rescue Charlie and Ketch. Castiel and Alt-U Castiel confront each other. Alt-U Castiel makes a standard villain speech about, “Don’t think you’re better than me, we’re the same.” Our-U Castiel says, “I know” and kills Alt-U Castiel with an angelic blade.

Time out. Aren’t they all desperate for angelic grace? Isn’t Alt-U Castiel full of angelic grace? Shouldn’t/couldn’t Our-U Castiel have grabbed some if he had to kill his doppelganger anyway?

The humans, even Alt-U Bobby, vote to go through the rift. Lucifer uses his powers to zap an old bus into action to take them there, but Jack suddenly becomes determined to kill Michael. Sam tries to talk Jack out of this course of action. Then Lucifer steps in and reasonably explains to Jack that if Jack goes after Michael, chances are, everybody will have to go rescue Jack, and the humans will not get through the rift and probably will die. Jack realizes his father is making a valid point. Lucifer is exuberant that Jack referred to him as “my father” and took his point. Sam is just about dumbstruck.

Everybody piles into the vehicles. They head for the rift between worlds. Back on our world, poor Rowena apparently has been awake, chanting, for three days straight trying to keep the rift open. Sam and Dean start pushing people through: Mom, Castiel, Charlie, Jack, Ketch, Bobby, Mary’s followers. Lucifer wants to go through with Jack, but is told he and Gabriel need to stay behind in case there’s trouble.

Which there is. When they’re down to the last few people, Michael launches a bomb into the clearing, which kills everyone remaining except Sam, Dean, Lucifer and Gabriel. Then Michael arrives. Lucifer tries to fight him; Michael wounds him. Even though Sam and Dean tell Gabriel to go, Gabriel decides it’s time to stop running and fight. Michael and Gabriel have a knife fight with angel blades. Gabriel is mortally wounded. Well, crap. Gabriel is a fun character, Speight does a terrific job playing him, and he’ll be missed.

At the bunker, everybody is celebrating. Everybody, that is, except Jack, who is worried about Lucifer. Bobby makes a speech, welcoming Sam and Dean to the resistance family. Sam and Dean tell Castiel that Gabriel sacrificed himself for them, and that Sam handled Lucifer.

Well, Sam handled Lucifer pretty badly. Once again, Winchester bad judgment rules the day. Lucifer is a deal-maker – what did Sam seriously think was going to happen? Lucifer explains to Michael how to make a rift. They’ll both go through, Lucifer will get his son, and Michael will get everything else. Lucifer looks sad, maybe about Gabriel, maybe about losing his position as the Big Bad to Michael, maybe about getting kicked off the team when he really was trying to be helpful, even if his heart wasn’t in it.

We understand, of course, that our guys can’t just sit around being happy and relaxed for any amount of time. Even so, did the upcoming catastrophe have to be due to Sam assuming that rift-opener Lucifer would just passively accept his fate, and that ambitious Michael wouldn’t figure out how to turn things to his advantage? Still, “Exodus” is an episode with plenty of events and lots of welcome old friends turning up.