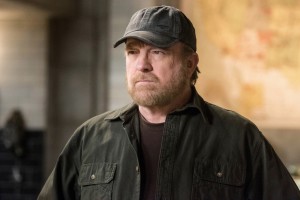 For the Season 13 finale of SUPERNATURAL, entitled “Let the Good Times Roll,” the show reaches all the way back to Season 5 for a plot twist. We also get to see Dean (Jensen Ackles) uncharacteristically relaxed for a little while, and Lucifer (Mark Pellegrino) having every emotion known to humankind, even if he isn’t human himself. There are some great character moments here, and all of the actors bring their A game.

Sam (Jared Padalecki) and Dean fill in the newly-arrived refugee resistance fighters from the alternate universe on the conditions of our world. They mention the melting ice caps, the current U.S. president – and the fact that THE SHAPE OF WATER won the Best Picture Oscar. Wait, SUPERNATURAL is lumping the work of Guillermo Del Toro in with those other disasters? Raise your hand if you object. This recap does at least give actor Jim Beaver, through the vehicle of his character, alt-u Bobby Singer, to express his thoughts about the 45th president of the United States, albeit in milder terms than Beaver has occasionally used on Twitter.

Then Dean, Sam, Castiel (Misha Collins), and Jack (Alexander Calvert) take out a den of werewolves. With Jack’s super-Nephilim powers, it’s very easy. Back at the bunker, Dean confesses to Sam that with Jack on their side, he can imagine a world that’s finally safe from the supernatural – in which case, the brothers and Castiel can go chill on a beach. Yeah, right, but they’re happy for the moment.

The boys’ mom Mary (Samantha Smith) is out for a walk with Bobby. Bobby likes our verdant, sunny world, and isn’t too upset about the prospect of not being able to go home. Bobby recaps for Mary (and us) where some other characters are. “Ketch is off doing Ketch things.” And Rowena and alt-u Charlie are on a road trip together. Fanfic writers, to your keyboards! Bobby seems to have a little crush on Mary.

Then Mary and Bobby come across the dead body of Maggie (Katherine Evans), the young refugee our guys saved from alt-u vamps two episodes back. She has apparently died of a head wound after losing a lot of blood.

Dean hears Jack crying out in his sleep and wakes him. Jack is having nightmares about the people he couldn’t save. Dean empathizes and gives Jack a pep talk. Whatever Jack is going through, Dean, and Sam, and Cas will all be there for him. Jack is family, and family is always there for each other. Then Mary calls about Maggie’s death.

Sam and Dean question one of Maggie’s friends. She seems even more upset that there’s murder in this world (“We were supposed to be safe here!”) than about Maggie’s death. She does reveal that Maggie had a crush on a convenience store clerk.

Jack, guilt-stricken about not having saved Maggie, he zaps himself to the convenience store and almost kills the poor clerk before Dean, Sam and Castiel show up. When they manage to convince Jack of the astonished clerk’s innocence, Jack zaps himself to the woods, where he literally begins hitting himself because he’s so distraught that he keeps hurting people. Then Lucifer shows up and offers the comforting words, “Hi, son.” 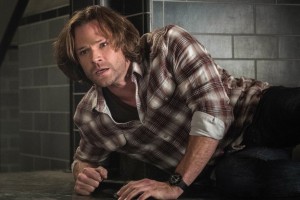 In the previous episode, Sam lied to Jack and told him that alt-u archangel Michael (Christian Keyes) had killed Lucifer. Lucifer understandably rats Sam out on this one, but says he understands – Lucifer has done so many awful things to Sam over the years that he had it coming. When Jack turns to his father for answers, Lucifer says that the two of them are not human. Angels and humans just don’t mix well. Lucifer suggests that they explore the universe together – other worlds, other galaxies – as father and son. Jack thinks this adventure sounds great. He just wants Lucifer’s help with one thing.

Actually, Jack might want Lucifer’s help with two things if he knew what else was happening. The archangel Michael shows up at the convenience store, scaring the heck out of Sam, Dean and Cas. Dean throws a firebomb at Michael, which allows them to escape temporarily.

Jack takes Lucifer to the bunker. Mary is appalled and tells Bobby to call her sons. Lucifer is nonplused when he finds out what Jack wants him to do, which is raise Maggie from the dead. Lucifer tries to warn Jack that people can come back “different.” Jack counters that Lucifer resurrected Sam, and Sam is fine. Lucifer tries to explain that Sam is already kind of different. When Jack holds firm, Lucifer caves and brings Maggie back. Sam, Dean and Cas arrive, but Jack and Lucifer have disappeared.

Sam asks Maggie what she remembers about her attacker. She says she didn’t see a face, only the eyes.

Then the lights start going off, the ground trembles and everybody realizes Michael has arrived. Sam and Dean beg Mary to go with Bobby and Maggie. She objects, but finally goes. This leaves Sam, Dean and Castiel to face Michael, who breaks the door down. Our guys give it their best shot, which isn’t much in the face of Michael’s might. Michael explains about the deal he made with Lucifer, and says he’s going to make a world without sin. When Dean points out that this didn’t work last time, Michael concedes he made some mistakes on his home world, but he’ll do better this time. He’s going to save Dean’s soul by killing him. While Michael is slowly choking the life out of Dean, Sam is on the floor, praying to Jack.

While Lucifer and Jack are looking up at the night sky, Jack hears Sam’s prayer and returns to the bunker. Lucifer follows. Jack is already furious with Michael for personal injuries – seeing Michael trying to kill Dean pushes Jack over the edge. He sends a wave of power at Michael, knocking the archangel to the wall and making his eyes and ears bleed. Lucifer is impressed with his son’s power. Michael demands help from Lucifer, reminding him of their deal. Lucifer realizes this is about to get dicey and tries to get Jack to leave. Jack, however, wants to know about the deal. He’s quickly filled in: Lucifer would get Jack and Michael would get to destroy the world and everybody in it, including all those whom Jack loves. Jack asks if this was why Lucifer wanted them to go off-world. Sam then says that Lucifer murdered Maggie. When Lucifer tries to deny it, Jack uses his power to force his father to confess. Maggie saw Lucifer scoping out the bunker and started screaming; Lucifer used his bare hands to crush her skull and enjoyed it.

Jack is in tears and says that Lucifer isn’t his father, Lucifer is a monster. Lucifer roars and says that Maggie didn’t matter, she’s human. Jack says that he’s human, too. Lucifer seems genuinely sad, but says if he can’t have Jack with him, then he’ll just take Jack’s power. Lucifer stabs a hole in Jack’s throat and sucks out some grace. Then Jack’s throat heals, Michael eyes heal, there’s a great glowing blast and when it’s gone, so are Jack, Lucifer – and Sam. Yikes.

Lucifer has taken Jack and Sam to a church. He offers them a choice. One can kill the other, or Lucifer will kill them both, end the world, and remake the universe to his own liking.

Back at the bunker, Michael says Lucifer will kill Sam. Dean asks if Michael can defeat Lucifer – he did it before, back in the alt-world. Michael says this is when he was stronger and Lucifer was weaker. Michael’s human body is badly damaged. Lucifer will probably end the universe now.

And now, flash back with us, and Dean, to Season 5, when absolutely nobody in the SUPERNATURAL world or our own imagined it would be relevant to the finale of Season 13. The archangel Gabriel (Richard Speight Jr.) told Sam and Dean that they were the perfect vessels for, respectively, Lucifer and our universe’s Michael. Sam let Lucifer enter him so that Lucifer could be trapped in the cage in Hell; Dean absolutely refused to invite Michael in, so Michael wound up going into Sam and Dean’s half-brother Adam and also went into the cage (so far as we know, Michael and Adam have both had nervous breakdowns and are still in the cage).

Dean remembers all this and offers himself to Michael as the perfect vessel so that Michael can fight Lucifer. Dean insists that he’ll still be in charge. Castiel warns Dean against this, but Michael of course accepts.

So at the church, Sam asks Jack to kill him. Jack instead tries to kill himself so that Sam can live and maybe stop Lucifer. Before Jack actually kills himself, there is a blast of light and Dean/Michael arrives to smite Lucifer. Dean/Michael and Lucifer clash and battle midair (like vampires in other shows). Lucifer is more powerful and gets the upper hand, but just as he’s killing Dean/Michael, Sam tosses Dean an angel blade and Dean stabs Lucifer with it. Lucifer’s power blasts out of him with such force that his face catches fire. He dies.

Sam and Dean are ecstatic. Jack is a little sad (Lucifer was his father, after all), but he’s glad his family is alive and safe. “You did it!” says Sam. “No,” Dean says, “we did it.” And then Dean convulses. He yells, “We had a deal!” Dean, you should know by now that angels are just as slippery as demons in the deal-making department.

Sure enough, Michael hijacks Dean’s body, and vanishes, leaving Sam and Jack horrified in his wake.

Well, we definitely know what everybody will be dealing with next season.