Not an awful way to introduce a potential spinoff character 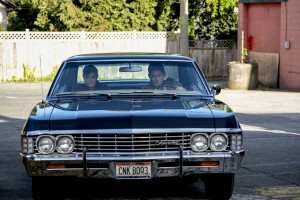 The SUPERNATURAL Season 13 episode “Patience” looks a lot like it exists to introduce its title character – that would by psychic teen Patience, played by Clark Backo, as opposed to supernatural, because, okay, enough of that – so that she can be worked into the upcoming spinoff episode “Wayward Sisters.” Leaving aside whether or not the spinoff is a good idea, “Patience” works well enough on its own.

After a young psychic is killed by a wraith (Jon Cor), Sam (Jared Padalecki) and Dean (Jensen Ackles) get a call from their old friend Missouri Moseley (Loretta Devine). The boys haven’t seen Missouri in over a decade – not since Season 1, in fact. The murdered psychic was Missouri’s protégé, and she needs help.

Trouble is, Sam doesn’t want to leave Jack (Alexander Calvert), the son of Lucifer and a human woman, who is having an identity crisis. Dean is exasperated, but leaves Sam and Jack in the bunker to meet up with Sheriff Jody Mills (Kim Rhodes). Missouri tells them that the wraith has developed a taste for psychics, and that she fears her family is in danger. Since Missouri’s son James (Adrian Holmes) refuses to listen to her, she wants Dean and Jody to go protect James and his daughter Patience.

What Missouri doesn’t tell Dean and Jody is that she has foreseen her own death at the hands – and sucker – of the wraith. Dean is devastated. James is upset by his mother’s death, but still seems hesitant to believe in the supernatural, until Patience is attacked at school. She had a dream about the attack, so she is ready enough to break off the wraith’s stinger. Dean and Jody chase off the wraith, though they’re unable to kill it.

Now James wants to run, but the wraith kidnaps Patience from her bedroom. It seems that James wanted to keep Missouri away from Patience, because Missouri insisted Patience was psychic and James felt this would put his child in danger. (This show is full of really dumb family dynamics, should you not have noticed.)

Patience sees Dean, Jody and James’ rescue attempt going badly before it happens, and is therefore able to call out timely warnings. Instead of the wraith killing everybody, Dean is able to kill the wraith.

Despite Patience clearly being psychic, James still wants her to put it aside and live a normal life. (To paraphrase BUFFY paraphrasing real-world parents, “Have you tried not being psychic?”) Dean advises Patience to go along with this. Jody takes Patience aside and says that Dean may not know what he’s talking about (score one for Jody here). Patience should be true to herself. Jody gives her card to Patience in case the young woman wants to reach out.

So now we know a) who Patience is, b) why she could be useful on a SUPERNATURAL spinoff (she’s psychic), and c) how she knows Jody, so we don’t have to have a whole episode establishing her. So far, so good. 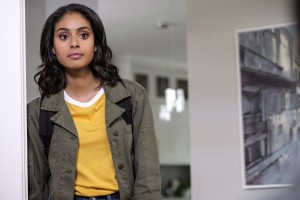 Meanwhile, back at the bunker, Sam tries to get Jack to harness his powers. Jack, who has previously tossed people across rooms and killed a Prince of Hell with his mind, now can’t move a pencil. Sam also shows Jack the video Kelly (Jack’s mom) made while she was pregnant with him, talking to her son. Jack is afraid he can only use his powers for harming people, which means he’s evil. Sam says this isn’t true. Recalling his own demonic days, he says he is sure Jack can be saved. Jack says that Dean doesn’t believe Jack and be saved and will kill him.

When Dean returns, Sam confronts him – did he really say he’d kill Jack? Dean denies saying exactly that, but c’mon, how’d you expect someone who’s really only a few days old to take it? Dean continues to blame Jack for Castiel’s (Misha Collins) death. Jack thinks of Castiel, and Castiel, who appears to be laying lifeless on a wooden floor in the middle of darkness, wakes up.

Okay, so in addition to Heaven, Hell, Limbo and the alternate universe, we now have the Big Wooden Floor-verse. Look, we’ve had “The French Mistake,” Japanese game shows and high school musicals, so why not? Can’t wait to hear the explanation for this.

To sum up, Sam and Dean may be irked at each other, but they’re not sulking, so that’s good. Jack is learning, which is good also. Jack seems to have found Castiel, which is even better. It is great seeing the divine Devine again, even briefly, and the spinoff stuff is massaged into the overall storyline with (so far) no major irritants. In short, “Patience” doesn’t exhaust ours.