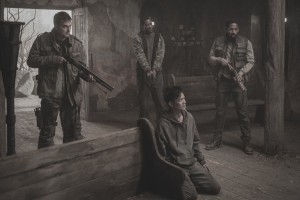 The archangel Gabriel (Richard Speight Jr.) might have run out on Sam (Jared Padalecki) and Dean (Jensen Ackles) after they nursed him back to health, but he’s not gone for long. In the SUPERNATURAL Season 13 episode “Unfinished Business,” we see that Gabriel has a kill list. He goes full Highlander with a sword and a duster, and duels with a Norse shapeshifter in a Colorado alley. Gabriel wins, but gets stabbed in the process.

So when Sam and Dean are holed up in a motel room where Rowena’s tracking spell on Gabriel has led them, guess who is knocking at the door. Turns out that Gabriel was able to use the tracking spell to find the boys. Holding the bloody wound in his side, Gabriel is hoping they’ve got some of his grace left, but they don’t. He’s too weak to leave. Then a couple of the shapeshifter’s brothers come looking for Gabriel and almost kill Sam. Gabriel kills one of the Norsemen and saves Sam. The other Norseman flees.

Finally, Gabriel explains. The two Norse beings he killed, and the one that ran, are all sons of Loki, Norse god of mischief. Dean then says what members of the audience who are still keeping score are thinking – hold on, Gabriel, aren’t you Loki?

And therein hangs the tale (if we can believe it). Way back in the day (eons ago), Gabriel was trying to avoid his family’s Heavenly civil war. Gabriel found Loki, who was being tortured in a cave. This is because Loki had annoyed his own father, Norse chief god Odin. Gabriel, feeling empathetic, freed Loki. Loki, in gratitude, let Gabriel use his Trickster identity so that Gabriel’s angelic brothers would stop looking for him.

And so it was, when Gabriel faked his death at the hands of Lucifer back in SUPERNATURAL Season 5, Loki again offered him shelter. But oops – Loki and his sons then sold Gabriel to Prince of Hell Asmodeus, who tortured Gabriel for years and years. Having already melted Asmodeus, Gabriel now wants revenge on Loki and Company. Dean says that revenge never makes anyone feel better, but Sam says maybe this time it can work. If he and Dean help Gabriel with his quest for vengeance, will the archangel then help them? 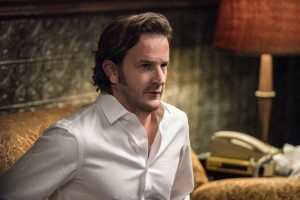 At this point, we almost expect Gabriel to take over for Dean as audience surrogate and ask, wait, since when has Dean been against revenge? Since when has Sam been for it? (About now, the reader may be asking, wait, you’re going to throw down for character consistency now? Over this? To which this reviewer can only respond, fair point, and drop it.)

Meanwhile, in the alternate universe, Lucifer’s powerful Nephelim son Jack (Alexander Calvert) and Sam and Dean’s mom Mary (Samantha Smith), along with the human rebels, have won a string of victories. The evil archangel Michael seems to have retreated with his troops. Jack thinks Michael is afraid of him.

The human rebels find this world’s Prophet of the Lord Kevin Tran (Osric Chau) chained up in the dungeon at the church Michael had been using as headquarters. Kevin begs for mercy. He thought Michael was going to save the world, and by the time he knew differently, he was stuck being his prophet. Kevin points out that the place where Michael has massed his armies is where the walls between the worlds are thin. Mary realizes that Michael means to attack our world. Jack thinks he can destroy Michael. Mary isn’t so sure.

Kevin opens his shirt to reveal that Michael has carved a bloody rune into Kevin’s chest. It’s meant to take out Mary and the humans and demoralize Jack. Kevin touches the rune and explodes. Jack protects Mary; the other humans with them aren’t so fortunate. Jack blames himself for not being able to protect people who believed in him. Mary comforts Jack, as she would a son.

Gabriel, Sam and Dean head to the cheap motel that Loki has taken over and magically spiffed up for his stay there. There’s a gunfight between our guys and Loki’s son and minions in a hallway. When the smoke clears, Gabriel and Sam are victorious – and Dean has gone to the penthouse without them.

Dean confronts Loki, who looks just like Gabriel (and is also played by Speight). Turns out that Loki gave Gabriel not only his identity, but also his face. Loki says he sold Gabriel to Asmodeus not for profit, but because Gabriel was (albeit accidentally) involved in the death of Loki’s father Odin at that ill-fated god gathering back in Season 5. Odin didn’t like Loki, but even so, family is family. (Loki seems to know Dean can relate to this concept.) Dean tries to stab Loki, but Loki is an illusion. The illusory Loki, however, can still hit Dean.

The real Loki is downstairs, confronting Gabriel. Loki sees that Gabriel doesn’t have his god-killing sword on him, and seems to know that the archangel is low on grace at the moment. Loki beats the crap out of Gabriel, and is about to kill him, when Sam and Dean show up with the sword. Loki accuses Gabriel of living for nothing, and tells him he’s going to die the same way. Gabriel says, “You first,” and drives the blade into Loki.

Gabriel says that he is in fact happy with his revenge, and is now ready to help the boys. No tricks? “Tricks are for kids,” Gabriel announces. He says he’s a whole new person. This is enough to make us worry that maybe he’s actually Loki, although Loki wouldn’t have angelic grace, so we’ll find out about that soon enough.

Back at the bunker, Castiel (offscreen) is helping Gabriel settle in while they all wait for his grace to rejuvenate. And then we get a classic SUPERNATURAL Sam and Dean scene. Sam is mad at Dean for sidelining him – trying to take on Loki by himself, going through the rift with Ketch instead of Sam, et cetera. Dean wants to protect Sam – look what happened the last time there was a Lucifer/Michael apocalypse. Sam died and went to Hell. Sam tells Dean that whatever they do, they’ll do it together, and if they die, they’ll do that together, too. Ah, brotherhood.

Gabriel is one of those characters who automatically makes any episode he’s in more fun, and “Unfinished Business” provides plenty of it. Speight also directed the episode, handling his actors well and making good use of the environments. He does particularly nice, atmospheric work in the abandoned church with cross-shaped white silhouettes after the explosion. “Unfinished Business” answers some lingering questions, reminds us of the stakes, and lets us believe that Gabriel could actually change, while still holding out the possibility that maybe he hasn’t.