The story barrels forward, and so does Jack 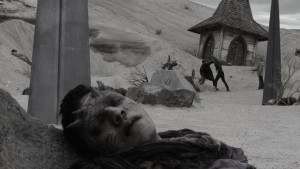 Mary tries to ditch Lucifer when they are blasted at by angels, but she doesn’t get very far. Lucifer rescues her from an alt-universe Hunter who seems intent on rape. Then they are both met by Lucifer’s brother, the Archangel Michael. In our universe, or at least SUPERNATURAL’s primary universe, Michael is still trapped in Hell, having a breakdown. In the alt-universe, Michael has killed Lucifer. He nevertheless senses that this is Lucifer. They fight a bit and then Michael declares that maybe he needs Lucifer.

Okay, this is interesting. As we have discovered, angels in the SUPERNATURAL-verse aren’t necessarily benign, so it’s completely unclear what Michael may want. However, having a whole new set of angels certainly opens up possibilities (including how we may see Castiel again). Also interesting is Lucifer’s assertion that he needs Mary so he can trade her to Sam (Jared Padalecki) and Dean (Jensen Ackles) for the safe return of his son. Mary can’t believe that Lucifer has genuine fatherly feelings, but going by what he’s said to everyone over the past season, it sounds like he does.

In Hell in our dimension, Prince of Hell Asmodeus shows up, vowing to whip the place into shape in Lucifer’s unexplained absence. His plan is to bring Jack to Hell and then guide him as a sort of power behind the throne. Asmodeus vaporizes a few less than enthusiastic demons to show he means business.

Dean and Sam continue to argue about Jack. Dean is sure Jack will manifest as evil and should be killed as soon as they figure out how to do it, while Sam thinks that Jack is basically a good kid with superpowers. The three of them stop at a motel on the long drive back to the bunker. Jack starts to enjoy watching SCOOBY-DOO. Dean starts to enjoy the cartoon as well, then stops himself, turns off the TV and throws Jack the nearest book: the motel room’s copy of the Bible.

The three guys are found there by Prophet of the Lord Donatello (Keith Szarabajka). This is a welcome surprise – he’s a very enjoyable character played by a terrific actor. Turns out Amara didn’t kill Donatello after all during their last encounter, just took his soul. We now will take an obligatory pause to wonder why being soulless doesn’t seem to have driven Donatello crazy the way it did Amara’s other victims. We will also wonder why Sam and especially Dean, who is in full paranoia overdrive at present, don’t ask if Donatello has done anything less than wholesome lately. We will further note that “The Rising Son” provides zero answer to the question, and move on.

Donatello has been feeling a little adrift lately – what with no Lord around to be the Prophet of and no soul – but he sensed a powerful presence that he thought might be Chuck (God) and tracked it to the motel. He does not sense that the presence is evil. Score one for Sam’s argument. Donatello is curious about Jack. Jack, now having read some of the Bible, figures that God is his grandfather, which is essentially correct.

The boys try to get Jack a warding tattoo like the ones they have. Jack’s first reaction to the needle is to telekinetically throw the poor tattoo artist across the room. Then Jack reins himself in and says that he knows pain is an important part of life. The tattoo artist completes his work – and Jack’s self-healing skin promptly removes all traces of the ink. 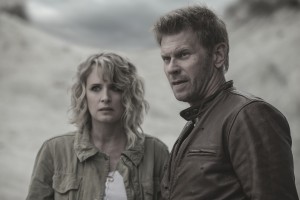 Back at the hotel, Dean says that the vanishing tattoos prove his point. The argument gets so heated that Jack teleports out to the alley. Sam finds Jack and tries to say that Dean doesn’t hate Jack, he’s just confused, because he wants to protect Jack but also worried that he may need to protect other people from Jack.

Out at a bar, Dean talks to a waitress, who turns out to be Asmodeus in disguise (the actual waitress is dead behind the counter). Donatello and Sam have a conversation about Jack. The lore on angels says that a nephilim (the child of a human and an angel) will grow to be more powerful than his sire. Since Jack’s sire is Lucifer, an archangel, that’s very powerful indeed.

Donatello leaves the room and then comes back when Dean is there. Except Donatello says that he hadn’t just talked to Sam. Oops, that was Asmodeus pretending to be Donatello. The guys don’t know about Asmodeus per se, but they have a bad feeling about it, and sure enough, Jack is nowhere to be found.

Asmodeus, pretending to be Donatello – let’s just call this version of him Asmodon – has had Jack teleport them to Casper, Wyoming. Asmodon tells Jack that some very brave warriors of God, the Sladeen, were trapped in a cave in Hell. If Jack wants to prove himself to Grandpa God, he must rescue the Sladeen. We heard earlier in the episode how Lucifer walled the Sladeen away eons ago because even he was scared of them. Jack, wanting to please everybody, sets about using his energy to blast through the earth.

Donatello helps guide Sam and Dean to the spot – that Prophet of the Lord mantle is very helpful with finding angels and demons. Jasper, Wyoming is the site of a Hellgate. They come upon Asmodon exhorting Jack to “Do it for God!” as the young nephilim continues to telekinetically dig. We see some scaly, pointy-clawed Sladeen arms start to come up out of the pit.

Dean shoots Asmodon, who turns back into Asmodeus. Asmodeus starts telekinetically choking Sam, Dean and Donatello. Asmodeus tries persuading Jack to keep going, but Jack yells at him, “You’re hurting my friends!” Jack makes Asmodeus disappear, and the hole to the Hell cave vanishes, taking the Sladeen with it.

So far as Sam and Dean can tell, Asmodeus is that last surviving Prince of Hell – they have killed the other three. Sam feels that Jack has proved himself by saving them, but Dean is not convinced, saying that what Jack did was a reflex.

Dean finds Jack stabbing himself over and over with an angel blade. The wounds keep healing. Dean takes the knife from Jack – he can cause himself pain with it, but he can’t really injure himself. Jack says he’s afraid he will hurt someone and knows that Dean is afraid of this, too. Jack knows that Sam thinks he can be a good person, but that Dean doesn’t. Dean says Jack is correct, and that if Dean turns out to be right, he will be the one to kill Jack.

SUPERNATURAL has been around for so long that by now both Sam and Dean have each held every position there is at some point. It’s sort of refreshing to see them essentially return to a version of who they were at the beginning, with Dean world-weary and cynical and Sam relatively optimistic. Dean is right that things often turn out badly for them, but Sam is right when he points out that they have always come back from rock-bottom (heck, how many times have the brothers lost each other by now? Yes, there is an exact count, but that’s not the point). But Dean is grieving both Mary and Castiel in a way that Sam is not and cannot. Dean, unlike Sam, has actual memories of Mary, and while of course Sam and Castiel were friends, it wasn’t the bond that Dean and Cass shared. Dean even misses Crowley. In short, he’s suffered too many big losses at once and has consequently blown a fuse. Sam recognizes it and the writers recognize it, and it is being handled by both characters and script in a way that is fully consistent with what we know of these people.

“The Rising Son” gives us a lot of tantalizing plot threads – will Jack break bad or good? What does Michael want with Lucifer? – at the same time it honors SUPERNATURAL history.