The executive producer talks about working in the Marvel-verse 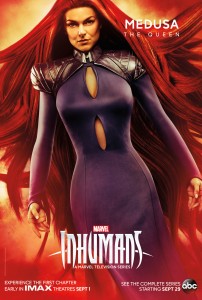 In MARVEL’S INHUMANS, Friday nights on ABC, there is trouble on the moon and on the Earth. King Black Bolt (Anson Mount), whose voice can destroy walls, and his queen Medusa (Serinda Swan), whose hair can be a tensile weapon, are rulers of a hidden kingdom on the moon, with a super-powered upper class. However, Black Bolt’s human brother Maximus (Iwan Rheon) has made a play for power, and now all hell is breaking loose.

ASSIGNMENT X: Prior to working with Marvel, a lot of your material was at least somewhat naturalistic. What made you decide you wanted to jump into the fantasy realm?

SCOTT BUCK: I think it was just the appeal in this situation of the characters. How do we write these people? Every show that I’ve been drawn to has been because of really interesting characters. And so it’s just the approach of looking at these people not so much as superheroes, but as people who happen to have a gift. So looking at them that way makes them sort of complex. Making them as grounded and real as possible was appealing to me.

AX: Are there any characters in the MARVEL’S INHUMANS series who are not in the INHUMANS comics?

BUCK: Oh, sure, absolutely. I can’t tell you too much about that, but you’ll certainly meet people in the course of the series who are new to the Inhuman family.

AX: Is Season 1 a dramatization of any INHUMANS comic books, or are the scripts new stories?

BUCK: No, it’s new stories. It’s characters that should be familiar to people who have read the comic books. We try to stay very true to who they are. But there have also been so many different versions of INHUMANS over the years that – we read most of the stories, but [there are] big things that seem new and more relevant to what’s going on today.

AX: Was there any concern in casting Iwan Rheon, because he recently and brilliantly played the extraordinarily evil Ramsay Bolton on GAME OF THRONES, that people were going to take one look at his character Maximus and say, “Aggh, worst person ever”?

BUCK: No. I mean, he’s quite well-known for playing such a dark, evil character, but he’s playing a very different sort of character in this. He’s certainly quite well-known and well-respected for that role, because he’s just a tremendous actor, which is why we wanted him. 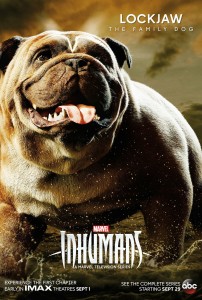 AX: There’s a lot of intrigue, obviously, in MARVEL’S INHUMANS. Did you learn anything in the construction of all of the interwoven plotlines on DEXTER about writing characters who have hidden agendas?

BUCK: I think one thing that happens with every show I work on is that I learn something. Because it’s not like I’m complete as a writer. Ideally, I continue to grow and get better and learn new things. I certainly learned a lot of stuff on DEXTER, especially coming from SIX FEET UNDER, previously to that, which is a very different show, and then going to Marvel. The two shows I’ve done for Marvel are extremely different [from one another], so I’ve learned a great deal working on these shows as well. It’s always a progression, I think.

AX: How is it working within such a large universe as Marvel, where all the TV shows are on some level connected to each other, even if just as subtext?

BUCK: It’s a little crazy, a little intimidating, because there was a lot that I needed to learn about the Marvel universe in order to write these kind of shows, because even though this is a completely standalone show – the audience doesn’t need to have seen any other Marvel projects – I need to know what’s going on in the other Marvel shows so that we fit cohesively into that world.

BUCK: Yes, I mean, I think we all happen in effect at pretty much the same time, and our Inhumans are at least somewhat aware of the Inhumans who are on Earth.

AX: MARVEL’S INHUMANS shoots in Hawaii. Is it difficult to run a show there?

BUCK: It’s not quite as idyllic as it sounds. When I first heard “shooting in Hawaii,” it sounded fantastic. And then you get there, and of course Hawaii is beautiful and the people are wonderful, but still, you’re shooting twelve hours a day. You don’t quite have all the resources that you would have in Los Angeles, so that can make things very difficult. The weather is unpredictable in Hawaii as well, so it may be raining when you start shooting a scene, and by the time you’re done with the scene, the sun is out and it’s shining. So there are production difficulties, but other than that, it’s a fantastic place to shoot. 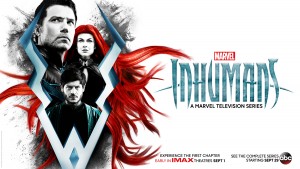 AX: Does ABC still have any of its apparatus in place from the years when its series LOST was shooting in Hawaii?

BUCK: No. We had a lot of crew members who had worked on LOST, but there’s a very limited work pool there, so when there’s production there, the crew is nabbed up very quickly. But fortunately, because of the history of ABC and LOST, we were able to get some of the best people in Hawaii, as well as bringing people out there.

AX: And what would you most like people to know about MARVEL’S INHUMANS?

BUCK: I think it’s just a fun, relatable show. If you like comic books, if you like the original INHUMANS, hopefully, you will love this. If you’ve never heard of the Inhumans, than this is a fun, exciting, compelling Marvel family show.