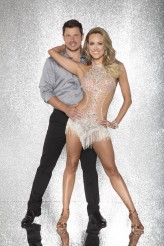 DWTS: Movie Night crafted a nifty night of suspense but no tale twister 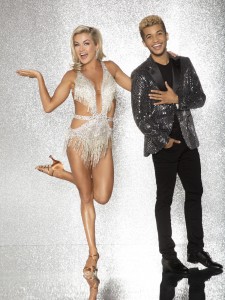 DANCING WITH THE STARS: Season 25 – Movie Night had drama, science fiction and animation but no genre could save Nick Lachey & Peta Murgatroyd from being swept up off the cutting room floor. Tonight, we said goodbye to Lachey & Murgatroyd as Lindsey Stirling & Mark Ballas up’ed their game yet again, achieving a perfect 40 score for the night. On their heels is Jordan Fisher & the other Lindsey, Arnold that is, with 39 points. At the bottom is Drew Scott & Emma Slater with just 30 points. Sitting in for the show as a guest judge was Shania Twain who is a wonderful singer but not so great judge. Sorry, not every entertainer is a good critic. She fumbled and tripped on her words more than Lachey did on his feet all season. Still, next week are the team dances, eight are left. Stay tuned.

Vanessa Lachey (TV host) and her partner Maksim Chmerkovskiy
Gave it her all. Carrie Ann Inaba called her Quickstep fantastic. Len Goodman told her to keep her posture up a little more. Shania Twain said she was sassy and Bruno Tonioli called her delicious.
Scores: Inaba – 9, Tonioli – 9, Twain -9, Goodman – 9, Harland – 9

Jordan Fisher (actor) and his partner Lindsey Arnold
Such great movements. Inaba said he danced with a wave of gorgeousness. Goodman called his Rumba well crafted. Twain said he had a great connection with his partner. Tonioli called it effortless.
Scores: Inaba – 10, Tonioli – 10, Twain – 10, Goodman – 9, Harland – 9

Victoria Arlen (paralympic athlete) and her partner Valentin Chmerkovskiy
Gimmicks got in the way. Inaba called her Paso Doble well rehearsed. Goodman was very pleased with it. Twain said she had great energy and Tonioli said the steps were there.
Scores: Inaba – 8, Tonioli – 8, Twain – 7, Goodman – 8, Harland – 8

Who Went Home: Nick Lachey & Peta Murgatroyd
Who Has Legs to Take Home the Mirror Ball: Lindsey and Jordan are neck and neck.