TV Review: DANCING WITH THE STARS – Season 25 – Week 4 – Most Memorable Year – Derek Fisher is out 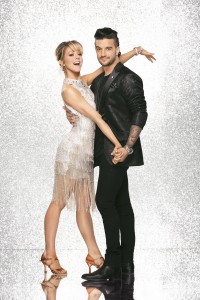 Every season on DANCING WITH THE STARS there is a week where the tears flow like roaring waterfalls gushing down from a cliff top. That night – Most Memorable Year – was tonight on DWTS:25. Each celeb picked a year that had great meaning to them and then danced in tribute to that year. The result is usually pretty good scores for all and this season was no exception. In fact, six couples ended the night in a six-way tie with 24 points. But ending it on top was Jordan Fisher & Lindsey Arnold with an almost perfect score of 29 points. Darn that Len! Sadly, the night was less than perfect for another Fisher. Derek Fisher & Sharna Burgess were eliminated at night’s end. Victoria Arlen & Val Chmerkovskiy scored 27 points with Lindsey Stirling & Mark Ballas rounding out the top three with 26 points. Nick Lachey & Peta Murgatroyd received the lowest amount of points with 22 for the night. Stay tuned!

Frankie Muniz (actor) and his partner Witney Carson
All out! Inaba said his Quickstep was contagious. Goodman called it light. Tonioli said it was springy.
Scores: Inaba – 8, Tonioli – 8, Goodman – 8, Harland – 8

Sasha Pieterse (actress) and her partner Gleb Savchenko
A little stilted. Inaba said her Foxtrot was well done. Goodman said there was a quality to it. Tonioli said it was proper.
Scores: Inaba – 8, Tonioli – 8, Goodman – 8, Harland – 8

Who Went Home: Derek Fisher & Sharna Burgess
Who Has Legs to Take Home the Mirror Ball: Lindsey vs. Vanessa for the win, with Jordan and Frankie moving up on them.