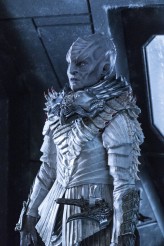 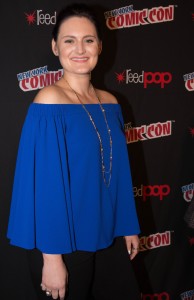 At a Q&A session for STAR TREK: DISCOVERY, actress Mary Chieffo describes herself as a “giddy Klingon.” Someone points out that this is perhaps the first and only time the phrase “giddy Klingon” has ever been uttered, but it is accurate. Chieffo (pronounced Chief-Oh) plays the Klingon warrior L’Rell, and she is absolutely giddy about having the opportunity to be part of the STAR TREK franchise.

STAR TREK: DISCOVERY premiered on the broadcast CBS network. The premiere and all subsequent episodes will be available (a new one coming out each Sunday over fifteen weeks) on CBS All-Access. Set ten years earlier than the original STAR TREK, DISCOVERY takes place when the Federation and the Klingon Empire wind up at all-out war.

Chieffo is an accomplished stage and film actress who went into the family business (her parents are performers Michael Chieffo and Beth Grant). Following a Q&A session with her colleagues, the still visibly delighted Chieffo is available for some one-on-one discussion.

ASSIGNMENT X: Is it spoilery to ask L’Rell’s rank?

AX: Are there particular Klingon characters who have inspired you?

CHIEFFO: Yes, it’s been great. I went back and watched all the Klingon-featured episodes throughout the series. And I fell in love with so many of them, but looking at the female characters, particularly wanting to know where L’Rell fit in with that, I really love K’Ehleyr [played by Suzie Plakson on STAR TREK: THE NEXT GENERATION], who is Worf’s [Michael Dorn] first lover and sadly reaches her demise, but I love her, I love her spunk. She’s half-Klingon, but I count her as Klingon. In DEEP SPACE NINE, I loved Grilka [Mary Kay Adams], who is full Klingon, because she has such a great story of losing her husband, eventually, after trying to get Quark [Armin Shimerman] to help her, which is a big move for this very patriarchal species, and then B’Ellana Torres [played by Roxann Dawson on STAR TREK: VOYAGER] is fabulous and wonderful.

AX: How are you dealing with the prosthetic makeup you have to wear to play a Klingon?

CHIEFFO: It’s been a learning curve, but the [makeup] team we have in Toronto – James MacKinnon is our head, and he is a profoundly incredible artist. We have a real system, we’ve narrowed it down to about two hours [to apply the makeup], we play ‘80s music in the trailer, it’s fun.

AX: How fluent are you in the Klingon language?

CHIEFFO: Well, I can read and speak it quite well, but I’m still working on the fluency [laughs]. [Says Klingon word for “Fire on the other ship”], or my favorite L’Rell phrase [which sounds like “P’char mek Y’mosh”], which is, “To conquer, compromise.” So yeah. And then the one that I’m going to be using a lot, [sounds like “Ke pek meen ze ankol”], which is, “I cannot reveal military secrets.” 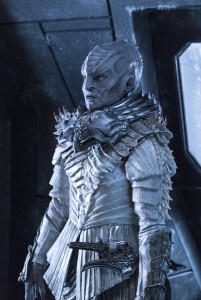 AX: Not that you don’t have your own process, but one of the series regulars is Doug Jones, who plays Discovery’s Kelpien officer Saru. He has spent much of his career working in heavy prosthetics makeup. Have you talked to him at all about working with prosthetics?

CHIEFFO: Oh, my gosh. He is the sweetest man alive. We’ve had coffee, we really have talked about his process with the different characters that he’s played, and from the get-go, when he met me at the first table read, I said, “Yeah, it’s my first time in prosthetics,” and he said [sympathetically], “Oh, my darling.” And from that point on, if we crossed paths in the prosthetics trailer, he checks in with me, makes sure I’m doing well, and yeah, he’s a lovely human being. I’ve always been inspired by his work, so to be able to talk to him personally, and to be executing the prosthetics with him around is really surreal and wonderful.

AX: Given the conflict between the Federation and the Klingons, do you feel at all like you’re making a war movie?

CHIEFFO: With STAR TREK? I’ll answer you with – Shazad Latif, who’s also in the cast [as Lt. Tyler], he’s like, “It’s like we’re making seven movies.” So in that sense, yes, it is epic. There’s a lot of fighting. I get to beat up and get beat up and wear armor. It’s epic. It’s Greek mythology. It’s every kind of story that we love to see. I relate the most to epic stories. So yes, it is like a war movie, I guess. But those scenes that we all love from the original series of them talking about these ideas – our writers’ room is incredible. It’s such a mix. We have young Trekkies and old Trekkies and people that just love sci-fi in general. My favorite writer duo is Erika [Lippoldt] and Bo Yeon [Kim]. They’re these two young women who are PhDs, brilliant, love sci-fi and they are writing incredible material for all of us. I look at some of the stuff that Anthony Rapp [who plays Lt. Stamets] has to say, and I’m like, “Oh, my God.” It’s all founded in real science, but updated. So I really think, yeah, it is a war movie, but it has a lot of intelligence and heart. And humor, a lot of humor.

AX: Is being part of the STAR TREK franchise everything you thought it was going to be?

CHIEFFO: It’s been that and more. Coming into it, I was just thrilled, both as a feminist and as a geek, I was like, “I get to be a female warrior, I get to be an alien.” So that was the initial exciting reaction. But this cast is insane. They’re so beautiful. Sonequa [Martin-Green, who plays Lt. Michael Burnham] is the greatest leader ever. She brings us all together, we have game nights, we have dinners. The other day, I had a big scene, and she came into the prosthetics trailer afterwards and said, “I heard it went well.” I’m like, “You don’t have to do that!” But she does. There’s so much love on that set. The crew, everyone understands the profundity of what we’re doing, and there are a lot of really magical moments when scenes are really clicking when you just feel that energy and for that, I am forever grateful.

I feel like it’s one of those things that hits me in waves. When the new trailer dropped, I was like, “Oh, my gosh, it’s really happening.” Because when you’re there on the set, it looks awesome. There are times when I’ve walked onto a set and it’s like, that is the bridge, and that’s really exciting. But I think it’s one of those things where I show up to tell the story, and I do the scene, and I live through it, and it’s really been wonderful. And then maybe in retrospect, I’m like, “I just did that as a Klingon.” And I really do feel that we are paying so much respect for what is from before, but we’re really taking it to another level. As we hope. That is the message of STAR TREK, too, is that progress is infinite, and that we never stop growing and changing, and I think so many of the themes that have always existed are just getting to be even more prominently explored. 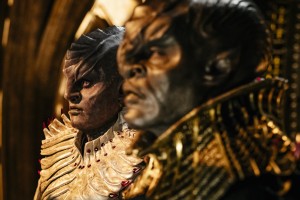 CHIEFFO: Well, crazily enough, I have adapted the Shakespeare play OTHELLO into a modern miniseries, and we’re doing gender- and color-conscious casting, and I am playing Iago as a woman in the military, like a G.I. Jane sort of thing. We’re filming it in virtual reality, through JuVee Productions at Facebook. So that’s in the works – that’s after I wrap with this [season]. [The role in STAR TREK: DISCOVERY] came about as we were working on the film – we had to put that on the back burner. But I’m hoping that in that same way of, it’s a story that I think we only hear about, preconceived ideas we have about the Other, hopefully that’ll be percolating in the fall.

AX: Are you prepared to deal with fandom?

CHIEFFO: I’m thrilled, because as I said, I am a geek, and I have franchises that I follow –HARRY POTTER, so working with Jason Isaacs [who plays Discovery Captain Gabriel Lorca] is really exciting [laughs]. But what’s so wonderful is to find him to be such an accommodating and wonderful person and actor, who really values the work, and being able to have that ensemble with someone I look up to, in the same way as being able to be part of this franchise that I’ve come to love so deeply. Even though I wasn’t a fan from childhood, watching all those shows and watching the series, I’ve fallen in love with it, too, and I think that I respect the fans and I want to do them justice, and I really hope that I can help bring voice to this new iteration of Klingon that is very much based in canon. I always say that. It’s a redesign, but it is paying so much respect to everything that has come before.

AX: Did you do San Diego Comic-Con?

CHIEFFO: I didn’t. That was Federation-only at Comic-Con. [The Las Vegas STAR TREK convention] is this Klingon’s first time out.

AX: How are you enjoying doing press for STAR TREK: DISCOVERY?

CHIEFFO: It’s definitely my first flavor of all of it, and it’s thrilling. It’s exciting to see how much excitement there is around the show and how people are interested in what we’ve been working on and I hope that I can be a good spokesperson for it, because I believe in it, and I’m just thrilled to be included. If I didn’t have anything to say [it would be awkward], but because I feel so passionately about what I want to say, and I feel like there’s a lot of topics we can touch upon, I’m excited. The more that I can assure everyone that we’re creating a good story, the better.