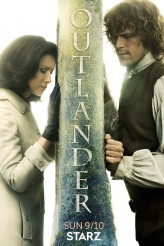 The actor talks his dual roles on the Starz series 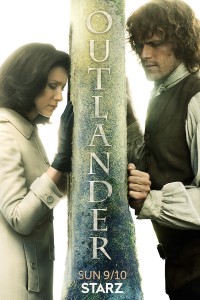 OUTLANDER, based on the series of novels by Diana Gabaldon, tells of the centuries-spanning love affair between British WWII nurse-turned-surgeon Claire (Caitriona Balfe) and 18th-century Highlander Jamie Fraser (Sam Heughan). Now in its third season on Starz on Sunday nights, OUTLANDER took Claire through a ring of standing stones from her mid-20th-century life back to a few years before Bonnie Prince Charlie lost Scotland to the British at the Battle of Culloden.

At the end of Season 2, Jamie sent Claire back to her own time through the stones; she was pregnant with his child and he was sure he was going to die at Culloden. Season 3 begins with the revelation that Jamie survived, Claire’s discovery of this and her eventual determination to return to him.

Complicating Claire’s life in the present is her marriage to historian Frank Randall. Making both Jamie and Claire’s life hell in the past is Frank’s ancestor Jonathan “Black Jack” Randall, a British officer whose sadism led to his almost raping Claire (twice) and flogging and eventually actually raping Jamie, as well as tormenting the Scotsman’s mind.

Both the reserved, gentlemanly Frank and the profoundly brutal Jack are played by London-born Tobias Menzies. The English actor has had a prolific career, including playing Marcus Junius Brutus in the series ROME, the tormented Edmure Tully in GAME OF THRONES, Geoffrey Dromgoole in THE NIGHT MANAGER and the werewolf Marius in UNDERWORLD: BLOOD WARS. This season, Menzies appears in the comedy series CATASTROPHE.

OUTLANDER’s Season 3 premiere on September 10 saw Jack finally meet his lethal comeuppance at Jamie’s hands. At a Q&A session for OUTLANDER, Menzies is how he feels about wrapping up the complicated enmity between Jack and Jamie, He replies, “I think it’s a difficult storyline to tie up, in a way. Where do you go, especially after the stuff towards the end of Season 1? They meet on the battlefield of Culloden, almost in flashback. It’s Jamie’s kind of hallucination as he remembers fragments of this encounter. So Jack is buried in there. It’s a nonverbal tying up of the story. It’s this strange kind of dance. Always with their stuff, I think both the writers and performers try to look for an unusual angle. So it wasn’t just a straightforward fight. There’s something odder going on with them. I like the way it’s come out. It’s sort of a strange kind of part fight, part dance, part embrace, and I feel like a fitting end to this very peculiar kind of quasi-love affair.”

Frank also exits OUTLANDER this season. Is it possible that Menzies may appear as another member of the Randall family? Executive producer Ronald Moore replies, “The Randall family tree is a very broad one. You never know. Tobias has been such a key part of the show from the very beginning, it’s very difficult to imagine that he’s not part of the family going forward. And you never say never. Who knows? There will be various flashbacks, and we do have a time-travel show. So the possibilities are there, but we don’t really have anything on the boards at the moment.”

“Although we feel like he might come back as a female member of the Randall family,” executive producer Maril Davis jokes.

“That would be great,” Menzies says.

After the Q&A, Menzies remains available for some follow-up discussion.

ASSIGNMENT X: Is Jack Randall a particularly dark character for you?

TOBIAS MENZIES: This is by far, of all the dark ones I’ve played – there are not many limits to his sort of depravities, so yeah, very dark.

AX: You have some pretty extreme scenes as Jack. Can you talk about your mindset in approaching those sequences, and whether you had to take time afterwards, or whether you can just go, “Okay, that’s it” and drop it as soon as they call “Cut”?

MENZIES: You are talking about the stuff where he talks about his sadism and his sort of relationship with [Jamie]. It’s a weird head space to try to get into, but that’s what’s interesting about acting, that you get to explore and think and maybe say things and do things that you are not supposed to do in real life, which is good. It’s certainly why I like acting, why I get into it. I really relish those opportunities for that in this show, [which] have been quite extensive. It’s an exploration of a sadist, someone who is interested in other people’s pain barriers. That’s interesting territory to explore.

AX: Has it helpful for you to switch back and forth between Jack and Frank, or would you actually need to take some time off of OUTLANDER and play another part altogether if you weren’t playing Frank?

MENZIES: No, I didn’t find that the challenge. The challenge was in the sort of details, really, sort of making it as specific as possible. They’re just different facets of my own personality. You just delve in and dig out different bits of yourself, whatever bits of your imagination.

AX: How aware were you of this period of history in England and Scotland before you got involved in OUTLANDER?

MENZIES: You mean the Jacobite Rebellion? I hadn’t really read about it. So it definitely was one of the nice things [about working on the series] – you learn about new things.

AX: Do you think that Frank gets worn down over time by what he feels are concessions to Claire that don’t get reciprocal concessions from her?

MENZIES: Yeah. I think what wears them out eventually is kind of, they get sadness and resignation and those are the things that ultimately kill all relationships, aren’t they? When you’re still fighting, then there’s hope, but when you stop fighting … and I think that’s true, and I think also the arrival of the child [Brianna, Claire’s daughter by Jamie, who she raises with Frank as Frank’s child]. I think in some ways, Brianna replaces Claire in his affections. So all those sort of things conspire to mean that Frank feels ready to leave.

AX: To change the subject for a moment, how was playing a werewolf in UNDERWORLD: BLOOD WARS?

MENZIES: Really fun. It’s one of the nice things about [being an actor], these different challenges – it was a very physical challenge. Interesting in a different way.

MENZIES: I’ve just been making something for AMC called THE TERROR, which is about an Arctic expedition in the 1840s, and everything goes wrong.

AX: And what would you most like people to know about OUTLANDER Season 3?

MENZIES: That’s always a hard question to answer. I think there’s a lot to look forward to. I think this season is very different to the season that preceded it. The story continues to move quick, and in surprising ways.

This interview was conducted during Starz’s portion of the Summer 2017 Television Critics Association (TCA) press tour.