OUTLANDER: Sophie Skelton on family ties in Season 3 and the new DAY OF THE DEAD: BLOODLINE – Exclusive Interview 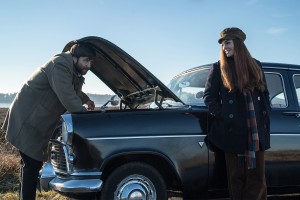 OUTLANDER has its third-season finale this Sunday, December 10, on Starz. Fans of the series based on Diana Gabaldon’s novels need not fear. OUTLANDER, which chronicles the enduring romance between twentieth-century nurse-turned-doctor/accidental time traveler Claire Randall (Caitriona Balfe) and her soulmate, eighteenth-century Highlander Jamie Fraser (Sam Heughan), has been renewed for a fourth season and is in talks for a fifth.

English actress Sophie Skelton plays Brianna Randall, the daughter of Claire and Jamie, who grows up in America believing Claire’s twentieth-century spouse Frank Randall (Tobias Menzies) is her real father. Some time after Frank’s death, Claire tells Brianna the truth. Brianna at first doesn’t want to believe it, but eventually realizes Claire is being honest. Brianna helps her mother return to Jamie and – spoiler alert – eventually journeys to eighteenth-century Scotland herself.

ASSIGNMENT X: Were you familiar with the OUTLANDER books when you got involved in the series?

SOPHIE SKELTON: When the audition came thro ugh, I read the books. Obviously, you don’t always have a monumental amount of time before an audition, but I read [Books] Two through Four for Brianna, because she’s not in the first one, just to really delve into Bri and get inside of her head. And then a little bit of time passed and I managed to watch the [first] season, and then I read Books One through Four again just to prep for Bri. So I’m an avid book fan.

AX: Brianna has an American accent in the show. Was that something you already knew how to do?

SKELTON: Yeah. Luckily, I did. I grew up watching a lot of FRIENDS [laughs]. I actually preferred doing a different accent to my own, because then you’re already half in the character. It’s more removed from yourself and it’s just nice. I did work with an accent coach a couple of weeks prior to starting filming, because we toyed with the idea of giving Brianna a Boston accent, because she’s from Boston, but in the end, we just decided to keep it very general. She went through a private Catholic school in the ‘60s, and we thought she had that drummed out of her, just to make her a neutral American, because she’s the only American in the show at the minute, and we didn’t want it to be too sore-thumb-standing-out-ish.

AX: Do you have a preference for Brianna in the ‘60s, or when she gets to the past?

SKELTON: You know, I’m such an old century geek. I love Jane Austen and all of that, so running around the Highlands in a corset is really appealing to me. I think in terms of Bri, in the ‘60s, she’s got this very modern ballsiness that Claire has, and that’s so beautiful to play, but I think it’ll be really nice going back to the eighteenth century and being able to play Brianna as a modern woman out of her time, because she then has the engineering mindset. While Claire has to adapt her future knowledge to fit in with that past time, she delves into the world of herbs and things like that, the medicine world, Bri really delves into engineering, and things that you can take for granted in the ‘60s, she then has to adapt and build in the 1700s. So I think it will be really great for Bri.

AX: Frank dies fairly early in Season 3. Did you have many scenes with Tobias Menzies?

SKELTON: Well, Tobias and I had Brianna’s sixteenth birthday scene and Brianna’s graduation. He actually has a lot of scenes with [young actress Niamh Elwell, who plays Brianna as a child] mini-Bri [laughs]. We didn’t have all that many, but it was great to work with Tobias. He’s a great guy to have on set. He’s so calm and collected, but at the same time, he’s has bright energy and a funny guy, he’s so charming, so it was really nice to be able to do scenes together.

AX: Do you have a preference for the types of scenes Brianna is in – where she’s in conflict with her mother, where she’s bonding with potential love interest Roger, played by Richard Rankin …?

SKELTON: Yeah. What’s nice about this season is that you see a lot of Bri really struggling, this internal struggle that you see. Brianna’s very guarded, she won’t let you see a whole lot, and I think in Episode Thirteen [of Season 2], that was very much apparent with Bri. She really lashed out against Claire when this whole information about Jamie came to light. And that’s nice to play, but it’s nicer to play the raw side of Brianna, where she lets her guard down and lets people see the vulnerability to her. So I did prefer her [vulnerable] scenes, especially Episode Five in Season 3. [Season 2] Episode Thirteen is very much her hotheadedness coming out, whereas Season 3, it’s really nice to be able to have that really raw, vulnerable side of Brianna. 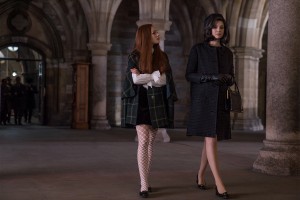 AX: Was there anything beside the American accent you had to learn in order to play Brianna?

SKELTON: Yeah. I massively watched Season 1 on repeat to incorporate both Jamie and Claire’s mannerisms and their essence into Brianna, just so that she was feasibly their child. So there was that side of it, and just looking at women in the ‘60s and how they held themselves, their demeanor, how they were. Brianna is very stoic and very held like Jamie, but she also has this pride about her. She is, as I said, very modern for her time and she’s done so well, she’s almost like Claire in that she’s really fought against her time and become against all odds this well-credited historian, because she’s studying history, majoring in history, which for a woman of the time is a great achievement. So just kind of capturing that essence of the ‘60s. It was a very wild time, I think [laughs]. Bri has wonderful fiery ballsiness about her, which is really cool to capture. 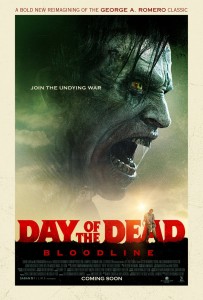 SKELTON: Yeah. Ones that are about to come out – I have a film, a remake of DAY OF THE DEAD, the classic cult horror [originally made by the late] George Romero. This one’s written by Mark Tonderai. It’s really great. I play the lead character, Zoe, and we follow her. She starts off as a medical student, and then we cut to five years later, where she’s in this old army base compound, trying to find a vaccine for the zombie virus. She’s really cool and, again, she’s such a strong character. Different to Bri, strong in a different way. And then I have another one for the same production company, actually, called #211, [with] Nicolas Cage. I play his daughter, and my character, again, really strong, but in a different way. She’s married to his partner in crime, if you like, and she suffers with some death and some heartbreak and things like that.

AX: Do you enjoy the horror genre?

SKELTON: I actually really do like watching horror movies. I enjoy that sick adrenaline rush [laughs]. But this one is a really interesting adaptation. We made it more of a psychological thriller. It’s more about a zombie who doesn’t fully turn, so it’s half-human, half-zombie. It’s a figure from my character Zoe’s past. She’s sexually assaulted by this man, and then he comes back five years later as half-human, half-zombie. It’s a really interesting story. It touches on the original, but it is more of a psychological take. Horror’s always fun, but it has a lot of the drama element, which is really cool as well.

AX: And what would you most like people to know about OUTLANDER Season 3?

SKELTON: Well, apparently, it’s the best one yet, so you’ve got that to know [laughs]. You’ve got more of the action, you start out with Culloden, you’ve got that beautiful love story, you’ve got Brianna and Roger blossoming and their love, you’ve got still that sci-fi element of time travel, but then you’ve got all those true historical events. So for OUTLANDER Season 3, there are so many twists and turns and there’s so much that you don’t expect, there’s just a bit in it for everyone. Whatever genre you like, it genuinely has that in there.