The actor talks playing an agent 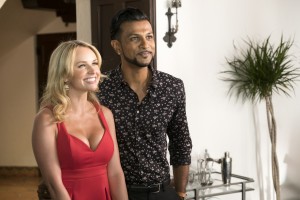 In WHITE FAMOUS, which just completed its first season on Showtime, Jay Pharoah portrays standup comic Floyd Mooney, who is trying to balance his original fan base with “breakout” fame.

Utkarsh Ambudcar plays Floyd’s agent Malcolm. Ambudcar, originally from Maryland, has an arc on THE MINDY PROJECT as the heroine’s relative. He’s also been in a host of other series and films, including PITCH PERFECT and BARBERSHOP: THE NEXT CUT.

Often, actors have to go into strange surroundings to research their characters, but most of them have met at least a few agents. Ambudkar talks about playing someone from the real world in WHITE FAMOUS’s bigger than life take on Hollywood.

ASSIGNMENT X: Is Malcolm based on your agent, or agents you have known, or is he totally a creation of the show?

UTKARSH AMBUDKAR: I think he’s just a creation of [WHITE FAMOUS co-creator] Tom Kapinos’ mind, and I’ve had the joy of being able to play it, and it’s just basically a young dude who has no legs to stand on, pretending like he’s some sort of superstar and trying his very best to make it in Hollywood as a minority, and he’s basically all braggadocio, all confidence, all heart, doesn’t make the best choices, and how he affects Floyd, Jay Pharoah’s character, is what’s fun about the relationship. He simultaneously can do the best and worst thing. Which I think is where a lot of comedy comes. It’s very George Costanza [Jason Alexander’s character on SEINFELD] in a lot of ways.

AX: How does your agent feel about your performance? Does he feel that it’s any kind of a comment on him, or he thinks of it as just another character?

AMBUDKAR: I think my agent is the coolest dude. He’s such a regular, normal, well-adjusted human being that I don’t think he’ll take any offense to it. [joking] But my manager might, because he’s a wolverine. Agents mean well, but it’s always about the bottom line, and about money, and how can you care for somebody’s well-being and also about their financial status at the same time. That’s the challenge.

AX: Do you enjoy the half-hour comedy form?

AMBUDKAR: Sure. I enjoy any form that lets me do what I love to do, which is acting and comedy and working with great people who are talented, and come to work with a joyful disposition. You can give me fifteen minutes or fifty-five, I’m happy.

AX: Do you come from the standup world?

AMBUDKAR: No. The improv world, but I studied acting at NYU and got into comedy because that’s where they decide to put me, and I’ve enjoyed it thoroughly, working with the rhythm and the music that comes with comedy. 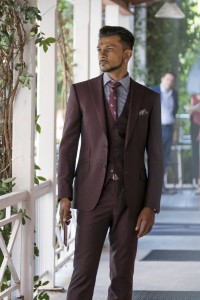 AX: So you worked in New York?

AMBUDKAR: I was in New York for ten years. I did the Off-Broadway thing and the theatre thing and the improv thing and the music thing, and now I’m in L.A., enjoying avocados like the rest of you.

AX: Does Malcolm evolve in any direction over the course of the episodes, or does he stay pretty much the same guy?

AMBUDKAR: I think he evolves in relation to our main character [played by] Jay, in the sense that all the career pratfalls that come with trying your very best to make it out of the bottom, to go from the bottom to the top – he sort of guides and also derails Jay’s career in many ways. So it’s an up and down rollercoaster in that regard.

AMBUDKAR: Yeah. There’s a movie coming out next year called BASMATI BLUES, with Brie Larson. There’s a movie next year called GAME OVER, MAN with Adam Devine, Anders Holm and Blake Anderson for Netflix, that’s coming next year. And then a TruTV documentary [which premiered in November] called THE PROBLEM WITH APU (about the character on THE SIMPSONS], which was made by Hari Kondabolu, who is a phenomenal standup comedian.

AMBUDKAR: I think WHITE FAMOUS is a comedy that’s going to bring up a lot of fun discussions about race and status in our country, and how we as people deal with that, and I think that the time is right for this type of exploration in a comedic way, and you’ll get to see me in a suit. I look very, very good in a tailored suit. That’s helpful for a man who’s worn sweatpants for his whole life, to have learned that about myself.

This interview was conducted during Showtime Networks’ portion of the Television Critics Association (TCA) press tour.