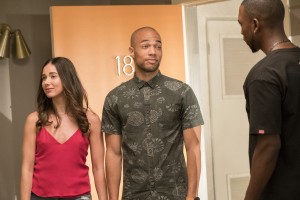 Showtime’s first-season comedy WHITE FAMOUS is loosely based on the life and career of one of its executive producers, Jamie Foxx. In WHITE FAMOUS, Jay Pharoah stars as stand-up comedian Floyd Mooney. Floyd is famous in the black community, but his non-black representatives are urging him to take acting roles so he can become “white famous.”

Kendrick Sampson plays British actor Robbie MacDonald, a possible Floyd rival, and Lyndon Smith plays Gwen, a possible Floyd romance. Sampson is a veteran of THE VAMPIRE DIARIES, GRACEPOINT, HOW TO GET AWAY WITH MURDER, is in the upcoming series RELATIONSHIP STATUS, and has a recurring role as a warlock on SUPERNATURAL. Smith has had arcs on THAT’S WHAT SHE SAID, 90210, PARENTHOOD, EXTANT and PUBLIC MORALS and is in the new season of CRAZY EX-GIRLFRIEND. Both are originally from the Gulf Coast – Sampson is from Texas, Smith is from Florida – and the two are hanging out together on the Paramount Studios lot, where Showtime Networks is throwing a party for the Summer 2017 Television Critics Association press tour.

ASSIGNMENT X: What can you tell me about your characters?

KENDRICK SAMPSON: My character Robbie MacDonald is a British actor who I think I can say is connected to Floyd’s ex and [Floyd’s] child’s mother [Sadie, played by Cleopatra Coleman]. He is now in a project with Floyd and there’s a lot of tension. 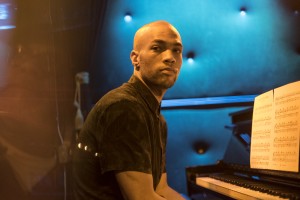 AX: Because Robbie is dating the ex?

LYNDON SMITH: It gets even juicier when I start dating Kendrick’s character, while he is simultaneously dating Cleo’s character. But when Floyd enters into this world of film and television and trying to become quote-unquote “white famous,” he boards the pilot, which I am his costar on, which then segues into another project that Kendrick is involved with.

AX: And can you talk about the meaning of the show’s title, WHITE FAMOUS?

SAMPSON: It’s actually a concept of being black and famous in the black community, and other communities not knowing you, especially white people. Like Jamie Foxx, when he was a comedian, he would walk through black communities or a black party or whatever, and he wouldn’t be able to stop without taking pictures and signing autographs. And then he could go into a white party or a white audience and no one would know who he was. In this, it’s kind of the same thing with Jay’s character, Floyd, and his sleazy agent has this thing where he wants him to become “white famous,” and not just famous in the black community, and Floyd’s struggle with that concept – “Should fame be based on whiteness? Should I aim for that? Why isn’t it okay to be famous in just the black community? And why isn’t it just called “fame”?

SMITH: Right. The specific question I think in Hollywood, because it seems like Hollywood still has a bit of segregation involved, are you famous in one community and not in another, and this show talks about transitioning between the two.

SAMPSON: Yeah. And of course, it has to do with opportunities for people of color, and if those opportunities are plentiful – which they’re not – and then not getting that chance to be “white famous,” quote-unquote, and famous in that white community, and being presented to those people. And if those people wouldn’t pay attention to the people of color that are put in those positions, then the obstacles that they face [to] becoming mainstream.

AX: Does your character Robbie care about that?

SAMPSON: That would be a decision that I would make myself. The writers have not addressed that for my character specifically, but he’s a little bit more concerned with the drama that is going on behind the scenes. He seems to be maybe a little more opportunistic, maybe.

AX: Since you’re both playing actors, are you basing your characters strictly on the script, or are you looking at any actors you’ve met or worked with and patterning anything after them?

SMITH: I’m looking at myself for the first couple years of my character in some way, because my character, I feel like she’s trying to figure it all out, and she’s making mistakes along the way, and I think she thinks she has a sense of self, but she’s still trying to find it, and that’s something I can relate to in my first year in L.A. and just trying to make it through this business. I’m six years in. I’m a little bit wiser now – not much more, but it’s something that I can definitely recall five years ago. “Yeah, I made that dumb mistake, maybe.” 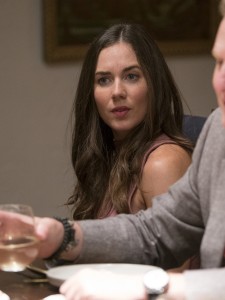 SAMPSON: I was cast very quickly, so I had to come up with this back story in my head, and I based it off of another show that I did, HOW TO GET AWAY WITH MURDER. Obviously, Viola [Davis] is the lead, and then Alfred Enoch is a British actor who would stay in character. He was playing an American character. So I based it off of him. He doesn’t know that [laughs]. It’s just like his back story [of playing another nationality]. It has nothing to do with my character’s personality and everything he got into, because I didn’t know anything about that.

SMITH: Can I talk about the British accent?

SMITH: [laughs] When I first met Kendrick, it was at a table read, where he was in character and he was speaking with a British accent. I thought that Kendrick was British. And so it’s not until the next day, when we’re in the hair and makeup trailer, he’s still in this British accent, but somebody tells me he is not in fact from England. He stays in it the whole time.

SAMPSON: I do. I have the next episode off, so I take a break, but when I have consecutive episodes, I have to stay in it so that it’s easier.

SMITH: I feel like I’m meeting you all over again tonight.

SAMPSON: A lot of people that I’ve met in these past couple months have been, “So you’re not British. Okay. That’s weird. Are you sure?”

AX: WHITE FAMOUS deals a lot with stand-up comedy. Do either of you have a background in stand-up?

SAMPSON: No, not even a little bit.

SAMPSON: This I think actually is my first comedy.

AX: How are you enjoying the half-hour form?

SMITH: Well, I love the five-day episodes. It’s a more laid-back work environment, I would say. You go to work and just laugh, you don’t have to make yourself cry all day. So I would sign up for this in the long run.

SAMPSON: Yeah. It’s a bit more chill. Everybody works really hard and everybody’s exhausted, but it’s still just so much less stress. And I think that also speaks to the people here.

SMITH: I feel like they’re trusting. They have cast the people that they wanted to cast, and they trust that you will show up on set, you’ll hit your mark and you’ll deliver the work, and I think they’re just trusting, and that creates a very easy work environment.

SAMPSON: They’re confident, and they foster an environment that you feel comfortable in, as opposed to some projects that foster an environment that you feel extremely stressed in, and they put a lot of pressure on the actor for social media and press and even being on set and acting, and I haven’t felt that once here. And everyone is so talented on this show.

SAMPSON: Everyone is hilarious and hardworking, like Jacob Ming-Trent [who plays Ron Balls], and Utkarsh [Ambudkar, who plays Malcolm], and Michael Rapaport –

SMITH: [Rapaport] is great. He recurs heavily. He plays the director for the pilot that I am doing with Jay Pharoah’s character. And he pops up throughout the whole season. He’s incredible.

SAMPSON: He’s hilarious. All of them are. Jay and all of his different impersonations – everyone is funny and hardworking. I love it.

SMITH: We have a good cast and we have an incredible creative team, so yeah, we think it’s going to be something special.

AX: How hands-on is Jamie Foxx as an executive producer?

SMITH: I think he’s a little bit more behind the scenes, I think he’s watching the episodes and giving advice from there, I know that he shows up in the pilot, but I haven’t seen him on set.

AX: And you’re on SUPERNATURAL. How long have you been involved with that?

SAMPSON: I was new as of last season [Season 12]. Last season, I was new. Me and Kara Royster play twins. My last episode was a crazy episode, where all of my family died and I was exhausted crying the entire episode, and to come back to this, I was like, it’s like a dream, compared to how much emotion I had to have for that.

SMITH: A lot of my family is from the South and the Midwest, and I always get the question of, “What is it like to be in Hollywood and be on the TV?” This show is kind of funny in that it shows Hollywood in a very caricaturized sense, and it shows just some of the funny types of people that you will meet along the way in the business. So I think it’s fun to see somebody from an audience standpoint, like Jay, navigate through this very crazy world.

SAMPSON: Yeah. And I think that hyper-reality – there’s so much truth in it, and it gives you a little taste of what it is to be here. It is bigger and more dramatic, but in some ways, it’s not. But for me particularly, I do a lot of activism within racial justice and I’m interested to see even the episodes that I haven’t been in, and see how Floyd, as a black man, especially a darker-skinned black man in Hollywood, navigates these issues in his personal and private life.

AX: Which groups are you involved with?

SAMPSON: I actually stay with my own activism. I’ve done things with Black Lives Matter, I went out to Standing Rock, I was involved with the Bernie Sanders campaign for a long time, and I still work with Our Revolution. I’m going to start working with Cut 50, Van Jones’ criminal justice reform. So there are several ones, but I make sure that, especially as an entertainer, I make sure that I’m not associated with any of those groups on a consistent basis, but I definitely collaborate with them a lot, and lend my voice as much as I can, and amplify the people that are actually doing the hard work, the everyday work, the work on the ground, and I try to get involved as much as I can going to the police commission meetings, holding people accountable, video-ing bad encounters that look questionable and posting things about the new Marijuana Justice Act that Cory Booker presented and how to reinvest in communities that have been hurt most by the war on drugs and talking about cutting federal funding from people that are from cities or districts that are disproportionately arresting people of color. That whole thing, I could talk about that all day.

SMITH: I’m not involved at all in the way that Kendrick is, but I admire the people who use their recognition in society for these causes, so I kind of stand in awe of him. He’s very much in it. He’s kind of an inspiration.

AX: And what would you like people to know about WHITE FAMOUS?

SAMPSON: Excuse my language, it’s f***ing hilarious. That’s what I would want people to know.