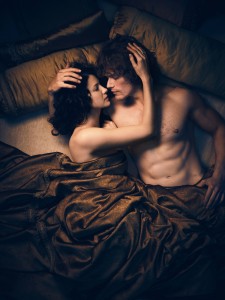 Season 3 of Starz’s OUTLANDER, which airs Sunday nights, shos off actress Caitriona Balfe’s versatility. Her character Claire, a twentieth-century combat nurse, has time-traveled to eighteenth-century Scotland, where she has met and fallen in love with Highlander Jamie Fraser (Sam Heughan). After a passionate marriage, the pregnant Claire was forced to return to her own time, while Jamie expected to die at the Battle of Culloden.

In Season 3, we see Claire age twenty years, from the 1940s to the 1960s. She gives birth to her and Jamie’s daughter Brianna (played as an adult by Sophie Skelton), loses her present-day husband Frank (Tobias Menzies) and learns that Jamie survived. Finally, Claire returns to Jamie in the mid-1800s. He has also aged twenty years. And then the couple wind up on a ship heading for Jamaica.

That’s quite a lot of change packed into one season. Balfe discusses this at a Q&A panel held by Starz for the Summer 2017 Television Critics Association press tour, then answers some follow-up questions in a private conversation at the Starz party later in the evening.

Asked about OUTLANDER’s broad appeal to many kinds of viewers, Balfe says, “One thing I think we’ve always said about our show is that the female character of Claire is sort of at the center, but it’s not just her. It’s the fully-formed characters of Jamie and Frank as well, and Black Jack. Whereas with some shows, maybe you have this central male character and then surrounding him are more two-dimensional versions of women, we’ve made all of our characters fully formed, and they all have great depth. So what you get is a great balanced look at relationships. And I think that’s why so many people relate to it and like to connect to it, because it’s giving you a realized version of people.

“I think the great gift of doing a series like this is also that you’re given time to really get to know your character, to really explore different elements. This season in particular, being able to create this woman over a certain period of time was really interesting, especially someone who, because of the loss of her love Jamie, has shelved a certain side of herself. And how does that experience wear on somebody? How does that change how they interact with people in their lives, with everything? And I loved being able to play that. Then, going forward, when she gets reunited with her love, how you unravel all of that, and how do you break down the walls that somebody’s built around their heart. That was a pretty unique thing to be able to play. I don’t know that you get the chance to do that over an extended period of time in many projects, and that was just a really interesting exercise.”

“Interesting” is one word to describe Balfe’s experience aboard the set for the Jamaica-bound ship. “We had one particular sequence of scenes where we were inside the set that’s on a gimbal [a machine that rotates and dips the floor] inside the studio. And it was about thirty-five, thirty-six degrees, and we had some fake vomit that needed to be made. But somebody somewhere made a decision that they would make it with milk. So it was made on a Friday. We started filming those scenes on a Monday, so it smelled a lot like real vomit. And you’re indoors, and the floor’s going like this,” Balfe indicates up-and-down movement, “and the smell was rather pungent. So it was challenging.” 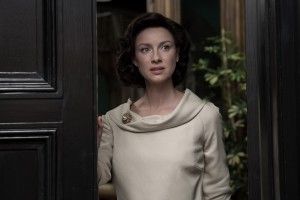 ASSIGNMENT X: How is playing Claire through her different ages this season?

CAITRIONA BALFE: I’m going to say Claire’s twenty years older than I actually am [laughs]. I think we all approach this from a place of, how does experience and how does time change you? In a certain way, last year at the end of Season 2, I had to start doing a lot of that work. And some of it was, I watched certain actresses. So I would watch an early [in the actress’ career] film and then watch a later film and see how people don’t change that much, but certain things change about them, or how they carry themselves. And a lot of it is also that people, the older they get, a lot of times, there’s just a certain gravitas or a certain authority that they gain through the fact that they’re more comfortable with themselves or they know themselves better. And I thought for Claire especially, someone who’s become a surgeon and all of that responsibility and all of that professional [achievement], getting to that place professionally, that would add this kind of authority to her. And so that was one of the things that I wanted to play with, rather than crow’s feet or a mono-brow. We thought about that, but we decided to go the other way.

AX: Did you have to learn anything for when Claire is a surgeon?

BALFE: Definitely. We have a scene inside the surgery, where she’s performing a surgery on someone’s liver. We had a surgeon there who was giving us advice, we had real O.R. nurses who were very strict about how things were done. So there was a lot of learning how to accept the instruments, what kind of way you would hold the instruments, what kind of language you would use, and that was all really exciting.

AX: The OUTLANDER costumes are always stunning, but it looked like the French costumes in Season 2 might be uncomfortable …

BALFE: It’s definitely easier to walk around in clothes from the twentieth century, but Terr [Dresbach, the costume designer] really outdid herself last year. Those costumes in the French part of the show were absolutely incredible and I think she deserved every accolade in town. I think it’s a bit more subdued this season. The ‘60s and the ‘50s and the ‘40s stuff is no less beautiful, it’s just a little less maybe dramatic.

AX: Is there any aspect of Claire that you’ve had any difficulty playing, or getting yourself into?

BALFE: No. I mean, I think the show always presents quite a few challenges, just in terms of, the material can sometimes be quite heavy. But I think the hardest thing was maybe to understand, or to find a way of understanding how someone could leave their daughter. That was really tough, but I think that Brianna gives her blessing and forces Claire in a way to go. That made it easier.

AX: And do you have a favorite iteration of Claire to play?

BALFE: Well, she’s always the same person to me, but I enjoy the costumes and the look of 1960 probably the most. But I also think being back in the 1700s is when I feel Claire is most herself, and when she has the most adventure, so that’s always the most fun stuff to play.

BALFE: Unfortunately, we have such a short window of hiatus for OUTLANDER], nothing has really worked out that fits inside the window, but I have a great day job, so that’s good.

BALFE: That it’s incredibly exciting, that it gives us a whole new look at these characters that they’ve grown to love over these two seasons. We’re going to take them on a really wild journey, and we hope that they’re excited about coming along for it.