The actor talks Jamie on the Starz series 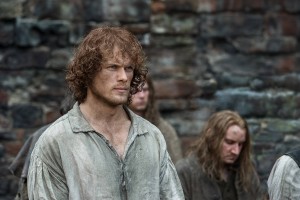 Starz’s series OUTLANDER, adapted by executive producer Ronald D. Moore from Diana Gabaldon’s best-selling novels, has its first-season finale Saturday, May 30 at 9 PM. The success of OUTLANDER has been such that renewal for a second season was assured pretty much by the time it premiered.

The season finale promises to be tense, with time-traveling WWII British Army nurse Claire, played by Caitriona Balfe, still in eighteenth-century Scotland, trying to rescue her Highlander husband Jamie, portrayed by Sam Heughan. Jamie is the prisoner of English garrison commander “Black Jack” Randall (Tobias Menzies), a sadist who intends to hang his captive – but first wants to brutalize him in other ways.

Heughan, who is from Dumfriesshire in Scotland, cordially talks about the second half of first season.

ASSIGNMENT X: It takes a while for Jamie and Claire to work out their relationship with one another as they’re being honest with each other and trying to reach a level of comfort with each other. How is it playing those scenes?

SAM HEUGHAN:  It’s wonderful. [Episode] 109, the first one back [after the midseason break], the scene by the river, Caitriona and I, we really relished that scene, we really tore each other to shreds. It almost got physical – in fact, I think it did a couple of times – but it was nice to finally let this relationship erupt. And ultimately, that’s what the rest of the season is about, it’s about them trying to get back to where they were, but so many things keep happening to them, so many scenarios and challenges, that they’re always battling to find their way back to each other and ultimately, I think it’s irreversible.

AX: Jamie has suffered a severe flogging before we ever meet him, and when his shirt is off, there’s a lot of scarring on his back. Can you talk about the prosthetic scarring on your back in those scenes?

HEUGHAN: Yes. It’s remarkable. We get it made in London. We have a full-body cast. Then, on our shooting day, it probably takes about two hours, maybe an hour-and-a-half. It did [originally] take upward of about three hours. We’ve got a fantastic makeup team, and they have got it down pretty quickly. It moves with the body. We [Heughan and Balfe] spend a lot of time rolling around on the floor, so it does get a little damaged, but so far, it’s held up well. In the second part of the show, Jamie goes through quite a lot of injuries, especially the last couple of episodes. And we have almost full-body prosthetics. It’s pretty crazy. And I think it’s going to look remarkable and be pretty shocking as well.

AX: Does the prosthetic protect your back at all?

HEUGHAN: No. The prosthetic is maybe a couple of millimeters thick.

AX: Seeing what Tobias Menzies gets to do in playing Black Jack, do you ever wish Jamie had a bad side for you to play?

HEUGHAN: Tobias gets to do some very bad stuff and I think that’s very exciting, but no, I think you see Jamie’s bad side – you see the man, that he’s not black and white, he has a lot of failings. He’s learning to get better, but he’s stubborn and he’s got pride and he’s got unfinished business with his father and his sister and he can’t back down from that. He’s certainly going to mix it up a bit and at the end, we basically see who Jamie is. Black Jack breaks him down so much that we see the very essence of Jamie and who he is, and ultimately [Jack] breaks him and I think that’s really interesting. So it’s been a really interesting journey. If Jamie had stayed where he was at the end of the first half of Season 1, he wouldn’t have been as interesting. He was very much on the periphery and was sort of an all-round good guy, but the culmination of the second half of the season, you see a different side to Jamie.

HEUGHAN: No, not at all. I mean, the stuff with Tobias, it’s kind of more than intimate and it’s quite shocking and very dark. They’ve both got their challenges, but that’s how we try to approach all those sort of scenes, even the spanking [of Claire by Jamie]. We discuss what we want to see, what we don’t want people to see, what it means to go to those places. They’ve both got their own challenges and they’re both with very little clothes on.

AX: Were there any moments that surprised you in the playing of them in either how they came out or how they felt?

HEUGHAN: It’s not what you think it is and it’s going to challenge you to watch it.

TCA 2011: Showtime says DEXTER has life beyond Season 6
Movie Review: PHILOMENA
GETTING ON with actress Niecy Nash - Exclusive Interview
DORKING OUT - Episode 42: The Let’s Pretend We Care About Sports Editi...