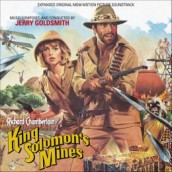 Jerry Goldsmith gives his Indy all for Alan Quatermain

They were musical equals in my opinion. Yet for the better part of the careers of John Williams and Jerry Goldsmith, it always seemed that the latter was chasing the coattails of the first when it came to picture quality. For if John got Irwin Allen’s THE TOWERING INFERNO, then Jerry received that producers’ dog called THE SWARM. While John flew with SUPERMAN, Jerry remained earthbound in the enjoyably silly company of SUPERGIRL. But perhaps no second-cousin removed picture that Goldsmith got to score was a ludicrously close to aping a way better picture than when it came to comparing 1985s KING SOLOMON’S MINES with another Spielberg-Williams adventurer that had hit the screens to way better effect five years earlier – even if Indiana Jones himself was certainly spun from H. Rider Haggard’s 1885 hero Alan Quatermain, who’d previous appeared onscreen in 1950. Valiantly stepping into Stewart Granger’s safari garb (sans Harrison Ford’s bullwhip) was Richard Chamberlain, a TV miniseries king not lacking for his own roguish charm. Heck, even Sallah showed up in this.

That the resulting spectacle represented Cannon in all of its major studio-wannabe gonzo excessiveness certainly didn’t prevent its star from having a good time, let alone Jerry Goldsmith in his quest to swing with equal orchestral panache over an alligator pit of John William’s cliffhanging motifs. Just how close he got in spirit to those snapping maws is just one of the reasons why KING SOLOMON’S MINES remains one of his most excessively enjoyable scores, as revisited in Quartet Records’ new two-CD set. Sure Jerry Goldsmith had more turkeys per quota than a composer of his talent deserved, but that didn’t mean he wasn’t going to give them his best. In the case of KING SOLOMON’S MINES he serves up all of his brassy action with a big, humorous wink.

Driven by a rollicking, nearly-shrill theme that screams manly period adventure, Goldsmith lets us know the big difference between this and RAIDERS is that J. Lee Thompson’s thrill-a-minute pastiche is set in Africa, as opposed to Indy’s Middle East, a continent that the composer happened to visit that year in BABY: SECERT OF THE LOST LEGEND (with the equally, enjoyably ludicrous “Congo” a decade away). The result is much tribal percussion (especially as its heroes are dropped into a now un-PC human boiling pot), charming mystery for far nicer upside-down natives, a nice, Marion-esque romantic theme and villainous, if not truly threatening brass for more German bad guys. Particularly fun is how Goldsmith frequently quotes from its Wagner-loving villain’s favorite hit “Ride of the Valkyries. The treasure within is some of Goldsmith’s most wonderfully frenzied action writing this side of TOTAL RECALL, long patches of non-stop, go-for-broke orchestral thrills and spills that leaves the listener breathless. In that respect, KING SOLOMON’S MINES truly nails the fun of Goldsmith’s cliffhanging thrills, as well as shows up his own personal Belloq for energetic fun. KING SOLOMON’S MINES has been popular enough to endure through many sold-out editions, but Quarter’s newly mastered release (along with Ennio Morricone’s score for Cannon’s other wannabe spectacle SAHARA) is the first to pair the complete score with Goldsmith’s original album presentation, abetted by an splashy booklet, whose entertaining liner notes by Jon Takis have a true appreciation of Jerry Goldsmith unleashed.

TV Review: BEING HUMAN - Season 2 - “Do You Really Want to Hurt Me?”
TCA 2012: Fox talks about the decision to renew FRINGE for a final sea...
BEST TIME EVER WITH NEIL PATRICK HARRIS: Neil Patrick Harris talks his...
Movie Review: THE INNOCENTS (DE USKYLDIGE)