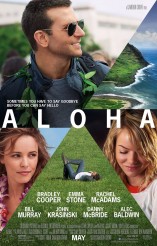 There are some really wonderful things in writer/director Cameron Crowe’s ALOHA that are balanced out by some things that are mundane or even baffling (why, if it is important to the story that a character named Allison Ng is one-quarter Hawaiian, cast an actress who looks four-quarters Nordic? If you want to use her, great, just say she grew up in Hawaii, but don’t insist on something that visually yanks us out of the film).

An element that is both good and bad in ALOHA is the way it plays its cards as close to its chest for as long as it does. When we meet ex-military/current private contractor Brian Gilcrest (Bradley Cooper), he’s coming to Hawaii to supervise the minor diplomatic matter of blessing a gate. Upon arrival, Brian is understandably thrown off his game by seeing his long-ago ex-girlfriend Tracy (Rachel McAdams), who is now married to Woody (John Krasinski), the Air Force pilot who just flew Brian over. Brian tries to be off-putting to his Air Force-assigned minder, up-and-coming pilot Allison Ng (Emma Stone, who is very good), but she is determined to be friendly and encouraging, no matter what.

At the same time, we find Brian grappling with wartime injuries that are both physical and emotional. He’s also on unsure footing with his boss, mercurial billionaire Carson Welch (Bill Murray), who is giving Brian a second chance after things went bad the last time they worked together.

ALOHA seems at first to be the Air Force equivalent of Crowe’s earlier JERRY MAGUIRE – a man tries to reinvent and redeem himself at the same time he discovers true love. The other plot, which would be the A story in another kind of movie, sneaks up on us in a way that is handled very well. The only caveat on that is it is so stealthy that we don’t have the time to invest in it as much as we might have otherwise.

The romance is a little rockier. When we find out what went wrong between Brian and Tracy, it’s more irritating than poignant. Allison is a paragon who, when she’s angry, yells at Brian about his wasted potential rather than her own feelings. This may crystallize our protagonist’s issues for those who haven’t been paying attention, but it doesn’t feel especially authentic. There’s also the issue of everyone who already knows Brian reacting to how “awful” he looks after all he’s been through, when so far as we can tell, he looks slim but healthy.

On the upside, Murray is beyond perfect as the turn-on-a-dime inventor/financier, and Crowe is onto something hilarious in the wordless communications between Brian and Woody. We also get a beginner’s guide to Hawaiian politics, with Nation of Hawai’i leader Dennis “Bumpy” Kanahele appearing charismatically as himself and articulating some complaints native Hawaiians have with mainlanders.

ALOHA is often surprising, sometimes fun and occasionally tone-deaf. If Cooper, Hawaii and/or slow-building thrillers appeal, then this is recommended despite its flaws.

TV Review: SUPERNATURAL – Season 9 – “Sharp Teeth”
Interview: Emily Deschanel gives the scoop on BONES Season 9
MAYANS M.C.: Clayton Cardenas gives the scoop on the SONS OF ANARCHY s...
WHAT WE DO IN THE SHADOWS: actor Harvey Guillen on Season 2 - Exclusiv...