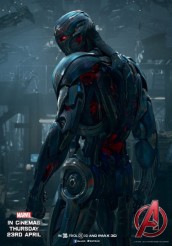 The assembled Avengers have a smashing new adventure 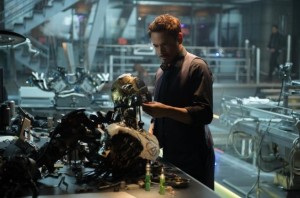 AVENGERS: AGE OF ULTRON is mostly what’s it should be and what’s expected – a superhero movie with slam-bang action, engaging characters, snappy dialogue and the fate of the world in the balance. Joss Whedon, who wrote and directed the first AVENGERS, capably returns in both capacities here. Fans of the filmmaker will see plenty of his sensibility, including very detailed character concerns about personal responsibility and involvement with civilian safety as the battles escalate, figuratively and literally (events start getting vertical at a certain point).

In what won’t be a spoiler to anyone who has seen the trailer and/or knows how to parse the film’s title, Tony Stark aka Iron Man (Robert Downey Jr.) has suffered through fending off an alien invasion, which is one too many alien invasions for him. Without telling his fellow Avengers, who have all gotten together to dispatch another enemy, Tony creates Ultron (voiced by James Spader), an artificial intelligence designed to protect Earth from outside threats. However, Ultron quickly decides that what Earth really needs is for humanity to evolve, which may require that it first disappear. Good thing Dr. Bruce Banner aka the Hulk (Mark Ruffalo), Steve Rogers aka Captain America (Chris Evans), Natasha Romanoff aka Black Widow (Scarlett Johansson) and Clint Barton aka Hawkeye (Jeremy Renner) all stick around for what was supposed to be Thor’s (Chris Hemsworth) going-back-to-Asgard party. The event quickly turns into Round One of the Avengers vs. Ultron. There’s also the matter of “enhanced” twins Pietro (Aaron Taylor-Johnson) and Wanda Maximoff (Elizabeth Olsen), each with different remarkable powers and both with enormous anger towards one of the Avengers.

Ultron, with a persona crafted both by Spader and Whedon, is a beguiling villain, quirky and unsettling at the same time. However, because his mind jumps around so much, it doesn’t seem like he’s got a fully-thought-out plan for destruction. There’s something poetic about Ultron’s flitting, ever-learning mental processes – he loves the big picture of creation and extinction – but this also makes him seem a little less invincible.

This may not really be the point, as there’s an underlying mood here that will be recognizable to anyone who has suffered from a particular type of anxiety dream. In Tony Stark’s case, trying to save everyone backfires spectacularly, and Bruce Banner is only useful as a superhero when he’s so out of control that he may do as much harm as good. Even for the other superheroes , reaching out here to save this person may mean you don’t have an arm free to save that person. Doing nothing isn’t really an option, but taking action means you can get people killed. In some movies in the genre, nobody seems to notice, but here, it’s the philosophical crux of the piece. As for action standouts, take your pick – everything is spectacular and almost always one or two steps ahead of the viewer.

There is a lot of fun to be had here by simply hanging out with and listening to the byplay between characters who all feel like old friends by now. It feels like the film desires to spend more time with them than is available between the big set pieces – we certainly do – but what we get is very enjoyable. Downey’s mercurial Stark remains first among equals in terms of focus, but most of the other characters get their due, and some matters concerning the non-superpowered team members are given long-awaited discussion. It’s also great to see Marvel Universe stalwart Paul Bettany at last get some screen time, and Andy Serkis, credited as a motion consultant, shows up in a supporting role.

There are a couple of plot points that get zipped past too quickly for comprehension – for someone who says he’s “not the director of anything,” Nick Fury (Samuel L. Jackson) sure still seems to have a lot of clout, there appears to be some retcon involving just what the public has seen earlier of one character and there are decisions made about a “safe house” that would seem to render it less so – but they’re not enough to trip up plot logic.

There is a slightly stronger sense of franchise than usual in AVENGERS: AGE OF ULTRON. It is self-contained in a way that makes it simultaneously new-viewer-safe and a bit episodic. Characters certainly go through huge emotions and realizations, but there’s nothing that makes us wonder how they’ll cope after what’s happened here. The movie embodies what we want in a Marvel film – it’s smart, cool, full of vivid stunts and effects with well-delineated characters played by top actors. If it doesn’t feel like a pivot point, neither does it feel like a bridge designed solely to get us from Film A to Film C.