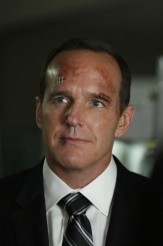 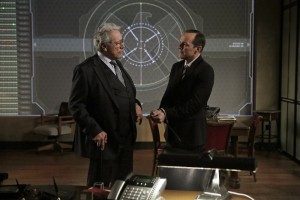 In Season 2 of MARVEL’S AGENTS OF SHIELD, ABC Tuesdays at 9 PM, Clark Gregg’s character Phil Coulson has been having quite a time of it. Sure, former S.H.I.E.L.D. boss Nick Fury (Samuel L. Jackson) did make Coulson the new director of S.H.I.E.L.D. at the end of last season, but not before bringing Coulson back from the dead with alien DNA. This season, Coulson has had to cope with the alien DNA causing him to uncontrollably draw maps that turned out to lead to an alien-built city. One of his agents, protégé Skye (Chloe Bennet), turns out to have her own alien DNA, which has manifested in her sudden ability to cause earthquakes. Another agent, the well-liked Tripp (B.J. Britt), was killed protecting Skye. Skye’s crazy dad Cal (Kyle MacLachlan) is jealous of Coulson for being a father figure to the young woman and furious because Coulson killed somebody Cal wanted to rip apart on his own. Then there’s the fact that there’s another segment of S.H.I.E.L.D. questioning Coulson’s legitimacy as leader. It’s a lot for one man to bear.

As the actor playing that man, however, Gregg sounds very happy to be playing everything the writers throw at him. Gregg created the role of Coulson in IRON MAN and has reprised him number of times on the big screen, the last time in the first AVENGERS film where Coulson died (temporarily, as it turned out). Since then, Gregg wrote, directed and starred in the feature TRUST ME, played Leonato in AVENGERS writer/director/AGENTS OF SHIELD co-creator Joss Whedon’s film of Shakespeare’s MUCH ADO ABOUT NOTHING and appears in the film THE THRILLING ADVENTURE HOUR LIVE.

AX: AGENTS OF SHIELD had quite a dramatic Season 2 midseason finale …

CLARK GREGG: I thought so. We lost Agent Triplett, that was brutal, the most popular actor on our set, B.J. Britt. I’ve never had anyone get more goodbye parties ever in my life, and deservedly so. I threw most of them. We love this guy so much. So everyone’s kind of heartbroken in the cast and the characters in the show are a little messed up by this. And meantime, Skye has been turned into something and we don’t quite know what. These characters don’t read the comics, so they don’t know that she’s Daisy Johnson. They just know something has happened and a lot of rumbling is happening around them.

AX: Without getting too spoilerish, does Skye’s dad’s disappointment with not getting to kill Whitehall factor into Coulson’s future dealings with him?

GREGG: Absolutely. This is not the kind of guy you want to have angry at you. And yet Coulson’s pretty upset with him, because he’s put the person Coulson cares most about in danger by getting her there and effecting this transformation, so if anything, the stakes in their next conflicts, because they’ve already slugged it out pretty good, I think are going to be a little gnarlier.

AX: Now that they’ve found the alien city that it turns out Coulson was sketching maps of, is Coulson done sketching things, or will he have something new to sketch, or some other manifestation of that alien DNA transfusion?

GREGG: It seems like that craving was satisfied, the hypographia, but it’s hard to know. This alien blood inside of you acts like one of these parasitic insects that makes you build a nest for them. There are those on the team who feel like Coulson’s actions are being driven by something beyond his control.

AX:  Scheduling-wise, how did you work in your movie TRUST ME between all of the Marvel projects and MUCH ADO?

GREGG: I shot MUCH ADO right after we finished filming the first AVENGERS, literally, like three weeks later, we shot it at Joss’ house. And TRUST ME I shot after Coulson had been killed in THE AVENGERS and after THE AVENGERS came out. So that following late summer/early fall. And while I was shooting it, I got the call from Joss saying, “We want to bring Coulson back to life.”

AX: Did that in any way influence your attitude while making TRUST ME? That is, did you start TRUST ME feeling sort of matter of fact, fatalistic that the Marvel gig was over, and suddenly you were back with Marvel and happy about that – was that reflected in your work on TRUST ME?

AX: Now that you’ve got your own show, does that allow you to feel more confident in your filmmaking ambitions, as far as, “Maybe I don’t have to fight so tooth and nail for funding on the next one?”

GREGG: I’d like to think that, but I see so many people who are much more well-known than I struggling so hard to find funding for independent films right now, it seems like right now is a time when it’s much easier to get a cool cable show off the ground than it is to make a simple little one- or two-million-dollar independent film.

AX: Do you want to make a cool cable show, or are you figuring you’ll worry about that once you’re done with AGENTS OF SHIELD? 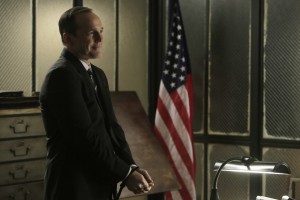 GREGG: There’s something that I’m working on that I think would fit well into that model, but I probably will have to wait until after AGENTS OF SHIELD. So I probably will end up throwing everything I have into making another independent film on my break.

AX: Now that you’re doing Season 2, do you have any kind of a different attitude toward being Number One on the call sheet and playing somebody who is the head of the organization than you did at the outset of Season 1?

GREGG: I have a lot more respect for the amount of work that goes into doing that well. And also, last year was really hard that way – the endurance factor of trying to deliver what I consider to be a sufficient level of preparation every day. This year, just adding a couple of new team members – Adrienne Palicki [who plays Agent Bobbi Morse], the amazing actors we brought on, Henry Simmons [who plays Agent “Mack” Mackenzie], Kyle MacLachlan, Nick Blood [who plays Agent Lance Hunter] – that has gone a long way. It’s kind of taken my hours back just ten percent, and that’s made my life a lot easier.

AX: Do you have a favorite episode or scene in the first season and a half of AGENTS OF SHIELD?

GREGG: Okay, there’s one in the first season, which is, I love when Nick Fury shows up and brings me my gun from THE AVENGERS – that’s pretty spectacular and helps me get out of a jam – and makes me head of S.H.I.E.L.D. That was a great episode for me. This season, there’s the episode where Coulson gets to the bottom of the hypographia, the crazed alien writing, and finds out more about what happened in the T.A.H.I.T.I. Project. That was a really amazing episode to shoot.

GREGG: No, I don’t. My plate is completely full with AGENTS OF SHIELD right now.

AX: What would you most like people to know about Part Two of AGENTS OF SHIELD Season 2?

GREGG: I think people think that the revelation of Skye’s character as Daisy Johnson/Quake, a possible member of the Inhumans, is the big reveal, but just knowing my writers, I think there are some big surprises still to come.

This interview was conducted at ABC’s party for the Television Critics Association at Pasadena’s Langham-Huntington Hotel.