TV Review: MARVEL’S AGENTS OF SHIELD – Season 2 – “A Hen in the Wolf House” 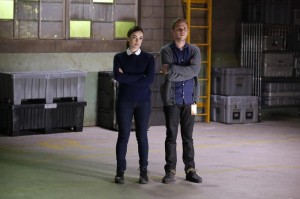 If this show needed a strong female character that isn’t wrapped up in daddy issues or constantly pining for her boss to get back to being the old guy she used to know it is MARVEL’S AGENTS OF SHIELD.

Palicki, for those uninitiated, is hot-as-balls. She was originally found in the great NBC series FRIDAY NIGHT LIGHTS and has gone on to have a pretty successful career in a handful of movies and was even once going to star as WONDER WOMAN in a television series but it got sh**canned.

On AOS, she immediately established herself as a strong presence and she just debuted in “A Hen in the Wolf House” by taking out a slew of Hydra agents in saving Simmons (Elizabeth Henstridge) after she is outted as a double agent. Also, her character of Bobbi Morse has strong ties to not only the Marvel universe but the Avengers as well. Her superhero call sign is Mockingbird (at least in the comics) and has been a part of the Avengers numerous times – dying once but it was really just a Skrull and also being married to Hawkeye (Jeremy Renner in the movies). The cool thing about Mockingbird is that she has no said powers. She’s more of a Hawkeye superhero or Black Widow, using her natural ass-kicking abilities compared to super strength from gamma radiation or super strength from being a Norse God or a suit of armor. In essence, she fits well with the other characters on the show.

Now, her presence may be a good or bad thing. On one hand, what this show has sorely missed is the actual superhero element – luckily this seems to be changing post CAPTAIN AMERICA: THE WINTER SOLDIER with bad guys with powers showing up more and more (and with The Absorbing Man being introduced on AOS this season). However on the other hand, having a Black Widow type character would be a nice addition since Ward (Brett Dalton) is sitting in a holding cell in a Shield basement. Yes, they have Agent May (Ming-Na Wen), but lately she has taken a back seat to ass kicking in favor of petting Agent Coulson (Clark Gregg) and his craziness involving the alien technology that’s filled in his noggin.

It also opens up a slew of opportunities for Palicki to have a larger role in the Marvel universe as a whole. She could show up as a character in the next Captain America film given her strong ties to several of the characters involved and being a part of Shield. She could join the Avengers if the rumors are true that they plan to mix up the members in the third movie. But overall Mockingbird gives a strong tie-in to the show to the rest of the Marvel universe or at least potentially.

As far as this episode goes, it was actually pretty decent. The Hydra/Simmons sub plot gets wrapped up after Raina (Ruth Negga) decides to show Hydra her personal dirty laundry with communicating with Shield because she wants Coulson and crew to turn over Skye (Chloe Bennett) to her so she can get Skye’s father, The Doctor (Kyle MacLachlan), to turn over the Obelisk over to Hydra. Lots of moving parts but it makes sense in some regard. The Doctor wants to meet his daughter, Hydra wants the Obelisk, Shield isn’t willing to let Skye go. This later comes to a head when The Doctor strolls into Hydra HQ and delivers the supernatural device in exchange for the death of Coulson – who The Doctor sees as turning his daughter against him.

Overall, the second season is definitely better than the first half of the first season in so many ways and hopefully this momentum will continue in future episodes.