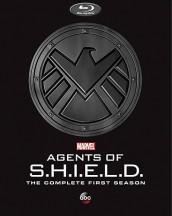 It took over half of season to really find itself, but for some it might have too late.

One of the most disappointing things Marvel has done in its bid for superhero dominance is the creation of MARVEL’S AGENTS OF S.H.I.E.L.D. – an ABC TV series that should have been better than it actually was. Now it’s out on DVD and Blu-ray as THE COMPLETE FIRST SEASON for the binge-viewers out there.

And considering Joss Whedon, who wrote and directed THE AVENGERS, was at the helm and co-created the series with Jed Whedon and Maurissa Tacharoen, it really was hard watching this Marvel movie universe off shoot flounder for a good portion of the first season.

The premise had me from the get-go – Agent Coulson (Clark Gregg) somehow survived his death in THE AVENGERS and is secretly commanding a team of S.H.I.E.L.D. agents in the art of, well,  janitorial skills?!?

Yes, the first half of the season found the characters essentially cleaning up bigger messes but rarely getting into major action. Call it THE JANITORS OF S.H.I.E.L.D. and maybe I would have respected it more.

Some familiar faces from the movie universe show up, most notable Samuel L. Jackson as Nick Fury (a huge, and very welcome surprise), Agent Maria Hill (Cobie Smulders) and Lady Sif (Jamie Alexander) from the THOR movies. Their addition definitely emphasizes that this isn’t just a bland TV offshoot. If only there were more cameos and more of an emphasis on a broader universe.

While the first half really blew in many ways, the second half of the season started to gain momentum with the release of CAPTAIN AMERICA: THE WINTER SOLDIER. This is where the series rather brilliantly found its footing and Marvel kicked all the naysayers in the head with a great twist. S.H.I.E.L.D. has been destroyed because HYDRA has infiltrated it. Allies are actually enemies, and that’s no different when one of the most bland characters of the team turns out to be a traitor.

The second half of the season filled with one great episode after another – kicking into the rich, layered mythology that the movies showcase. If only this revelation happened early, which has made many people wonder if the series should have been a 13-episode mid-season replacement so it could have started strong and stayed strong.

Many Joss Whedon alums pop up throughout Season 1 including ANGEL‘s  Amy Acker as the mysterious Cellist referred to in the IRON MAN movies (she’s Coulson’s lady love) and ANGEL’S J. August Richards who eventually becomes Deathlok.

More should have been done with Coulson and the explanation as to why he survived, but the pay-off later in the season is ample enough to make it worth the wait.

The Special Features include behind the scenes featurettes, commentary, gag reel and deleted scenes

I wish I could say the whole series was worth watching, but the good part about the First Season set is you can skip ahead if you want to the good stuff since you won’t be missing much in the process.

Plus, Marvel has faithfully adhered to events happening in the movie universe as it pertains to the TV show (something DC has decided not to do with it’s JUSTICE LEAGUE movies and its successful CW series ARROW and THE FLASH). The good news is THE AVENGERS: AGE OF ULTRON is upon us on May 1, which allows for Season 2 of AGENTS OF S.H.I.E.L.D. to pay-off events in that film as well.

Never has the theatrical experience tied in so directly to the TV universe in this way. And if the latter half of AGENTS OF S.H.I.E.L.D. is any indication, Season 2 could very well blow it out of the water (and so far it has). With the potential for clearer focus and a more streamlined storyline (the Agents of S.H.I.E.L.D. are now fugitives and still working toward a greater goal), the show that shed fans very quickly could soon have loyal viewers coming back in droves.