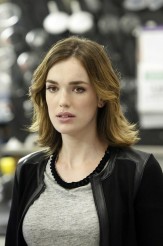 The actress talks Simmons' feelings towards Fitz and more 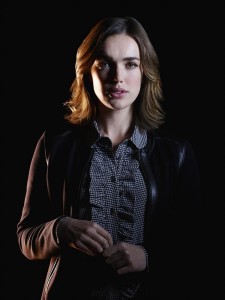 In ABC’s MARVEL’S AGENTS OF SHIELD, now in its second season Tuesday nights at 9, a lot has changed since the series began its first year. The show, adapted by Joss Whedon & Jed Whedon & Maurissa Tancharoen from the Marvel comics, is intimately tied in with the Marvel film universe, so when Hydra agents emerged to wreak havoc with S.H.I.E.L.D. from within during the big screen’s CAPTAIN AMERICA: THE WINTER SOLDIER, all hell immediately also broke loose on AGENTS.

In the aftermath, it turned out that team member Grant Ward (Brett Dalton) was a Hydra mole. Team chief Phil Coulson (Clark Gregg) was promoted to director of what was left of S.H.I.E.L.D. by former director Nick Fury (Samuel L. Jackson, making a TV appearance). The previously inseparable scientific team of Leo Fitz, played by Iain de Caestecker, and Jemma Simmons, played by Elizabeth Henstridge, was challenged first by thinking they were about to die in a submerged sphere beneath the ocean. Fitz professed his love for Simmons, then came up with a plan that would save her at his expense. Simmons said she couldn’t live without Fitz. Then Fury rescued them both, but we learn in Season 2 that Fitz has suffered some brain damage as a result. He now hallucinates Simmons, who isn’t really there – because she’s off on an undercover assignment, infiltrating Hydra by pretending to have joined their science division.

Henstridge, the young English actress who has her first series regular role in Simmons, is at an event that Disney and Marvel are holding on the Burbank Disney lot for AGENTS OF SHIELD. She takes some time to say what she can about her secret agent duties.

ASSIGNMENT X: You were all sworn to secrecy about the Hydra plotline until CAPTAIN AMERICA: THE WINTER SOLDIER was released in April. Was it doubly difficult doing publicity for your first TV series and being unable to talk about where half of the show would be going for most of Season 1?

AX: How surprised were you by Hydra destroying so much of S.H.I.E.L.D. from within? Were you ever worried that Simmons might turn out to be the Hydra agent?

HENSTRIDGE: I mean, listen, any of us could be. That whole twist was amazing, I must say. None of us had any idea it was coming, so for Brett Dalton, as a human, as an actor, as an artist, I was so excited for him, because that’s such a great gift, to say, “Hey, this character you thought you knew? Guess what, you’re going to get to know him all over again.” That’s very exciting as an actor. As a lover of Ward, I was crushed that he was not what we thought he was. So none of us know what could happen to our characters. That’s a huge gift as an actor. So just go with the flow.

AX: What are Simmons’ feelings towards Fitz, at least during and after that scene1? Is she discovering something new about her feelings, does she just feel very strongly towards him as a friend, or …?

HENSTRIDGE: It came out of the blue for her. It was not on her radar. So that’s something that they now will have to deal with. She didn’t really have those feelings. Whether she kind of discovers that she has them now, or whether it’s purely platonic for her remains to be seen. But certainly in that moment, that was total shock. She still cares greatly for Fitz, and he is so important in her life. They just have to figure out – or not – where their relationship goes from here.

AX: Do you have a favorite episode or a favorite scene from Season 1?

HENSTRIDGE: My favorite – I think it’s Episode Two, where we’re all sitting on the back of the plane and watching [an explosion] and it’s this big fireworks show. We’re sitting on the back of the bus, just drinking beer, and that’s always stuck in my head, because I think it’s the first that all of us as actors – that was obviously the first episode we filmed after the pilot, that was when we knew that we were going to get at least seven [episodes], and for the characters, it was them sitting and bonding. That sticks out in my mind, but so many – all the fight scenes, the car chases, when Clark and Skye fly in Lola. There are so many great ones. 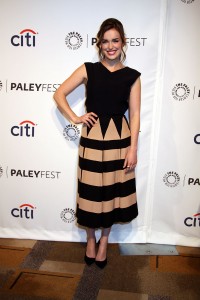 AX: Speaking of the action scenes, how was being on the flying rig when Simmons jumped out of the plane in “F.Z.Z.T.”?

HENSTRIDGE: It was really fun. It’s funny, because for those things, you get stunt doubles, and my stunt double is amazing and she doesn’t ever really get to do very much, so she was excited. They put you all in and they’re obviously very safety-conscious, which everybody has to be, and it feels very safe. So I’d be up on the rig for ten, maybe fifteen minutes, and then you get all these people coming round, asking if you’re okay, if you’re all right, if you can walk, whatever, and then the stunt double gets up there, she’ll be up there for hours, and I feel so bad [laughs], I’d be going over and asking if she needs water. They’re so tough – nothing really fazes stunt people. So yeah, it was really fun. It’s always interesting how things come together, because you film it against green-screen and then you have no idea how it’s going to come out.

AX: How do you enjoy the Twitter interaction with the fandom?

HENSTRIDGE: It’s great. I mean, I’m not the best with technology, so it’s definitely a conscious effort to Tweet, but it’s wonderful. It’s so nice to get that instant interaction with them, and how they’re feeling about the episode. The Whedonites were something that I was a little bit – “anxious” isn’t the right word, but I treated it with slight trepidation, because I didn’t know if we would be accepted or what the reaction would be. Fans of Marvel and Joss Whedon, they know their stuff, and so if you don’t bring it, then they’re going to tell you. But the whole way through, they’ve just been so lovely. Even if people don’t like something, it’s always in a constructive way and it’s always a conversation and I enjoy critiques, so that acceptance has definitely been a wonderful thing for us. 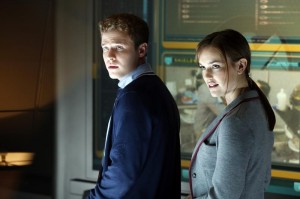 AX: And what should we most know going forward into AGENTS OF SHIELD Season 2?

HENSTRIDGE: How much we don’t know about S.H.I.E.L.D. and what that means. Because now we’ve got to rebuild S.H.I.E.L.D. So in a way, none of us know anything [laughs].