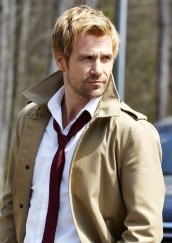 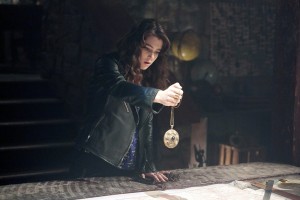 So CONSTANTINE’s premiere episode isn’t entitled “Pilot” for the reason that the Pilot episode is something completely different than what was delivered in “Non Est Asylum.”

Hopefully, for the better. CONSTANTINE is based on the comic book HELLBLAZER (that also spawned a movie of the same name starring Keanu Reeves) about John Constantine, a damned demon hunter and master of the occult that fights against the forces of darkness to help the innocent. Well, at least on paper that’s what he is supposed to do, what happens is not always that black and white.

Regardless, the NBC series has Matt Ryan in the lead role and he seems to do a serviceable job in the role with enough pompousness and craziness to play off the character that is always on the fence between sanity and the mental ward. In fact, the opening episode has Constantine in a mental institution having checked himself in after he failed to save a little girl’s soul from going to hell.

Now, Constantine is on a path to save as many souls as he can before his own is called before the master of darkness to go to hell himself (something about having sold it in order to save the little girl but it went bad and the girl and his soul were lost). In the opening episode we are introduced to Liv Aberdine (Lucy Griffiths) that is the descendent of one of Constantine’s old partners  and who discovers she has the powers to see tortured souls still on Earth as well as possible demon incursions that are going to happen in the future.

The episode mostly centers on Constantine saving the girl but also convincing her to dig a hole as far as she can and hid from the powers that are trying to hunt her because of her ancestry. So that’s exactly what she does but not before mapping out a huge laundry list of demon incursions on a map for Constantine to follow and help out before something bad happens.

Sound familiar? A tortured demon hunter traveling from place to place and helping the innocent from big, bad demons from Hell while having nit-picky and troublesome angels looking over his shoulder trying to poke him in a right direction? Yeah, Constantine is Dean Winchester right down to the quips and one-liners he delivers. Now, who will be the Sam Winchester in this equation? She gets introduced next episode in Zed Martin (Angelica Celaya), a woman that will accompany him on the journey that is no doubt more serious and may have some sort of demon/angelic powers.

Now, comparing this SUPERNATURAL is not a bad thing. In fact, it is a complement in my eyes because look how long that show has been on the air and the fans that show has. It is impressive the longevity of the series has and if CONSTANTINE could have a fraction of that success it would be a big win for NBC. Plus, there is nothing saying that a show that involves demons and angels can’t borrow some of the same plot points as another as long as the storylines are good and the mythology is different enough to make people care about the show.

Given that David S. Goyer (writer of Nolen’s BATMAN trilogy and MAN OF STEEL) is one of the creators and wrote this episode gives me hope that we could have a pretty good series here, if NBC gives it enough time to mature and establish itself.