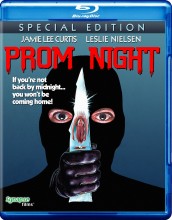 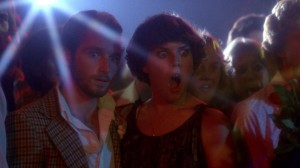 The 1980 slasher film PROM NIGHT is not a perfect movie by any means. In fact, many late 1970s and early 1980s horror films so dearly missed the mark, they’re better off not being remembered.

PROM NIGHT stands somewhere in the middle. One of many slasher knock-offs to feature HALLOWEEN star Jamie Lee Curtis, the other was 1980’s TERROR TRAIN and strangely both contain many of the same problems – and strangely also provide a not-so-satisfying nor surprising final twist.

PROM NIGHT’s biggest issue is its momentum. It starts off strong, ends strong, but there’s a long stretch of about 45 minutes in the middle where things seem to literally go nowhere. In fact, I would call this the only disco horror movie ever made, because it feels like someone was so in love with disco, that they had to spend at least 10 minutes fawning over the dance scenes as if this was a SATURDAY NIGHT FEVER rip-off and not a HALLOWEEN knock-off.

The story begins in flashback when a young girl named Robin is tormented by four other younger kids – with Robin accidentally being killed. The foursome promise to never talk about what happened again. Then, ten years later while they’re about to attend their high school prom, a killer decides to off them one by one for their past sins. 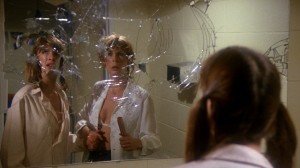 After a long build-up, the kids start getting picked off, some in gruesome fashion, as the police try to zero in on whom they suspect might be the killer (but any horror fan can spot this red herring right off the bat).

While PROM NIGHT could have used more scares and suspense, director Paul Lynch does manage to put together a nearly ten minute stalk and chase sequence that’s quite impressive. It builds and builds with great tension and even though it features a character we don’t particular like, you end up really siding with her by the time the sequence is over. If only the rest of PROM NIGHT was this well crafted, it might have stood the test of time a little better.

Of course that one sequence does not make up for a completely ridiculous sequence where the killer tries to kill a guy driving a van doing donuts before the van drives off a cliff and explodes. Yes, that does happen.

Overall, PROM NIGHT has some solid acting including Curtis and Joy Thompson as the bubbly Jude. The weirdest part of watching this film now is actually Nielsen. He was known as a serious actor before he did the AIRPLANE! movies and spent the latter part of his career doing comedies. And this film was right before the middle of AIRPLANE!, but even though he’s playing things straight, you can’t help but want someone to call him Shirley.

PROM NIGHT has a spotty DVD history. Anchor Bay released an okay version of it in the late 1990s, but since then it’s been treated pretty shabbily. Thank goodness for Synapse Films which has rescued this film from the portly transferred crap heap and given it a brand new high-def transfer from the original film negative.

It makes a world of difference too. After watching PROM NIGHT, I plopped in my old Anchor Bay disc and it’s night and day. The Anchor Bay transfer, before the concept of High-Def, is dark, muddy and makes the film look really cheap and crappy.

Compare that to the Synapse Blu-ray and it’s like watching a completely different movie. The colors pop, the film comes across stylish at times with its look and feel. You really get sucked up into the film and find new things to appreciate. The fast paced cutting in the early scenes when the killer starts calling his potential victims is top-notch. It really sets a nice tone – and is quite imaginative and daring for a 1980s slasher film. The night scenes are also crisp and sharp. The movie has been cleaned up so much, it really feels like you’re watching the film for the first time with fresh eyes.

PROM NIGHT does have this weird hazy camera work from Robert C. New  – all the lights are diffused and it definitely is a style choice. It made the film look strange in the Anchor Bay cut, but on high-def, it just gives the film a little more class.

Synapse also provides some great bonus features – the first time ever for a PROM NIGHT release (you only got a trailer on the Anchor Bay disc). There’s commentary with director Paul Lynch and screenwriter William Gray, a lengthy making of documentary featuring director Lynch and some of the secondary cast (sorry, no Jamie Lee Curtis – real bummer), a motion still gallery of posters and photographs from the set, a trailer and television spots as well.

Another great addition is a whole bunch of outtakes from the original shooting. It’s interesting to watch these lengthy takes to see the movie slowly coming together before your eyes. This featurette is exclusive to the Blu-ray.

Also interesting is around eight minutes of scenes included in the television broadcast. There’s a brief introduction explaining why the footage was added to TV and  it’s obvious all this stuff is filler. There’s nothing new or revelatory pertaining to the plot and most of the outtakes feature Nielsen – and are somewhat comedic in nature. They were good omissions from the final theatrical film.

Synapse has also put together a brand new 5:1 sound mix for this release while also including the original 2.0 mono track.

It’s amazing that the horror movies from the 1970s and 1980s are finally getting their long overdue prestige treatment (from companies like Synapse, Shout! Factory, Blue Underground and Anchor Bay). There is an audience for these movies, and with each new transfer and restoration, these films seem to be getting better and better. There was some artistry involved, even in the films that don’t quite hold together as well as they should.

In PROM NIGHT’s case, it sheds new light on a lesser slasher movie and through that process, you realize the film is far better than it’s given credit for. Again, it’s not a perfect film by any means, but it’s better than the average slasher and kudos for Synapse for giving this film a second lease on the cult afterlife.