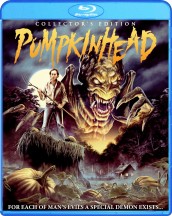 PUMPKINHEAD has always been one of those odd horror films that defies categorization. It’s an original concept, has a great lead creature, a unique premise yet, when all is said and done, never truly achieves the greatness its premise promises.

After watching the Collector’s Edition of the 1988 film from Shout! Factory, I was hoping that the film was better than I remembered, but unfortunately it isn’t.

It’s still good, mind you, but for every great idea and moment, the film also gets bogged down in traditional “let’s slay all the teenagers” trappings as well.

The story begins with an explanation of a vengeance demon called Pumpkinhead. You call on it, and it will do the damage to your enemies until all of them are dead. A young Ed Harley witnesses this as a child and never forgets it when he himself grows up. A widowed father, the adult Harley (Lance Henriksen) has young son Billy (Matthew Hurley) who helps him take care of his shop on a lazy road out in the middle of nowhere.

When a group of annoying thrill seeking teenagers show up, their negligence results in the death of Billy. Grief striken, he reaches out to an old witch who helps him resurrect Pumpkinhead.

Revenge follows, though one big question: Harley’s dog is just as much to blame as the kids for Billy’s death, so why didn’t Pumpkinhead dispatch the dog too?

The late FX maestro Stan Winston made his feature directorial debut with this movie (he also helped with the story and his shop created the titular creature) and his understanding of make-up effects are what bring this creation truly to life.

When Pumpkinhead is on screen, the movie is glorious and manages to create a menacing fairy tale atmosphere. From the scares to the gore, this is an impressive character that deserves a slightly better script. Mixing in elements of DELIVERANCE, PET SEMATARY and every single slasher movie from the 1980s, it’s a grab bag of ideas, and it works some of the time.

Henriksen is fantastic as Harley, especially with the scenes with his young son early on. Understated and real, it sets the movie off on the right track.

If anything, the mythology of Pumpkinhead becomes a little muddied. As it readies for a big twist at the end, these machinations take away from the threat of Pumpkinhead somewhat.

The special features are plentiful, including a massive documentary featuring the cast and crew, isolated featurettes on some of the actors and trailers and stills.

Even though there is some archival footage, it truly is a shame an archival Winston interview couldn’t have been dug up. It would have wrapped the special feaures up in a nice bow. Yes, there is a remembrance of him on the making of, but you really wish more of his presence could have been felt.

While none of the subsequent PUMPKINHEAD sequels lived up to the eerie magic of the original, it is nice that the film finally gets an excellent Collector’s Edition to shore up its legacy.

Yes, I was always hoping the film would be so much more, but the end result is still a mighty damn fine film that still holds up today. Let’s hope a remake isn’t in the cards, because PUMPKINHEAD is better off being left alone. If they couldn’t get it right with three sequels, I can’t imagine how a remake wouldn’t be met with the same muddled results. It’s better to leave poor Pumpkinhead dead and buried – except for owning this excellent Blu-ray release of the one that started it all.