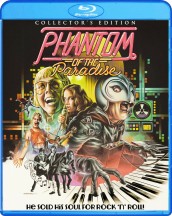 A nice companion piece to THE ROCKY HORROR PICTURE, this 1974 Brian De Palma film looks better than ever

The 1970s, we sure do miss you. That era of experimentation and filmmaking ownership is sadly a thing of the past, but the movies still remain and every now and again a reissue reminds you of how crazy brilliant that era was.

PHANTOM OF THE PARADISE was writer-director Brian De Palma’s comedic musical take on the PHANTOM OF THE OPERA legend. Very quirky, stylish and campy, it’s very different from the suspense driven efforts that would define his career, but it’s damn good nonetheless.

The story mixes in PHANTOM lore, THE PICTURE OF DORIAN GRAY and the FAUST legend in a story of record maestro Swan (Paul Williams) who steals a rock opera from musical genius Winslow Leach (William Finley). He destroys Winslow’s life until Winslow (as The masked Phantom) decides to take revenge and begins to dispatch the musical groups who try to perform his songs at the “Paradise” venue.

The real voice(and the only one who he feels should sing his music) is waif winger Phoenix (Jessica Harper). Winslow makes an alliance with Swan to transform her into a star and it works, until she breaks Winslow’s heart when she agrees to marry Swan.

There’s a ROCKY HORROR PICTURE SHOW vibe to the proceedings bringing in a bit of glam rock of the era with Gerrit Graham playing the hilarious singer Beef. There’s also some of De Palma’s later hallmarks with excellent suspense beats and split screen trickery.

Williams is perfect as the devilish Swan (and he also penned the film’s music), while Finley captures both the tragedy of Winslow and the terror of the Phantom. This was Harper’s first film as well, and she is phenomenal – bringing the same innocence and hungriness for fame that befits the role.

The new Blu-ray transfer doesn’t restore PHANTOM to its pre-release state though. There were many legal wranglings which are explained in the special features. The most notable is the name of Swan’s company which was Swan Song. Shortly before PHANTOM was released, an actual record label was formed with that name, so bad mattes had to be created to eliminate most of the Swan Song logos in the finished film.

There are detailed interviews with De Palma and Williams where we learn about the evolution of the project. De Palma actually had another writer on board (Luisa Rose who co-wrote SISTERS with him), but when she didn’t want to sell the project, he had to take all of her material out of the script and rewrite it entirely (doesn’t sound easy, frankly).

There’s a second disc (DVD, not Blu-ray) with even more special features including one with produced Edward Pressman, the making of the film, a Guillermo Del Toro moderated interview with Paul Williams, alternate takes, theatrical trailer and more.

PHANTOM OF THE PARADISE may not have the notoriety of ROCKY HORROR PICTURE SHOW, but it is a perfect companion piece – a taste of a special place and time where common sense and art collided and strange art pieces like these two films were conjured into being.

While PHANTOM might be a little broad for some audiences, its commentary on television and selling your soul for a piece of fame is almost omniscient. It was ahead of its time, and it’s amazing how De Palma tapped into something that has even more relevance today with the success of trashy, exploitative reality TV.