As Above So Below movie review 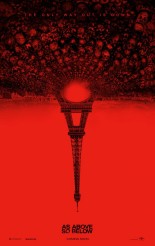 ©2014 Universal Pictures
AS ABOVE SO BELOW movie poster
Reviews

Movie Review: AS ABOVE, SO BELOW

Entertaining and erudite, although increasingly incoherent

One has to hand it to AS ABOVE, SO BELOW. Not only is it the first horror movie to make such extensive use of the real catacombs below the city of Paris, but it’s not often that you hear a character in a stressful situation – in any genre – ask, “Is this before or after Copernicus?”

Scarlett (Perdita Weeks), the protagonist in AS ABOVE, SO BELOW, is so erudite that she’s got two doctorates and speaks four languages, not counting the two dead ones that she only reads. When she reaches out for help to old boyfriend George (Ben Feldman), it turns out he can speak Aramaic and repairs ancient bell towers for kicks. These people aren’t dummies in academic terms, and when they start to decipher the kinds of complex puzzles that audiences appreciate in THE DA VINCI CODE, the clues are intriguing and make sense.

Unfortunately, a lot of their quest does not make sense. Scarlett is on the track of the famed Philosopher’s Stone (yes, the one referred to in HARRY POTTER – it’s an object of real-life historical lore) and a find she makes in Iraq leads her, the reluctant George, camera operator Benji (Edwin Hodge) and a trio of young Parisians (Francois Civil, Marion Lambert, Ali Marhyar) to the bone-choked tunnels under the City of Light. A couple of wrong turns and a cave-in later and the group is lost and probably trapped. Scarlett is still determined to find the Stone.

Scarlett’s single-mindedness would come off worse than it does if anybody had better ideas on how to escape the tunnels, but in the circumstances, she and George seem like the only people with any idea of how to get anywhere, so this part of the action plays relatively well. However, weird portents stack up so unevenly that we’re not sure what’s happening – are we meant to take the events as real or hallucinations? This seems to be intended as mysterious and disorienting, but it’s more often confusing.

Furthermore, director John Erick Dowdle and his co-screenwriter Drew Dowdle have conceived AS ABOVE, SO BELOW as a found footage feature. This doesn’t seem to help them or the story in any way. Benji could just have easily been a historian as a cameraman. This starts working against the film when, as is usual in these things, it becomes illogical for the camera to still be running. In fact, there are times when there is simultaneous action in more than one location when the camera cannot be in both places, so what’s the point?

We understand why the characters are claustrophobic and terrified, and the movie often works best when dealing with the problems of being trapped and disoriented. The supernatural flashes provide frisson, but when they start to function in contradictory fashion, it feels more like logic glitches than intriguing hallucinations or scares that are worth sacrificing coherence to achieve.

That said, AS ABOVE, SO BELOW is often a lot of fun in its excited historical notations and it certainly provides a view of Paris not often seen. It’s not a brilliant horror film, but it’s decent and has enough unique elements to recommend it.

Article Source: Assignment X
Article:Movie Review: AS ABOVE SO BELOW