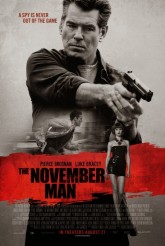 If a film centers on a former secret agent who was the best ever and is famed among his peers for knowing every trick in the book, casting Pierce Brosnan pretty much guarantees that the audience will immediately give credence to this part of the set-up. In THE NOVEMBER MAN, Brosnan plays Peter Devereaux, who is ex-CIA rather than any part of British Intelligence, and Devereaux is somewhat grimmer than that more famous spy Brosnan used to play, but there’s no avoiding the mental association.

In a prologue, we meet Devereaux, who is about to impersonate a diplomat to draw fire from an assassin. Devereaux’s protégé is Mason (Luke Bracey), a young agent who seems at once a bit too trigger-happy and too eager to please. Tragedy ensues.

Five years later, Devereaux is called out of retirement when his former colleague Hanley (Bill Smitrovich) relays a request for extraction from an ex-associate – and, we quickly realize, old flame – who needs to get out of Russia. Devereaux attempts to get his lady friend out of harm’s way, but this goes south, and once again, Mason is at the center of the mess. While the CIA tries to figure out why Devereaux and Mason didn’t kill each other, Devereaux wants to know what was really going on. He co-opts the assistance of a somber Serbian social worker (Olga Kurylenko) as Devereaux, the CIA and an assassin (Amila Terzimehic) all separately search for a young woman whose testimony can destroy the career of a Russian politician (Lazar Ristovski).

Director Roger Donaldson knows his way around an action sequence and can even make us jump on occasion, and screenwriters Michael Finch & Karl Gajdusek, working from Bill Granger’s book THERE ARE NO SPIES, provide some decent twists in the latter half of the story.

Unfortunately, there are glitches so glaring we expect them to be plot points. There is the fairly enormous matter of a personal secret of Devereaux’s that we can’t believe the CIA doesn’t know about at the outset. Then there are things like a cat finding its way into a locked apartment (these animals can be stealthy, but they don’t actually walk through walls) and a photo that the viewers will recognize immediately, even though it takes the characters most of the movie to do likewise. Then there are bits of sloppiness, like a written account of a multiple murder that includes the names of the two dead adults, but omits the name of a youth, even though the writer is ostensibly grieving all three.

Finally, there’s the issue of why in this era of Photo-shopping and false claims, the testimony of one refugee is considered such a potential thunderbolt by people who have engineered gigantic lies. Can’t they come up with a Plan B to discredit the witness if she comes forward, when she’s showed no inclination to do so in over a decade?

It’s entirely possible that Granger’s original work explained all of these issues, and of course didn’t have the problem of the visual proof of the photograph. However, with so much connective tissue missing, the story is too full of wait-a-minute plausibility potholes. In a lighter, more romp-like mood, these could be glossed over, but THE NOVEMBER MAN is dead serious. The tone doesn’t match the incidents, and the uninventive dialogue doesn’t help.

Brosnan, of course, is entirely persuasive as the veteran pushed to the breaking point, and Bracey has appeal and dimension as the younger spy whose allegiance is sorely tested. Kurylenko does well with her tricky role. Terzimehic has an impressive physical presence, veterans Smitrovich and Will Patton both score strongly as wily CIA high-ups and Caterina Scorsone invites sympathy as a very put-upon lower-level agent.

THE NOVEMBER MAN is diverting and Brosnan’s fans should be pleased; it just isn’t the kind of engrossing, thoughtful drama that its elements suggest it intends to be.