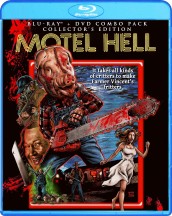 Of all the now cult 1980s movies, MOTEL HELL stands out as one of the craziest, strangest, funniest and most inventive. This 1980 horror flick which owes greatly to THE TEXAS CHAINSAW MASSACRE has not been treated well on home video – its last incarnation on DVD it was paired up as a Midnite Movies no frills double feature with DERANGED.

Once again Shout! Factory outdoes themselves with their re-release of cult gems and MOTEL HELL has been remastered and looks better than ever.

The tagline for MOTEL HELL remains classic and quite memorable: “It Takes All Kinds of Critters to Make Farmer Vincent Fritters.” This is a reference to Vincent (Rory Calhoun) who runs a little hotel off the beaten track with his sister Ida (Nancy Parsons of pre-PORKY’S infamy). He also has some of the best smoked meat in the County with the secret ingredient coming from a special spice in his garden.

Just like cattle Vincent and Ida find drifters and other unsuspecting people driving on the lonely road to their Motel Hello, force them to crash, taken them back to their place, cut out their vocal chords and plant them in their secret garden (this includes John Ratzenberger of CHEERS fame as a rock and roll drummer who has no dialogue, but meets a gruesome fate).

The film is incredibly twisted and lurid, but there’s something fascinating about how it never lets up with the looniness. It teeters on camp and horror, but it’s always kept grounded pulse by Calhoun’s creepy, straight-laced delivery.

The movie has many iconographic moments: the garden of people with burlap sacks over their heads making a creepy gurgling sound, the chainsaw battle between the town sheriff (Paul Linke) and a pig head wearing Vincent, and the greatest death throes confession in the history of horror films.

There are things that definitely date the film, but there’s a charm to it. There’s even a cameo by Wolfgang Jack that goes absolutely nowhere and it would have been nice to find out why. At this point, who cares. There was more imagination and craziness going on in 1980s horror than any other time in movie history. And as horror continues to be co-opted by the studios and neutered and homogenized, something like MOTEL HELL continues to age quite nicely and prove to be continual guilty pleasures.

The Blu-ray (which also includes a DVD as well) features some great new featurettes including a making of and a still gallery. There’s new audio commentary by director Kevin Connor, new interview featurettes with the creatives, interviews with actors Linke and Rosanne Katon, a look back at the character of Ida, the theatrical trailer and a still/poster gallery.

MOTEL HELL was not a perfect film upon release and it still isn’t without faults, but it holds up because there’s no other film quite like it. It’s not overly gory like many of its 1980 brethren and it’s not over-the-top enough to be unwatchable. It’s a perfect balance of black comedy and horror and will make you think twice before you bite into that tasty homemade beef jerky you find at a backwoods gas station.