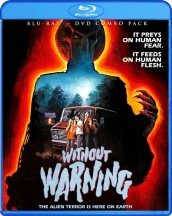 Flying teeth discs, aliens, Lynn Theel in a bikini - what more could you ask for from another 1980 lost cult classic 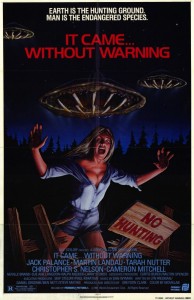 The alternate theatrical movie poster for IT CAME ... WITHOUT WARNING | ©1980 Filmways Pictures

WITHOUT WARNING is one of those oddball 1980 films that was released under different titles and different artwork as it rolled across the nation during platform releases, and like many films that did that, it’s hard to remember exactly what the film was about and which film it is.

In most of the posters, there’s an alien on the front and the film is called WITHOUT WARNING. Being a huge horror movie buff of the 1980s, I couldn’t even place the poster or the title when I heard it was coming out on home video. With a little digging though, I discovered it was actually a film called IT CAME … WITHOUT WARNING and when I was growing up we were treated to a screaming woman poster with flying saucer-like mouths with razor sharp teeth flying at her [check that version out above].

From there, it all came back to me and digging even further there was added reason why this movie was long forgotten – it was never given a formal home entertainment release. No DVD. No Blu-ray.

Shout! Factory once again rolls out the B-movie carpet for this confused and uneven slice of B-movie heaven (and it even has a reversible Blu-ray cover that let’s you choose which artwork you want on the cover – I chose the IT version).

WITHOUT WARNING begins as a space parasite film (those aforementioned flying mouths) and then turns into an alien film with an E.T. that looks like he stepped right off the set of THE OUTER LIMITS or THE TWILIGHT ZONE.

The story is pretty simple – a group of kids in a van head out on a camping trip in the mountains only to be picked off by an alien parasite. There are other victims too, and crazy old kooks in town that get into the action as well, but it really ends up being about last remaining teen female Sandy (Tarah Nutter) trying to escape the clutches of this alien menace.

What’s most perplexing about the film is it isn’t sure what it wants to be at times. The alien aspect is a major plot point, but when it’s revealed there’s a main alien baddie using these flying teeth discs as weaponry, the film becomes more of a cat and mouse thriller, but instead of a serial killer, it’s an alien.

Tonally, the film is all over the place. It never makes up its mind what it wants to be. It even squanders a major opportunity to kill off two of the four main teenagers (their death is off screen). Even more criminal, is hottie Lynn Theel is given so little screen time. She was infamously creature handled in HUMANOIDS FROM THE DEEP, so it’s disappointing that the aliens don’t get a piece of her on screen for an exploitation reprise.

It’s always nice to see Martin Landau and Jack Palance who do major scene chewing throughout the film too and give the movie it’s low budget “star power”. And a young David Caruso also shows up in a supporting role.

Much has been written about how WITHOUT WARNING was an unofficial inspiration for the far superior PREDATOR and I can sort of see that, but the differences are huge too (though, curiously Kevin Peter Hall plays the alien here and later the predator in that classic Schwarzenegger flick).

The amazing alien creation created by Greg Cannom is effectively creepy for the film’s low budget. In direct light, the creature is slightly comical, but hidden in the shadow, with the right light, this alien entity is terrifying. Like most horror movies, the less you see, the more effective an inspired creation can be. Even the flying teeth discs have their charm. They’re a bit overused, but the gore and creepiness is still quite cool.

Low budget film director Greydon Clark does his best with the limited material. It would have been nice to have more cohesion overall, but this is cheapie sci-fi/horror film delivers a few memorable, long-lasting moments which is a major achievement.

The transfer of the film is quite good. The only grain seems to come during the images where the opening titles appear. After that, everything is as crystal clear as a low-budget film of this nature can be.

Whether you saw the film as WITHOUT WARNING or IT CAME … WITHOUT WARNING, there’s something here for every horror fan. It’s far from perfect (most 1980s horror isn’t), but it’s charming nonetheless and it’s about time this film finally got its home entertainment debut (and due).