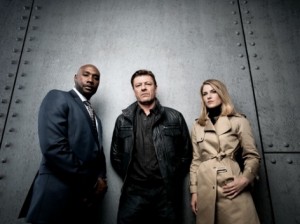 In TNT’s new series LEGENDS, Wednesdays at 9 PM, Sean Bean plays Martin Odum, an FBI agent who is uncannily gifted with “legends,” the term for long-term undercover identities. The trouble is not only that Martin has a tendency to become a little too absorbed in these identities, but also that he’s starting to question who he really is.

The series, based on Robert Littell’s novel, was developed for television by Howard Gordon and David Wilcox. Wilcox, whose producing and writing credits include LAW & ORDER, FRINGE, LIFE ON MARS, 666 PARK AVENUE and THE FOLLOWING, is present at TNT’s LEGENDS Q&A session for the Television Critics Association. After the formal panel, Wilcox remains available for further discussion.

ASSIGNMENT X: Are you the day-to-day show runner on LEGENDS?

AX: Once Martin finds out who he actually is, because presumably you’re not leading us into, “No, he’s exactly who he is, it’s all been a big fakeout …

WILCOX: I’m not going to answer one way or the other. I’m just going to say the ending [of the first season] is a good surprise, it has a great twist and it builds inexorably to the end.

AX: Can the show continue with more regular characters than Martin once you get to that twist?

WILCOX: Yes, it’s a renewable series, and yes, I really see Martin Odum as – we keep using the metaphor of the Russian doll, where you open it up and there’s another one inside. You open that up and there’s another one inside. The idea is, his journey towards what the truth of his identity is, is something that is very deep and it’s going to take awhile to get there. And that said, we’re learning as we go. We’re learning more of his history, we’re learning more of his back story and what happened to him to get him to this place.

AX: Is “legend” in this context a real FBI term?

WILCOX: It is. Robert Littell wrote the novel that it’s based on, and he also wrote THE COMPANY, which is a novel of the story of the CIA, and the term “legend” is a term of art used in the world of spycraft, and it’s one, obviously, that we’re embracing. I think it’s a cool way of thinking of undercover work – he is creating a false identity that he can use to infiltrate crime. The big change for us is, instead of him week to week creating an identity that is good for the crime that he’s doing, our big shift is, he has these identities already pre-existing and they have their own contacts, their own world, their own apartment, they have their own wardrobe, their own everything. It’s a deeply imagined character of what these legends are, and he has several of them out there, in rotation, and so when he, for example, at the end of [the first episode], he says, “We could have this weapon of mass destruction out there,” and he says, “Dante Auerbach is the guy who could do that.” Dante’s a legend he’s used in the past; it’s a legend he may use again in the future. And he knows if he steps into those shoes, he’s going to be able to tap into that network. Now, that legend may not work for the next case that he’s working on.

AX: In real FBI work, are there agents who have that many rotating legends? Are there people who go deep and then come out and do something else for awhile?

WILCOX: Oftentimes. But in the FBI, there is an evaluation that they can do, based on one’s aptitude for doing this kind of thing, and Martin is a character whose aptitude is off the charts. And it’s off the charts by virtue of the fact that he’s been damaged in some way that he’s able to have this sort of disassociation between Martin Odum and whatever legend he’s stepping into. So he can do it so cleanly. But there is a toll, there is a toll it takes.

AX: So LEGENDS is really more about the toll?

AX: How much levity is there in the series?

WILCOX: It’s not bleak, it’s not all bleak. I think it’s fun. The thing is, we don’t like to do jokes. The humor comes out of the moments and the character moments and everything, and I think that’s what Sean does really well.

WILCOX: It’s really hard to say. We’ve pulled from the book here and there, and the book’s amazing, it’s great. There are some particular differences that were adjusted basically because this is a TV show and the demands of doing that. I’ve written cops and FBI for a long time, I’ve researched it for years and years and years. So actually jumping in, I felt comfortable, I felt confident in terms of stepping into this world, having written on LAW & ORDER and FRINGE.

AX: How much involvement does Howard Gordon have in the series?

AX: Is he in the writers’ room?

WILCOX: No. He and I had a lot of discussions about the show and these characters and the stories that we’re telling. It’s really Howard and I melding minds and doing this. I mean, he’s the hardest-working man in television, so he doesn’t have a lot of time, but when I get him, it’s great, because he’s a genius, so he and I have talked extensively, brainstormed extensively on this.

AX: It’s unusual to have an FBI agent who, when he’s not undercover, speaks with an Anglo-Irish accent. Do you explain that eventually?

WILCOX: I think people accept it. I also think that we certainly explain it in the series.

And then as well, this is a show about Sean’s character, about Martin Odum learning, or I should say asking, who he really is. And that’s a clue – his accent may be a clue, the fact that he’s in the FBI may be a clue.

WILCOX: It’s definitely easier and Sean really prides himself on doing an enormous amount of research and preparation, and obviously, we try to accommodate that when we’re coming up with these legends and talking about who they are and everything. And the reality is, on a television schedule, you can only do so much preparation, obviously. So we really tried to take his accent and his persona and everything and play to his strengths, and in a way, that’s still really compelling TV and really compelling drama, but at the same time, it’s certainly making him look good, it’s like we’re getting the best out of our actors.

AX: When Ali Larter’s FBI character Crystal McGuire goes undercover, she winds up having to give someone a lap dance. Is it important to show the contrast between her supervisory duties in the office and what she has to do in the field?

WILCOX: Yeah. There is a mix of her being in the field, her overseeing Martin’s undercover activities, but as well, she also begins digging into the mystery of Martin’s identity as well – what happened to him ten years ago, what happened to him, why is he this guy who’s driven to seemingly answer these questions, what’s behind it? And that’s what unfolds.

AX: And will Martin have to give someone a lap dance?

WILCOX: [laughs] At this point, I don’t want to reveal anything. That’s what the season builds to, is the big lap dance. That’s the big twist.

AX: Do you know how you’re going to end the series?

WILCOX: I’m not going to end it [laughs].

AX: Do you know when you’ll find out whether you have a Season 2 pickup?

AX: What would you most like to say about LEGENDS that hasn’t been asked yet?

WILCOX: I think that this show for TNT, it’s a new kind of show for this network, and I think it’s going to be very cool.