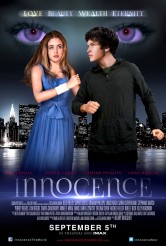 “Adequate” is probably not a designation most filmmakers seek, but it seems the best word to describe INNOCENCE. Based on Jane Mendelsohn’s 2001 YA novel, with a screenplay by Tristine Skyler and Mendelsohn, INNOCENCE sails serenely along as though no one had ever before made a movie about sinister doings at a high-end high school.

This attitude of, well, innocence serves INNOCENCE moderately well for the most part. It allows director Hilary Brougher to create atmosphere and some suspense that lasts for a while. This is partly because the film has a good lead actress in Sophie Curtis, who plays watchful teen Beckett Warner with a becoming intelligence, and partly because we hope against hope that the explanation is going to be more interesting, or at least more original, than what turns out to be happening.

Beckett loses her mother in a surfing accident. Four months later, her grieving father, best-selling novelist Miles Warner, relocates the two of them to Manhattan and enrolls Beckett in an exclusive prep school, even though the place has an oddly high suicide rate among its students.

Beckett falls for likable neighbor boy Tobey (Graham Phillips) at the same time dad Miles and school headmistress Pamela Hamilton (Kelly Reilly) take an interest in one another. This is enough to keep Beckett enrolled, even when an apparently depressed classmate plunges to her death inches away from father and daughter.

At the same time, Beckett begins having awful nightmares and visions, as well as seeing strange occurrences at school and at home.

It’s refreshing to see a young heroine who is proactive in trying to find out what the heck is happening rather than relying on smarter, less attractive friends to warn her. There’s also a pleasingly subversive riff in something that Beckett does inadvertently but possibly instinctively to protect herself from the particular danger that’s afoot. This again makes INNOCENCE relatively pleasing.

Unfortunately, mood, a few good jump scares and even a smart main character can carry things only so far before the mystery is revealed, at which point, anyone who has seen or read even a smattering of genre fare is going to realize, “Oh, this is the same plot as X, Y, Z, as well as A, B, C and D.” Just because the characters seem to be totally illiterate when it comes to pop culture (an even bigger stretch than usual when the main character’s father seems to be a horror/suspense writer) doesn’t mean the audience will be as well.

By the finale, INNOCENCE succumbs to the weight of its lack of originality, but for viewers who are open to more of the same so long as it’s decently done, it’s acceptable fare with a bit of flair.