The actor talks his role and working with Robert Rodriguez 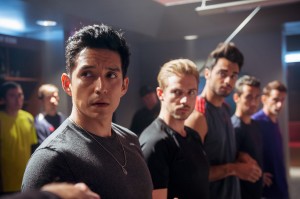 In El Rey Network’s MATADOR, now in its first season Tuesdays at 9 PM and already renewed for a second, Gabriel Luna stars as Tony Bravo. Tony starts out as a DEA agent who unexpectedly has his daydreams of being a professional soccer player fulfilled when he’s recruited by the CIA to try out for the L.A. Riot team, owned by international criminal Andres Galan, portrayed by Alfred Molina. When Tony surprises his CIA handlers by securing a spot on the squad, his missions become more dangerous.

Luna is a native of Austin, Texas, which happens to be El Rey Network founder and chairman Robert Rodriguez’s home base. The actor has several feature films under his belt and had guest appearances on PRISON BREAK, TOUCH and NCIS: LOS ANGELES, but Tony is his first series lead.

When El Rey holds a rooftop party for its talent, executives and the Television Critics Association at the Beverly Hilton, Luna is there, going out of his way to ensure that anyone who wishes to speak with him has the chance to do so.

LUNA: Yes, INTRAMURAL [features] a lot of the SATURDAY NIGHT LIVE cast – Kate McKinnon, who was just honored with an Emmy nomination for her work on SATURDAY NIGHT LIVE, Jay Pharaoh, Meg Bennett, Jake Lacey, who was in OBVIOUS CHILD, a film that was just released. [INTRAMURAL is a] great big football comedy, a sports comedy. It’s really great, in the vein of WET HOT AMERICAN SUMMER, DODGEBALL, stuff like that. So that’s great. It’s a big comedy. So people get to see something else. And other than that, I have James Roday’s GRAVY – James Roday, the star of PSYCH. Those are coming up. Hopefully, you’ll get to see those.

AX: Looking ahead, are you sort of worried about working for a more traditional network someday?

LUNA: Oh, if ever I have to leave the confines of the beautiful El Rey Network? After six years and a movie? [laughs] Oh, man. I’m not even worried about that. I’ve never looked too far ahead. I describe my life to a lot of people as the “Billie Jean” video, because I was born to a fifteen-year-old widow and my grandmother worked in a Laundromat and my grandfather was a tile setter. None of them are involved in the arts. So everything I’ve ever done has been the “Billie Jean” video, where Michael [Jackson is] dancing down the sidewalk and the next panel of the sidewalk lights up and you step there and you’re dancing and then the next panel lights up and you step there. You just go where the light is and that’s all I’ve ever done. So I’m not really worried about what’s at the end of the alley, I’m only worried about, where is the light, where am I going?