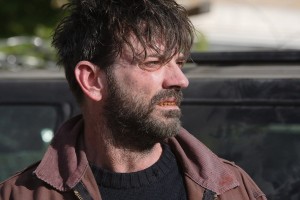 If you don’t like zombies, this show is not for you. If you are a zombie aficionado and can debate the merits of the classic slow-moving zombies of genre-meister George Romero, THE WALKING DEAD and Max Brooks’ WORLD WAR Z novel vs. the running zombies of the Zack Snyder/James Gunn DAWN OF THE DEAD remake, Danny Boyle’s 28 DAYS LATER (okay, technically irreversibly infected living people in that one, but the net result is the same) and the film version of WORLD WAR Z, then Z NATION is for you.

Z NATION is, in fact, particularly for those who thought at the time that the Snyder/Gunn DAWN would have made a great TV series and wish that Walkers might move a little faster. In the series opener, “Puppies and Kittens,” we get a short bloody prologue in which we learn that the U.S. government has fallen. Then it’s three years later and people who have survived the zombie epidemic so far are doing their best to keep going. Military personnel still take their orders seriously, even though they know those who gave the commands may no longer be alive.

Former Delta Force officer Hammond (Harold Perrineau) is trying to get ex-prisoner Murphy (Keith Allan) to a lab in California, as Murphy is the only known survivor of zombie bites, courtesy of an experimental vaccine. When they reach a small settlement, Hammond gets help from a few other veterans, Garnett (Tom Everett Scott) and Warren (Kellita Smith). Nothing goes as planned, and there are some big surprises.

For those who may have read about Z NATION, rest assured this is not a comedy, let alone a parody. There is some dark humor here and the show is blessedly unpretentious, but the characters and the tone are serious. The scope of both the gore and the attacks is impressive and there are just enough hints of things to come – are the zombies learning to strategize? What’s going on with Murphy? – to keep us wondering about long-term developments, as well as the plentiful immediate jeopardy.

Perrineau is strong as a natural-born leader, while Scott holds our interest as a one-time badass on the verge of cracking up. Smith has cool authority and DJ Qualls adds a human factor as the lone inhabitant at an ice-bound government tracking station.

Z NATION borrows openly from the DAWN remake and may be cribbing a bit from Brooks’ seminal book, but it’s all in the service of a strong narrative that works. If you like your zombies and your pace fast and your blood splatter at levels that would merit a theatrical R rating, made by people who know what they’re doing, citizenship here is warranted.