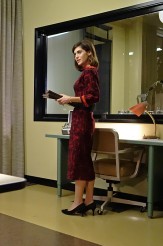 Lizzy Caplan on the joys of MASTERS OF SEX – Exclusive Interview

The actress talks about delving into her real-life character 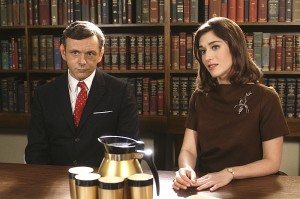 In Showtime’s MASTERS OF SEX, now in its second season Sundays at 10 PM and renewed for a third, Lizzy Caplan plays real-life sex researcher Virginia Johnson. Johnson had an extremely complicated relationship with her fellow researcher and employer Dr. William Masters, played by Michael Sheen. The two were sexually involved, but although emotions are definitely part of the equation, in terms of where the story – based on Thomas Maier’s nonfiction book, adapted for television by MASTERS executive producer Michelle Ashford – is now, both Masters and Johnson keep up the pretext that what they are doing with one another is strictly part of their research. Complicating matters further is Masters’ marriage to Libby, played by Caitlin FitzGerald, who has become good friends with Johnson.

Caplan earned an Outstanding Actress in a Drama Emmy nomination for her work in the first season of MASTERS. The Los Angeles native has done a lot of film and TV work prior to MASTERS OF SEX, including series regular roles on THE PITTS, THE CLASS, RELATED and PARTY DOWN, with arcs on TRU CALLING and TRUE BLOOD and a memorable part in the feature film CLOVERFIELD.

Caplan is in attendance both on the red carpet for a Paley Center for Media event for MASTERS OF SEX and on the set for the Masters home when a visit is arranged by Showtime for the Television Critics Association. This interview is compiled from conversations at both venues.

ASSIGNMENT X: Michael Sheen and Michelle Ashford have said you all have this way of working together where you’ll take a scene and really discuss what each character is going through, so that by the time you shoot it, you know the subtext for each line.

LIZZY CAPLAN: Yes. We are not figuring it out on the day. Any changes that are made on set are very, very small changes. This has been the most collaborative show I’ve ever been a part of, and they really respect the idea that they’re our bosses, but Michael is the primary custodian of Masters’ story, I’m the primary custodian of Virginia’s story, and [the writers] have the responsibility of serving every character. Our responsibilities are really just to our own characters. As I was getting ready for this [on-set event], Amy Littman, one of our writers and producers, was in the trailer, and we were working on a scene that we’re shooting. And it’s a massive, four-page scene, and Michael is going into it with a very, very clear point of view and I am going into it with a very, very clear point of view that is not the same as his. I am the most turned on by this show when we get to do scenes like that, because they work really, really well. The audience knows.

I think the most recent example is the first episode in the second season, where the two of us are in the hotel lobby. That was the first scene, the meatiest scene, that he and I had to do within the first two weeks of shooting. It was pretty much our first scene together in the second season. And we felt everything click into place, we felt fully back in Season 2. Michael and I have been working together for awhile now, and I fully trust his point of view, and he fully trusts my point of view, and I find it honestly the most exhilarating when I don’t know everything that Bill is thinking and he doesn’t know everything that Virginia’s thinking. Because strangely, the scenes end up working better when we have secrets from each other, as the real people did. But at the end of the day, we’re a team and we’re partners and the scene we were going over today we attacked as a team, and the bouncing back and forth between those two mindsets is the best part of this job.

AX: The scenes where Virginia and Bill are wired up and recording on their own data and then looking at it later – is that in any way analogous to watching your own performance as an actress?

AX: Seriously, do you watch your own work at all?

CAPLAN: I do. I watch it and I can’t say that it’s the most pleasant show to watch myself in, but I’m really proud of it, and I think everybody else in it is so [good] – I mean, my general takeaway from watching myself in stuff is, everybody is so good in this, except for me, and this is no exception.

CAPLAN: People ask that question – you think I’d have it locked and loaded, but there are so many moments that I love in Season 1. It’s so impossible to answer that question. I consider Season 1 this whole entity, and all of it was so incredible. The one honestly that stands out the most to me is the scene where Bill and Virginia are watching the footage of when they attach the camera to Ulysses [the device female subjects use as a male surrogate], and it’s the first time they’re watching any footage, that anybody’s ever seen any footage of the inside of a woman’s vagina. And what I love about that scene is, it feels like two lovers at a drive-in movie. It’s so romantic, when the reality is, they’re watching scientific footage and they’re two people who are a woman sleeping with a married man. If you look at the reality of the situation, it’s very different than the feel of the scene. And it’s also one of the few times that Bill smiles at Virginia, and I grew to really appreciate those moments [laughs].

AX: Where you’re both on the same wavelength?

CAPLAN: Yeah, when he’s being sweet to her.

AX: What scene do you feel you made the greatest contribution to in terms of the content of the scene?

CAPLAN: Oh, wow. It’s hard to tell, but maybe because it’s the script that’s the freshest in my mind – we were working out the final scene of Episode Eleven, it’s sort of an ongoing process, this scene, and I think Amy Littman, who’s the writer of this episode, we finally cracked it in a way that it makes perfect sense for Bill and perfect sense for Virginia and perfect sense for the greater story, and when that happens, it’s extremely exciting.

AX: Virginia has a very intriguing relationship with Bill’s wife Libby, played by Caitlin FitzGerald. What can we expect from that?

CAPLAN: Libby is no dummy, and I think we’ve done a really good job in never portraying her as such. The writers never wanted to make her a two-dimensional character, and I think that a lot of people would have done that, and it’s just not as interesting a story. And the truth is, the real Virginia and the real Libby had a friendship, a close friendship, while all of this was going on, for about fifteen years. So how do you make that a justifiable act in any scene? Because Caitlin never comes in saying, “Oh, Libby’s an idiot, I’m playing an idiot,” and I don’t come in thinking I’m an adulteress or somebody’s mistress, and so how do we make this friendship make sense? And how do we make these women capable of being there for each other, even in the face of this monster elephant in the room? And that’s a very interesting and occasionally difficult situation that will continue being mined for very odd scenes, I think onward.

AX: Do you have a favorite set on MASTERS?

CAPLAN: I really miss the maternity hospital set, because that was around since the inception of the show. We actually shot the pilot in Queens, in New York, at an abandoned tuberculosis hospital, and then they rebuilt the entire corridor on a soundstage here. And it was one of the most beautiful sets I’ve ever seen. Our new set, the clinic, the Masters and Johnson Clinic, is still finding its identity, but I will grow to eventually love it because it’s our set probably for the remainder of the series. I will say I don’t ever like coming to the Masters house. The energy is really weird in here for me, for Virginia. Occasionally, [Virginia is] invited over and it’s always awkward. It’s strange, because it’s so beautifully decorated – I actually think it’s by far the most beautiful set, but I don’t like being here.

I actually just bought a house and redid the whole thing, and it’s a 1956 mid-century California home, and when I bought it, it was just a white box, and I’ve turned it into this sanctuary that I never get to hang out in. But I’ve gotten very into design and mixing and matching things, because hanging on out this set, my initial instinct was to just go with the Masters house somewhere, but that would be creepy and weird. I need a little break from it.

AX: Has your process changed at all from Season 1 to Season 2?

CAPLAN: Last season, I would unwind and learn lines for the next day with a glass of wine. I don’t do that any more. So now I’m officially the most boring person in the world. There’s no unwinding. I’m awake and working or face-planting and asleep.

AX: Do you still keep in touch with any of your PARTY DOWN cast mates?

CAPLAN: All of them. Every single one of them. I think we’ll all be friends for life. Martin Starr and I have actually known each other since we were seven years old. Those are all my friends – Zach Woods and Martin Starr and T.J. Miller. It’s really cool that all of a sudden, all of these people that I came up with, who are used to being struggling actors, all of a sudden, like SILICON VALLEY is a show that’s working really well and they’re all doing it. It’s really awesome to see your friends start kicking ass.

AX: You’re being interviewed a lot for this series. Does having to talk about your work so much affect the work itself in any way, like you thinking, “Now, I wonder how I’m going to describe this”?

CAPLAN: Clearly I should give more thought to that type of stuff, but no. If anything, I think that being on this show has forced me to be a lot more thoughtful about the work that I’m doing and the message that we’re trying to convey in this show.

AX: How is working with director Michael Apted on MASTERS?

CAPLAN: Michael Apted is like the father of this show. He directs the majority of the episodes of Season 2. Maybe I’m just speaking for myself, but he’s my favorite human being on the face of the planet.