The actor talks about working with Emmy nominee Allison Janney 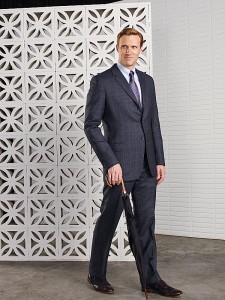 Showtime’s MASTERS OF SEX begins its second season Sunday July 13 with three Emmy nominations under its wing. One is for leading actress for Lizzy Caplan as real-life research pioneer Virginia Johnson, who teamed up with William Masters (played by Michael Sheen) in the late 1950s to investigate the then-little explored phenomenon of human sexuality. Beau Bridges gleaned a Guest Actor nomination for his performance as the fictitious Dr. Barton Scully, a friend of Masters who loves his wife but is sexually drawn to other men; Allison Janney has been nominated as Guest Actress for her work as Scully’s wife Margaret, who struggles to understand her spouse.

In MASTERS, developed for television by Michelle Ashford from Thomas Maier’s nonfiction book, Teddy Sears plays Dr. Austin Langham, a married physician who dallies often with other women, but is caught off-guard by his emotional feelings for Margaret. The two have an affair which Austin breaks off when it becomes too intense, but later, Austin and Margaret share a companionable late-night swim.

At the end of Season 1, Masters had presented his study on sexuality, complete with film, to an audience of other doctors who were so scandalized that Masters lost his university job as a result. Scully and Austin are still there, however.

Actor Sears is on the red carpet at a Paley Center for Media event for MASTERS OF SEX. He takes some time to discuss his feelings about Austin.

ASSIGNMENT X: Is Masters’ firing going to benefit Austin? Will it help him move up the hospital ladder?

TEDDY SEARS: No. We have not explored that in Season 2 yet, but I don’t think so. We’re in two separate departments. I’m in bones and he’s in female reproduction. So while we’re in different departments, you will see us I think together more in Season 2, because the study has moved out of the hospital, it’s still going on, and I have a very strong friendship with Johnson, which you’ll see explored in Season 2. And of course, Johnson and Masters are doing everything together, so …

AX: What is Austin’s relationship like going forward with Allison Janney’s character Margaret?

SEARS: I don’t know which way that’s going to go, but I really, really hope that I get to do more stuff with her. She was great.

AX: What were your feelings about the swim scene where you’re both in the pool?

SEARS: That was my favorite scene to shoot last year, and it was the most challenging as well. Emotionally, it was a difficult scene, but then, the water was a challenge to shoot in and we had to keep our heads up, we had to float, we had to do all these really technical things which were a challenge in the scene, and then we had to have a very intimate, emotional talk with each other. But I loved that scene, and I felt like it captured the moment perfectly of two people who are floating – literally floating in water, but who are both floating, who are untethered in our lives, she from [her husband played by] Beau Bridges and myself from my [onscreen] marriage.

AX: When Austin participated in the study in Season 1, you had unclothed intimate scenes where you were covered in wires attached to the graph-making machines. Was the swim scene more difficult than those?

SEARS: That actually was, yeah, come to think of it. That was bar none – Allison and I were beat up after that day. We were beaten up physically, emotionally, but we both received really nice emails the next morning from Michelle Ashford, who essentially said, “Thank you, that was exactly what we wanted.” When the bosses are happy, that’s a good thing.

AX: Do you have any other projects we should know about right now?

SEARS: I just finished shooting a movie in the fall called CURVED with Julianne Hough. It’s sort of a psychological thriller, and I don’t really know anything about it beyond that – I don’t know about a release or any of that. But it’s Universal Pictures, it was Jason Blum and Blumhouse, and it was a great time. Besides that, I’m a hundred percent focused on this.