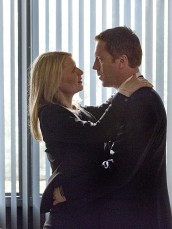 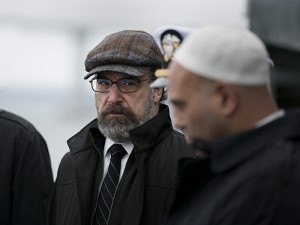 Both the DEXTER and HOMELAND season finales, aired back to back on December 16, carried, beyond the usual preliminary cautions, one-time warnings that the content of the episodes might be disturbing due to the tragedy in Connecticut that occurred on Dec. 14.

In the case of DEXTER, most viewers likely thought, “Excuse me? You’re saying this show is ever not disturbing?” In fact, there wasn’t anything in the episode likely to remind people of outside events that isn’t on the show every week.

In the case of HOMELAND, though, the notification was justified. There is a scene in a room full of sheet-covered bodies that is profoundly saddening on its own, doubly so with the real-world resonance.

Given everything that’s been going on in HOMELAND this season, the scene and what precedes it aren’t totally unexpected, but exactly how it happens is a shock.

After the killing of top terrorist Abu Nazir in the previous week’s episode, CIA agent Carrie Mathison (Claire Danes) is not only finally vindicated, but a heroine who is likely to receive a huge promotion. Her mentor Saul (Mandy Patinkin) is happy for her – until Carrie says she’s thinking over leaving the agency to be with Brody (Damian Lewis), the almost-terrorist who turned and helped them bring down Nazir. Saul is appalled that Carrie would even consider abandoning her career, especially for Brody.

CIA official Estes (David Harewood) has ordered top assassin Peter Quinn (Rupert Friend) to take out Brody, even though Brody has more than lived up to his end of the deal with the CIA. Because Saul has deduced Estes’ plans, Estes has Saul locked up and threatens to ruin his career. However, after spending a weekend out in the cold, watching Brody frolic with Carrie at Carrie’s family cabin in the woods, Quinn comes to the conclusion that Brody isn’t a danger. Quinn therefore shows up with his gun in Estes’ bedroom and says that he thinks this isn’t about Brody being a threat, it’s about Estes covering his own mistakes. Quinn isn’t going to do that and if Brody should die unexpectedly, Quinn will be back.

Estes lets Saul go, brusquely saying he’s changed his mind (it seems unlikely Saul will ever find out exactly what caused this). Brody and his wife Jessica (Morena Baccarin) finally break up for good and Brody gives his blessing to former best friend Mike (Diego Klattenhoff) to return to the Brody family – Mike had been there while Brody was presumed dead and fits better than Brody does.

Brody and Carrie both attend the memorial for U.S. Vice-President Walden at CIA headquarters. Walden died of a heart attack – both Brody and Carrie know that Brody caused this to save Carrie from Nazir, but no one else is aware of this. Brody gives Carrie the nod to leave the room during the service, and they slip away. Carrie tells Brody she’s decided to be with him. Then Brody looks out the window of the room they’re in and notice someone has moved his car from where it was to a no-parking zone in front of the building.

And then an enormous bomb goes off.

In the immediate aftermath, Carrie almost shoots Brody, but he persuades her that he didn’t do it. The bomb has killed almost everyone at the service, including Walden’s wife, young son and most CIA officials, including Estes. Saul isn’t there – he’s been supervising the at-sea burial of Nazir.

Carrie arranges a false identity for Brody. While this is happening, the tape that Brody made when he almost did commit a suicide bombing a year earlier is released to the news, along with a statement from Nazir’s organization, claiming responsibility for the bombing. Brody’s family is horrified, believing he did it after all. Carrie and Brody see that he’s being framed in revenge for turning on Nazir. Carrie helps Brody get over the border, but says she has to go back and clear his name. Brody thinks this is really goodbye forever. He loves her and hikes off into the darkness.

At the CIA building, Saul says Kaddish, the Jewish prayer for the dead, over the approximately two hundred sheet-draped bodies on the floor. (Some viewers wrongly thought he was saying something in Arabic or Farsi. No, Saul is Jewish and he’s reciting the prayer in Hebrew.) Carrie enters the room, says Saul’s name and the season ends.

Before the bomb goes off, we’re waiting for something to happen – surely the season finale isn’t going to be simply wrapping everything up – but we’re so geared up to think that Quinn is going to kill Brody that we’re not looking for a larger incident. Once Quinn pulls out, we start being primed again, but the bombing of the memorial is as shocking as it’s meant to be.

We’re also pretty surprised that Brody ends the season alive, albeit probably not where he’s likely to show up again any time soon. The show very cleverly subverts our expectations by playing into TV clichés with doomed characters – he’s happy, he’s cleaned things up with his family, he’s atoned, surely he’s going to die tragically and leave Carrie heartbroken. Or perhaps he’ll turn out to be a bad guy after all and a betrayed Carrie will be forced to kill him. Nope, she’s still in love, he’s apparently still a good guy and he’s just going to have to run like hell.

One of the truly amazing things about HOMELAND is that we’re two seasons in and we still can’t be one hundred percent sure about Brody, although once he didn’t set off the suicide vest, it appeared that he no longer thought that blowing people up was a good idea. He did hate Walden personally, but that’s a somewhat separate issue. We saw him repeatedly tell Roya that he didn’t want anything more to do with Nazir. But scrutinizing every single fact that we’ve been shown, it seems like there’s still a slight possibility that Brody may not be as clean as he seems and as Carrie believes him to be.

Danes and Lewis have terrific chemistry – we believe that Carrie and Brody love one another, though we’ve already seen how Carrie is away from the job and are with Saul in thinking that having her quit is not in her or the country’s best interests. Since the episode is titled “The Choice,” it’s fitting that Carrie actually gets to make the choice, instead of having it taken from her; true, by the episode’s end, things are strongly weighted on the side of her returning to the CIA, but it’s not like Brody has died or (that we know of) betrayed her.

Season 3 should be lively, what with a new CIA director and Carrie and Saul having to start all over in finding out and capturing whoever is now running Nazir’s organization.

Coming back to that opening disclaimer, though, looking at those white-shrouded bodies on the floor is a truly terrible sight. Within the story, it’s wrenching. In larger terms, right now, it paradoxically reminds us that foreign terrorists seem to be the least of what Americans have to fear in real life at home.