Interview: FRINGE showrunner J.H. Wyman on Season 5 and the end

The executive producer talks about wrapping up the ground-breaking series 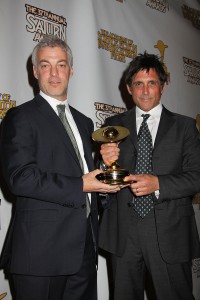 FRINGE is now in its fifth and final season on Fox, Fridays at 9 PM. For the first four seasons of the show, created by J.J. Abrams, Roberto Orci and Alex Kurtzman, eccentric scientist Walter Bishop (John Noble), his son Peter (Joshua Jackson) and FBI Special Agent Olivia Dunham (Anna Torv) investigated strange phenomenon, including an alternate universe where Peter had come from and where there were alternate versions of Olivia and Walter. During this time, Peter and his father, once estranged, grow close and Peter and Olivia fall in love.

In Season 5, it’s 2036, Walter, Peter and Olivia have been trapped in amber for twenty-one years and wake up to confront a world that’s been taken over by the Observers.

At a press event for FRINGE, executive producer/show runner J.H. Wyman talks about where the series is going in its final episodes and where it has been.

ASSIGNMENT X: When in the life of FRINGE did you and the other creative powers that be come up with the idea for what you would do in fifth season?

J.H. WYMAN: Well, [fellow executive producers] Akiva Goldsman and Jeff Pinkner and myself came up with [Season 4]  Episode 19 [entitled “Letters of Transit”], and we are sort of in a tricky position because we had talked about this being a possibility. But we understood that the [ratings] numbers were what they were. We had faith that we were going to be renewed, but we wanted the concept to sort of say, well, how could we get this thing platformed and do a backdoor pilot for what some of the ideas and thoughts were we wanted to do for the fifth season. So we actually used the spot, which we traditionally used for the one off the beaten path – Episode 19, we consistently always did things that were off the track, so we ended up by using that spot for a backdoor pilot [for Season 5], which is what it was. So the idea of what the big movements are in the story that we’re going to tell this year, that’s how it came about. 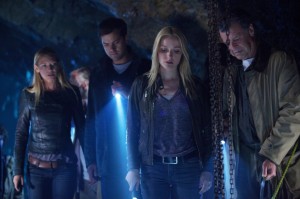 AX: One of the things that people frequently say about FRINGE is how much viewers love the family dynamic between the characters. In Season 4, you started out with nobody knowing who the heck Peter was, and then going in a large arc to get Peter back in, to get Olivia back into who we knew her as being, and to get the relationship back. Had that always been the plan, or had you planned something else and then sort of went, “Oh, we need to get everybody back into the family relationship”?

WYMAN: Some of the themes that we were dealing with were impact and I was interested [in], you are responsible for your own future and you are responsible for where you stand with your interpersonal relationships and that life is defined by the connections that we make. I really believe that. So I was really interested in saying, “Okay, well, how can things become better?” And just to demonstrate, ‘What impact do you have on others? If you were gone, if you were erased from time and you didn’t happen, would people be different? Did you make a difference in people’s lives? Did they make a difference in your life? What would happen if the people that you loved and were closest to just disappeared and never existed? Would you be a different person? What influence did they have on you?’ All these things are really interesting to me and to my colleagues, so it was basically what I wanted to talk about. So when Peter starts to come back, you realize it’s about relationship-building. Walter’s still the same Walter because Peter starts to bring that out in him, and that’s what my point was, that it doesn’t really matter – if you try, you invest and you show up, you can have very rich relationships and you can make a difference, and that’s what I was so infatuated with talking about.

AX: One of the odder things that occurred on the show was Anna Torv essentially playing Leonard Nimoy, when William Bell essentially possessed Olivia Dunham …

WYMAN: You know, what a funny end to that story is, imagine writing “And then William Bell goes into Anna.”

JOSHUA JACKSON: I don’t remember it being phrased like that.

WYMAN: It would have to be moved to cable. But here’s the thing. We send in the script and we’re expecting for Anna to call back and go, “Have you lost your minds? You want me to play William Bell? How am I going to do that? How does one go about doing that?” Not a peep. So everything you saw was completely her, completely just embracing it. I was looking at the phone [after Torv read the script] going, “It’s going to ring. It’s going to ring.” But it didn’t ring. She did a great job.

AX: What can you say about the Peter and Olivia relationship in Season 5?

WYMAN: That it’s a good one. I think that people are going to be – again, it’s a love letter. I believe in the Peter relationship with Olivia, and I wanted to make sure that it was worthy of all those people who are invested in that relationship.

AX: Is that hard to live up to after doing the episode “A Short Story About Love”?

WYMAN: [laughs] It’s actually in a weird way more of a FRACTURED FAIRYTALE romance, but in a cool way. What’s really key is what happens after they get out of the amber and what has happened. From the time they disappeared, the time they went into that amber, what happened to them? How did they get ambered? What happened to this team? Walter, William Bell – how did this happen? There’s a large story there.

AX: How did the amber get over to this universe, because up until now, it had only been a feature of the alternate universe?

WYMAN: Yeah, the amber is over there, but everybody knows the technology. September knows the technology, Walter knows, there’s a lot of ways to get it, but it’s a good technology. It was [present in our universe in Season 1], you just didn’t know it. There was a bus in Season 1, that was actually when they were trying to figure out the pattern. The bus looked like a weapon, and people thought it looked like a weapon of mass destruction, and basically, it was amber. And now we’ve explained what amber is, but the truth is, I can’t take credit for that, nobody can, because we didn’t know at the time that that was where we were going with it, but it’s kind of an example of fortunate storytelling that you could pull from the past and put into the future.

AX: How did you ultimately come up with the finale for FRINGE?

WYMAN: There have probably been three or four endings, and everybody had an idea of where we would end the show. I think this is the authentic way to do it, because it really follows this thematic, “What are we trying to say?” Again, it always goes back to what I’m trying to say with my work. I think it’s fair to say that it [FRINGE] is a living, breathing organism … And [the storytelling] isn’t flippant. It’s really, “Okay, how can I utilize the future, the past, the present to get these themes that we’re trying to demonstrate home? Being a living, breathing organism, it’s going to change and you’re going to say, “Well, I never saw that color [before] and boy, isn’t that beautiful?” I’ve always maintained that I truly believe that the show has a natural end, that it is always something that we know is right. But how that takes shape is always in flux. So when I was facing how am I going to write thirteen episodes [for Season 5] that encapsulate everything that everybody wants to see? How am I going to move people? How am I going to make them feel that, four years of their lives were invested wisely? I could only go back to what I personally as a viewer and being a huge fan of television would want. And that is so every single person that I’ve invested for four years, I want to see them get what they deserve to get. Some things may be unexpected. Some things may be expected, but I want them to feel like what they’ve got has been earned, and I don’t want unanswered questions that make me confused. I want to be able to feel like there’s a sense of closure. But at the same time, what I’m really after is to make sure that there is a feeling of hope from this, that at the end, when you’re finished watching it, you can say, “Wow, that was very moving, and I feel really good, and I feel emotional,” but the next day driving to work, you can actually say, “I think I can imagine where they’re going to be in their lives and how it would go on and that the people I fell in love with for four years, they’re going to be okay, that I can imagine and feel all right and let FRINGE go off into the ether in a way that is satisfying and bittersweet.”