A strong conclusion to Season 4, that’s made better knowing Season 5 will wrap everything up 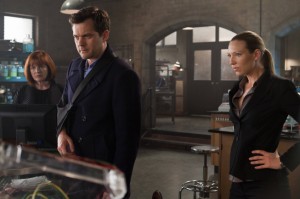 There are many puzzle pieces in play during the second half of the FRINGE Season 4 finale – “Brave New World – Part 2.” All the plot strands that have been set up during Season 4 get some kind of pay-off in an enjoyable if a little underwhelming wrap-up which would have probably worked better if it was aired in a solid two-hour block as opposed to aired during two separate weeks.

The big whammy is the return of William Bell (Leonard Nimoy) and what he’s been up to. His goal to collapse the two universes and create a new one was done, in part, because he was inspired by Walter (John Noble). Walter was the one who felt he could create a better world and play God, and when he realized he was wrong, he had that part of his brain extracted from him (something referenced in “Letters of Transit”) which is why Walter doesn’t remember what all this is about.

Meanwhile, Olivia (Anna Torv) realizes the reason why she’s been activated is that she’s the catalyst with enough energy to collapse the two universes. Combining forces with Peter (Joshua Jackson) who can see this new world, because he’s not of this one – the two of them manage to break into the third world that’s being created by Bell and try to stop him. As his plans are thwarted, Bell disappears with the ring of the Bell, signaling he’s not done yet with the series or messing with the Fringe division.

Meanwhile, the big surprise – SPOILERS BEWARE – is Walter shoots Olivia in the head. It’s the only way to stop the process, because she’s the energy source. Of course, Olivia isn’t dead, because there’s so much Cortexiphan in her system, it can regenerate tissue if the bullet could be removed (hence the lemon cake set-up last week).

Oh, and this one isn’t that much of a surprise – Olivia is pregnant.

The friendly Observer also makes an appearance and warns Walter that the others are coming – which again, seems like a callback to “Letters of Transit.”

It’s clear, the Observers taking over our world will be the anchor of Season 5. And with only 13 episodes, it will be sad to see the series rush through so many storylines to get to the finish line, but 13 is better than none.

While “Brave New World – Part 2” wasn’t as strong as previous season finales, it still serves as ample pay-off to burning questions we’ve been wondering all year. And in a weird way, it would have served as a perfectly acceptable series finale if that were the case.

FRINGE doesn’t do things the easy way – and you really have to pay attention to catch all the references and callbacks. It’s something that obviously frustrates short-term fans, but is a delight to those who are knee deep into the mythology.

That said, to get five years of such a wonderful show is a blessing, and like CHUCK, at least it gets to go out on its own terms, instead of being unceremoniously canceled before it’s time is up.