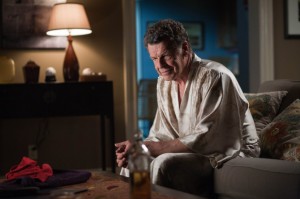 It’s more “Over There” action with FRINGE as “The Consultant” finds Walter (John Noble) traveling to the other side to help Bolivia (Anna Torv) and Lincoln (Seth Gabel) figure out why people dying in one universe, are resulting in similar deaths in the other universe.

Naturally, David Robert Jones (Jared Harris) is at the heart of this – essentially creating a device that tests out whether events in both universes can be merged – with the intent on destroying both universes and collapsing both of them for full-on destruction.

As was discovered last week, Colonel Broyles (Lance Reddick) is the mole inside Fringe division and soon Bolivia (Anna Torv) uncovers the truth. Of course there is a reason for Broyles’ deception – he’s trying to save his sick child and Jones is providing him with a cure that is allowing his child to live. It comes with a price though – Broyles must now be a traitor to his own division. And, Jones is calling upon him to do something that could destroy both universes.

The pleasures of this episode come from the great interactions between Bolivia and Walter – especially when Walter stays with her for the night at her place. Broyles and Walter also have a great conversation about the questionable things they done to save the ones they love.

I also like the arc Lincoln is getting – especially now that he’s staying on the other side to help Bolivia uncover who killed Alt. Lincoln.

The only probably with “The Consultant” is that it feels like half an episode. It’s more character based (which is good), and less story driven this time out (which might be frustrating to casual FRINGE fans). The story is a simple one – focusing on Broyles, but the pay-off is too abrupt. It feels like the episode needed another 45 minutes to wrap things up. And next week’s episode about the Observers looks to be a standalone unto itself.

Once again, FRINGE delivers in surprising ways. It’s a show that keeps getting better. And even if “The Consultant” feels like an uneventful episode, many important things are happening. I just want a little more David Robert Jones and faster progression as to what he’s really up to.

That said, next week’s Observer-centric episode where they take over our worlds in the future looks absolutely phenomenal.

Tags: A Better Human Being, A Short Story About Love, Akiva Goldsman, Alone in the World, And Those We Left Behind, Anna Torv, Blair Brown, Everything In Its Right Place, Fox, Fringe, J.H. Wyman, Jasika Nicole, Jeff Pinkner, Joe Chappelle, Joe Flanigan, John Noble, Joshua Jackson, Lance Reddick, Michael Cerveris, Michelle Krusiec, Neither Here Nor There, Nothing As It Seems, Romy Rosemont, Seth Gabel, Stargate: Atlantis, Stephen Root, Subject 9, The Consultant, The End of All Things, Wallflower, Welcome to Westfield