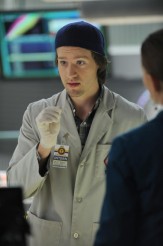 The baby is sweet, the set-up is good and it gets rushed after that 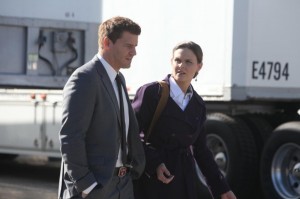 It was probably a safe bet that many BONES fans wanted to see new parents Brennan (Emily Deschanel) and Booth (David Boreanaz) adoring their baby Christine, so the episode “The Bump in the Road” opens with that. It’s fine – the baby is indeed very cute and Brennan in particular has a very in-character way with the infant. There’s also a running gag with the Jeffersonian day care center that’s amusing, but it starts getting a little out of control by the end, when Angela’s (Michaela Conlin) rule-breaking in bringing her baby son Michael into her work room inspires Brennan to decide she’s going to bring Christine into the lab with her. For a mom as conscientious as Brennan, this seems an unlikely decision, as the combination of human remains and the lab chemicals would seem to pose any number of health and safety hazards.

This aside, “The Bump in the Road” crams a few too many subplots together here. When human body parts are strewn across a stretch of road, Brennan and her team deduce that the corpse was dragged by a semi truck. Booth’s eager-beaver FBI associate Special Agent Genevieve Shaw (Tina Majorino) is able to pinpoint the specific truck, and soon the victim is identified as a woman who was into extreme couponing. The perpetrator turns out to be a grocery store manager who struck the woman with his clipboard, but was unaware that she then hid under a truck from him.

Meanwhile, intern Finn Abernathy (Luke Kleintank) falls for lab supervisor Cam’s (Tamara Taylor) adopted daughter Michelle (Tiffany Hines), which doesn’t sit well with Cam. Finn’s old-fashioned manners at first dictate that he not date Michelle against her mama’s wishes, but then Michelle’s wishes take the forefront and Luke declares that he’ll quit his job if that’s what it takes.Cam appreciates the strength of Luke’s feelings and relents.

This last subplot is a head-scratcher. Taylor should certainly be getting more screen time and more to do, but this is so isolated from the rest of the storyline that it doesn’t really service her character. Furthermore, spending this much time on two infrequently recurring characters, with everybody in the episode suddenly mentioning age (Mary Pat Gleason as a fed-up cashier is especially funny), makes this feel a little like a hasty effort to cram in a few younger characters and romance in order to entice younger viewers now that BONES is in Season 7. This isn’t what the series is about and the whole situation is so off to the side that it feels like it’s taking valuable time from the real show. In contrast, Shaw’s revelation to Booth that she is a single mother is clean, affecting and in keeping with the theme of how working parents cope that is relevant to many of the main characters.

Brennan’s post-partum issues are valid, though as mentioned above, her solution doesn’t seem practical (or healthy for little Christine). The piecing together of the mystery – and the victim – does provide an interesting forensic puzzle, though it is more hurried than usual, due to the need to spend time with the episode’s other aspects.

The result is an episode that is agreeable, but – per its title – somewhat bumpy in its rhythms.