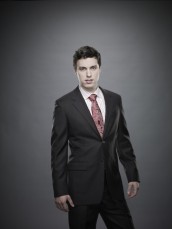 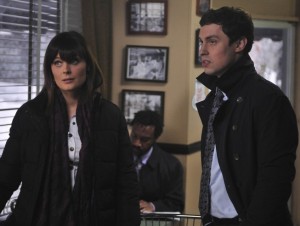 On BONES, shady guest characters have a tendency to underestimate the professional skills of Dr. Lance Sweets, the youthful clinical psychologist who works with the team in profiling suspects – and occasionally profiles his colleagues, much to their discomfort. John Francis Daley (of FREAKS AND GEEKS and the Broadway production of the Who’s TOMMY), who plays Sweets, evaluates his work on the show for us.

ASSIGNMENT X: Did you do any research into being a mental health professional when you got this part?

JOHN FRANCIS DALEY: I just made sure to hang around a lot of mentally unstable people. In this business, it’s not that hard to find them [laughs]. No, we have a technical advisor who is studying to be a psychologist, so she fills me in on the technicalities. Aside from that, no, not much more research went into it.

AX: Sweets does a lot of things, particularly regarding his professional/personal relationship with the other regular characters, that a real psychoanalyst would lose his license for …

DALEY: Oh, yeah. I think every character on the show would get in trouble and lose their job if it were found out what they did over the course of [the series]. But yeah, I take a lot of liberties and usually they pay off. I like to think that I’m the Serpico of psychologists [laughs].

AX: Are you hoping that Sweets will ever get a gun?

DALEY: Absolutely. I like to think that Sweets is secretly packing throughout [laughs].

AX: A lot of BONES finds the main characters examining human remains. Has there been anything on the show that’s grossed you out?

DALEY: Well, as far as being grossed out, I think the closest I ever came to being grossed out by the bodies on the show was an episode where they find the body in a vat of used cooking oil, and the skin just melted off the bones, and the dumping of the skin out onto the ground, and I was there for the shooting of that, because I was filming a scene afterwards, and I got to see firsthand what they were working with, and it was really, really disgusting. It was out in this alley and there were cockroaches everywhere. That wasn’t fake. There were no wranglers standing by to take in the cockroaches.

DALEY: Free-range cockroaches. Probably trying to get their vouchers.

AX: When the writers made Daisy Wicks, played by Carla Gallo, a love interest for Sweets, this might be a question for the writers, but do you know if they were they thinking, “We would like a love interest for Sweets, and who would be appropriate?” or were they thinking, “We like this actress/character and what can we do with her so that she’ll have more to do?”

DALEY: Honestly, I think it sort of came organically. She came onto the show I think because they liked her and she’s an interesting [character] and the relationship probably developed from there. But honestly, I don’t know. You’d have to ask the writers.

DALEY: I really enjoyed the death metal episode [2009’s “Mayhem on a Cross”] for my character, because I got to dress up like a freak. That was kind of fun. And you learn a little more about my back story and I worked with Stephen Fry [as Dr. Gordon Gordon-Wyatt], which is always a pleasure. He’s very cool and incredibly smart, and he has something interesting and knowledgeable to say about pretty much any topic.

AX: Are you a death metal fan in real life?

DALEY: [laughs] No. Death metal I just can’t listen to.

AX: Have there been any scenes that have been difficult for you to play?

DALEY: Well, yeah. I mean, the most difficult for me is usually [laughs] some of the lingo that my character uses, there would be long sort of speeches, psychoanalyzing of a particular suspect. Some of the words are so difficult to use in a sentence, just because they’re very wordy.

AX: How would you describe BONES as a series?

DALEY: I love the show. I think it’s such a charming, light procedural dramedy, which is refreshing amongst the sea of super-serious crime dramas. So [as a viewer] it’s nice to have a little change like that.