Home » TV Review: BONES – Season 6 – “The Killer in the Crosshairs” 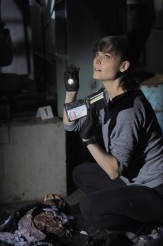 TV Review: BONES – Season 6 – “The Killer in the Crosshairs”

Most BONES episodes hew to a fairly specific and usually agreeable formula. This is the case with “The Killer in the Crosshairs,” which has as its serious A plot Booth’s (David Boreanaz) continued search for former military sniper colleague-turned-vigilante Jake Brodsky (Arnold Vosloo). Booth is consciously worried that his literal-minded partner Brennan (Emily Deschanel) seems to equate the two men and doesn’t understand that Booth in fact does mourn for the lives he has taken.

In the B story, Angela’s (Michaela Conlin) eccentric musician father (Billy Gibbons of ZZ Top) breezes into town, declaring that he’s come up with the perfect name for Angela’s unborn child, which understandably makes both the expectant mother and her husband Jack Hodgins (T.J. Thyne) a little apprehensive, especially given that Dad has once before left his son-in-law unconscious on the side of the road with a new tattoo.

In the procedural aspect of the episode, the team tries to figure out what kind of futuristic exploding bullet Brodsky is using, and then use a set of specs to try to determine where he’ll strike next.

The through-line of Booth doing a lot of soul-searching about what, if anything, separates him from Brodsky is handling with nuance and grace. Although some blanket statements are made, the episode leaves room for both the character and the audience to draw their own conclusions, and Boreanaz does a good job of conveying Booth’s ambivalence. Deschanel, who sensitively modulates Brennan’s balance of innocence and normalcy to suit how literal-minded the character is being in a given situation, handles their character interactions with nuance, letting us see how Brennan is processing both the facts and her unconditional acceptance of Booth.

As a bonus, psychiatrist Sweets (John Francis Daley) (a character who normally makes this reviewer cringe because in almost every episode, he does things that would cause revocation of the license of any real-life mental health worker) actually behaves and speaks like a professional in a scene where Booth comes to him for some perspective.

The Angela/Hodgins subplot takes place in what is a heightened reality even by BONES standards, but Conlin and Thyne are so deftly comedic and Gibbons has such an appealingly intimidating manner that it’s easy to just roll with it and enjoy it.

“The Killer in the Crosshairs” (the title works in more than one way) is a fine episode in terms of exploring Booth’s character. The procedural aspects aren’t especially compelling, but then, that’s seldom the point on BONES.

Agree? Disagree? Let you voice be heard – COMMENT BELOW