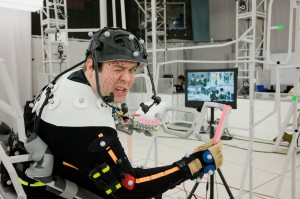 After making an impression with his starring role in the hilarious BALLS OF FURY, Dan Fogler has been moving up the ladder as a stand-out in such films as FANBOYS and the recently released TAKE ME HOME TONIGHT.

The actor gets to stretch even further in the new 3D CGI animated Disney Film MARS NEEDS MOMS where he plays Gribble – an adult who was stranded on Mars in the 1980s as a kid. Now has a chance to right some wrongs by helping a new kid named Milo who has arrived to the Red Planet and wants to save his Mom from some bad Martians.

The role required Fogler to embark on the performance capture technique employed on such films as POLAR EXPRESS and BEOWULF and he also worked extensively with Seth Green (who plays Milo, but doesn’t voice him).

Fogler spoke with ASSIGNMENT X about his work on this ambitious new children’s film and also hinted he wouldn’t mind seeing a BALLS OF FURY sequel down the road.

ASSIGNMENT X: Is it weird seeing yourself translated into this animated character?

DAN FOGLER: It’s like a computer puppet of you, almost a clone of you – like a John Goodman sized clone of myself. It’s very surreal to see the little bips and boops and the little subtleties. It’s almost ultra-real. Halfway through the process I realized, the more loose I am, the more believable it’s going to be.

AX: There aren’t a lot of comedians who can do drama as well as you do in this movie.

FOGLER: I learned early on, I would be a happy guy if I could play sad clowns the rest of my life, because all the comedy comes from a real place. It’s hiding something. And when you get through the pain, it comes to the surface – it’s heart-wrenching.

AX: Since the pop culture references are 1980s specific for your character, did you have to bone up to make sure you were on the right pop culture timeline?

FOGLER: They had to keep track of whether I stayed within the 1980s, which is where my character stopped progressing. He still thinks Reagan is the President. I just did TAKE ME HOME TONIGHT which is very ‘80s oriented. I love that decade. Those are my formative years. I was born in 1976, so I was in middle school in the ‘80s. It was not hard for me to tap into that. It was fun for me.

AX: It was really fascinating that they used Seth Green’s performance capture to play the kid – did that make it easier for the camaraderie between the two of you?

FOGLER: We were stuck there. We were doing our stunts and getting flung around in harnesses. He was doing a tremendous amount of anti-gravity work. I couldn’t see an actual kid able to throw themselves into this as much as he was able to. Of course, we were fast friends on set. 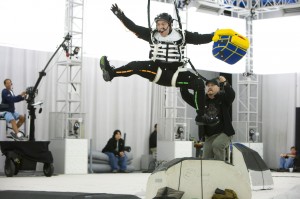 AX: Why did it take for long for TAKE ME HOME TONIGHT to come out?

FOGLER: They had a screening for it three years ago and everyone loved it. Everyone thought this was a seminal film – the DAZED AND CONFUSED of the 1980s. Then a very high up producer on the project turned around and said, “we are being irresponsible with all the cocaine use in the movie.” I guess that was around the time when Lindsey Lohan was making a bit of a ruckus and young Hollywood was getting out of control.

I’m so proud of that movie, and I feel my whole career has been on a shelf because of that one decision for a couple of years and that’s very frustrating. How can you do an ‘80s movie and not include the cocaine in it. It’s a party movie about the ‘80s. We’re so P.C. now, it’s tough, when people are super-duper sensitive. We’re all able to make our own decisions. I’ve never done cocaine in my entire life, still, you make the distinction of a film and real life. Hopefully people can do that. This producer didn’t think people were mature to handle it. This is like a lost John Hughes movie. It feels very authentic.

AX: Can you tell me about this Alfred Hitchcock movie you’re doing?

FOGLER: I play a young Alfred Hitchcock and the movie is NUMBER 13. It’s in pre-pre-pre production, and it’s like SHAKESPEARE IN LOVE with Hitchcock. It’s a dark comedy, and you see him struggling to figure out what his niche is in the film world. He’s making these comedies that are not so funny. He realizes with a little bit of editing, they can be incredible thrillers. He meets people along the way and has interactions and you see how he gets the impetus for future movies.

AX: Are you doing your own take on him?

FOGLER: Everyone knows him as this stuffy, dead-pan, 80-year old man, but if you watch old footage of him, he’s full of life. I’m going to be true to his age, of course, and there’s enough footage of him in the ‘20s. He was a bit of a cad.

AX: Is there any hope for a BALLS OF FURY sequel?

FOGLER: We’ll see. If these movies do well, people may look back on FANBOYS and BALLS OF FURY and said, “maybe this is worth revisiting.”

AX: Do you have a title?

FOGLER: I would want it to be, like Dos Equis, it would be DOS BALLS OF FURY.