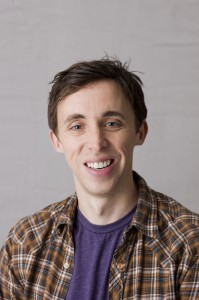 For actor Kevin Cahoon, it was a process he relished as he plays a Martian character called Wingnut – the sidekick to Gribble (Dan Fogler) who doesn’t quite understand the idea of what being a sidekick is supposed to be.

With a performance that’s largely physical, rather than verbal, Cahoon spoke with ASSIGNMENT X about the process and how his Broadway stage work came into play while filming MARS NEEDS MOMS.

ASSIGNMENT X: It’s must be weird talking about a movie where you don’t speak English throughout the entire movie.

KEVIN CAHOON: Right, we have our crazy Martian language we made up. I played the role of Ed the Hyena in the original Broadway cast of THE LION KING and they were very similar, in that they did not speak really. They were non-speaking roles and it’s almost like silent film. You have speak with your heart and soul and face, and you have to act as if you have dialogue with everyone else. I think that’s where you find the humanity, or the martiananity, of the character.

CAHOON: I was given sides and it said, “create your Martian language and play the scene.” It was the first scene where I was on the monitor with the popcorn box and the second scene was towards the end with the babies and the helmet. You just have to play it and jump off a cliff. I remember walking into the lobby after the audition and my clothes were disheveled, I’m sweating and I was like “what just happened in that room?” I was on top of the desk, I was picking the casting directors hair. I was throwing the papers off the desk. I embraced the fact that he’s a monkey with ADD.

AX: Having done Broadway, was it a little more comfortable doing something like this?

AX: Did they use your mannerisms as a template for the other Hairy Tribe Martians?

AX: I’m assuming you can do more physical things with your body than most actors?

CAHOON: I’m not a contortionist by any means or a gymnast like some of those great actors are, but I think I also feel like I’m sort of fearless and not afraid to make a fool of myself. That lends itself to doing odd things that other actors would not feel as comfortable doing.

AX: How much time did you spend doing this performance?

CAHOON: I was probably there six weeks total.

AX: Was the character called Wingnut when you went in?

CAHOON: Yes, Wingnut was in the bag already. That informed me. Gribble probably wanted a wingman, as in a C3PO, Major Domo kind of way and what he ends up with is Wingnut who is the exact the opposite. You would give him no responsibility, unless that responsibility was to nature, take care and love.

AX: What did you think of the finished film?

CAHOON: I was blown away. It’s beautiful. The technology is incredible and the IMAX is awesome. I was so impressed with the score, but also the heart. I got misty-eyes towards the end with the mom/Milo relationship. I thought it really connected in a wonderful way and am so honored to be a part of it.

CAHOON: I’ve known Dan from New York for years and I’ve known Seth [Green who plays Milo] for years. I was friends with both of them already. Dan and I have done theater stuff together in New York. We had an instant friendship already.

AX: How did the Martian language evolve?

CAHOON: Initially, we spent a day or two on the soundstage. There was a list of words like “disdain” and “joy” and each of the actors would give the interpretation of that word. They would go back, listen to everything from the day and pull out what they liked from each actor for those words and they created a Bible, and from that Bible, they created big cards and it was written out phonetically, like “ka-ka-ki-ki-ka” means “go to the door.” It was a dictionary.

AX: Was it chaos when you were shooting on those performance capture stages?

CAHOON: There’s a beginning, there’s an end, and you know what needs to be accomplished in the middle. Other than that, you’re really free. 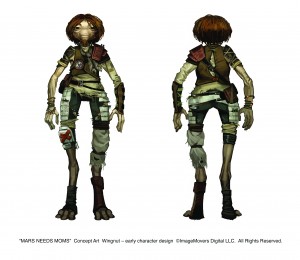 AX: What did you learn about your animated self, that you didn’t realize about you as a performer?

CAHOON: What I think shocked me, was how still Wingnut was. I could see that Wingnut was listening to the other characters, and I don’t really remember that being part of the process. He listens, he’s still and he’s astute. You may discount him as this crazy hyper monkey person, but he’s on it. He’s tuned in, when he needs to be tuned in. He saves them through that third portal in the middle.

AX: What was the toughest thing to do?

CAHOON: I’m about to go to New York to do a new musical call THE SHAGGS: PHILOSOPHY OF THE WORLD at Playwrights Horizon, which is an awesome theater company off Broadway. I start that in April. I also have a tiny part in a movie called W.E. that Madonna has directed about Wallis Simpson [and the Prince of Wales]. I think it’s going to be at Cannes.

AX: How was it working with her?

CAHOON: I didn’t know what to think. I never met her through the audition process, but she was accessible, smart and let me create and improvise. I was really, really impressed.

AX: You’ve worked with Julie Taymor before on THE LION KING musical, what is your take on all this SPIDER-MAN: TURN OF THE DARK musical controversy? We’re isolated from it, because we’re here in Los Angeles. All we perceive it to be is this out-of-control bizarro thing in New York.

CAHOON: I think it is the first social network musical in that, that’s how people are communicating now. When something happens in the theater it spreads like wild flowers. People love it and want it. The amount of press this musical has gotten, is far more than any other musical that I can ever remember, and I was in THE LION KING which got a lot of press. I’m so anxious to see it. I haven’t seen it yet, and there are so many brilliant people of pedigree on it between U2 and Julie.

AX: But the argument is, people are paying for the previews at regular prices.