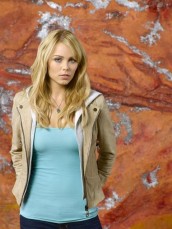 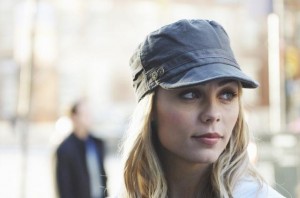 On ABC’s V, the humans may think they have problems with the invading Visitors, but there’s a lot of internal strife going on with the extraterrestrial reptiles as well. Anna, played by Morena Baccarin, is fighting to hold on to her position as supreme leader, while her mother Diana (played by Jane Badler of the original V series) forms an alliance with Anna’s daughter Lisa, played by Laura Vandervoort (pronounced VAN-der-vort).

Before she was ever cast as Lisa, the Toronto Vandervoort was already familiar to audiences from her role as Kara, aka Supergirl, on the CW’s SMALLVILLE. The actress talks about both roles here.

ASSIGNMENT X: Has V evolved about the way you expected it to when you first signed on?

LAURA VANDERVOORT: It surprised me. When I first got the role, she was a guest star, and then a few episodes in, I found out she was the queen’s daughter and since then, it’s really progressed, and this season, I’m really excited to where Lisa’s gone. She’s more independent, she’s strong, she’s making her own opinions, she’s ready to take on the throne.

AX: And how is it having Jane Badler as Lisa’s grandmother?

VANDERVOORT: It’s great. It creates a whole new dynamic for the show, because Jane Badler was on the original, so the fans love that. Having a grandmother to ask questions and get advice from on the show has really been great. It allows her to have more knowledge.

AX: And she seems to be backing Lisa for the throne …

VANDERVOORT: You’ve got to look at it this way, if Grandma’s still alive, Anna shouldn’t even have the throne.

AX: Lisa has gotten badly beaten up. How was that to play?

VANDERVOORT: Oh, that was great. I know that sounds ridiculous, but I love that episode in particular, because it gave me the chance to show emotion. Lisa doesn’t show emotion in front of many [characters] on the show, so that was the first time you felt sympathy for her, the audience got to know her, and it was great. Any time I can do prosthetics and get bruised up and change my look, I’m very happy to do so. 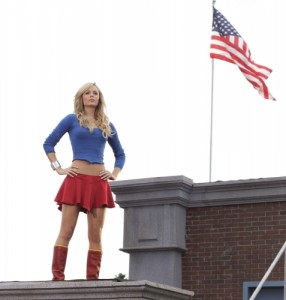 AX: Because they are both extraterrestrials, do you see any parallels between V’s Lisa and SMALLVILLE’S Kara (aka Supergirl)?

VANDERVOORT: That was one of the things I was concerned about when I first got cast. “Oh, I don’t want to play another alien, people are going to think it’s going to be a typecasting situation,” but really, the only similarities are that they both come into a world with little knowledge. They teach themselves, they learn from other people, and then they become very strong, independent women, but other than that, there aren’t many similarities.

AX: James Marsters, who played Brainiac, said he really enjoyed fighting with you on SMALLVILLE …

VANDERVOORT: I loved working with him. I have my second-degree black belt in karate, so I like to do that stuff. I like to kick some ass sometimes.

AX: Do you do martial arts recreationally when you’re not working?

VANDERVOORT: Yeah. I started doing martial arts when I was about seven. I haven’t done it in quite awhile because I’ve just been working, I couldn’t train, but I like to keep it up if I can.

AX: Does having that background keep you from getting hurt when you’re doing scenes that get physical?

VANDERVOORT: Yeah. Well, first of all, I’m so stubborn sometimes, I want to do all my own stunts. On SMALLVILLE, I did most of my own wire work, ninety percent of the time. I know how to protect myself if I fall, that sort of thing. I’m feisty, so I like to fight.

AX: Did you have fun teaching Superman to fly?

VANDERVOORT: Yeah, except it didn’t work [laughs]. So we’re going to try again one day, I guess.

AX: Will you be back on SMALLVILLE again in this final season?|

VANDERVOORT: You know, I already came back once this season for the episode called “Supergirl,” but I’m not sure if I’ll be returning again. They left the storyline open, so hopefully.

AX: You did the RIVERWORLD miniseries, playing a relatively normal person – well, you were involved in a sort of bizarre love triangle, but …

VANDERVOORT: I wasn’t an alien. 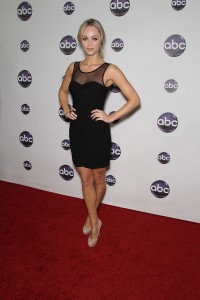 AX: Do you feel like you have a reputation as a science-fiction leading lady?

VANDERVOORT: I do think when you get into the sci-fi world, the fans are so great, you’ll continue to do sci-fi if you wish to, which is great. But I always want to mix it up. I’d love to get into the feature world and away from the sci-fi a little bit, I would love to do a period piece, a Western, an independent, because it’s nice to mix it up.

AX: What else are you involved in?

VANDERVOORT: I did a movie called THE ENTITLED [in 2010] with Ray Liotta and Kevin Zegers and Dustin Milligan, and I was a normal human being [laughs], and I just did a little cameo on a movie, THIS MEANS WAR, with Reese Witherspoon, Tom Hardy and Chris Pine.

AX: When you’re doing material that’s a little more down to earth, do you miss the heightened reality, or do you feel like you can relax a little more?

VANDERVOORT: The great thing about sci-fi that I love is, you can go over the top, it can be bizarre. Whereas when I get to play a human being, it’s nice, because I feel like I can relax, I can relax my body structure – because they’re so uptight in sci-fi. When I’m playing a human being, I can be more natural. Like I said, I just love to mix it up.